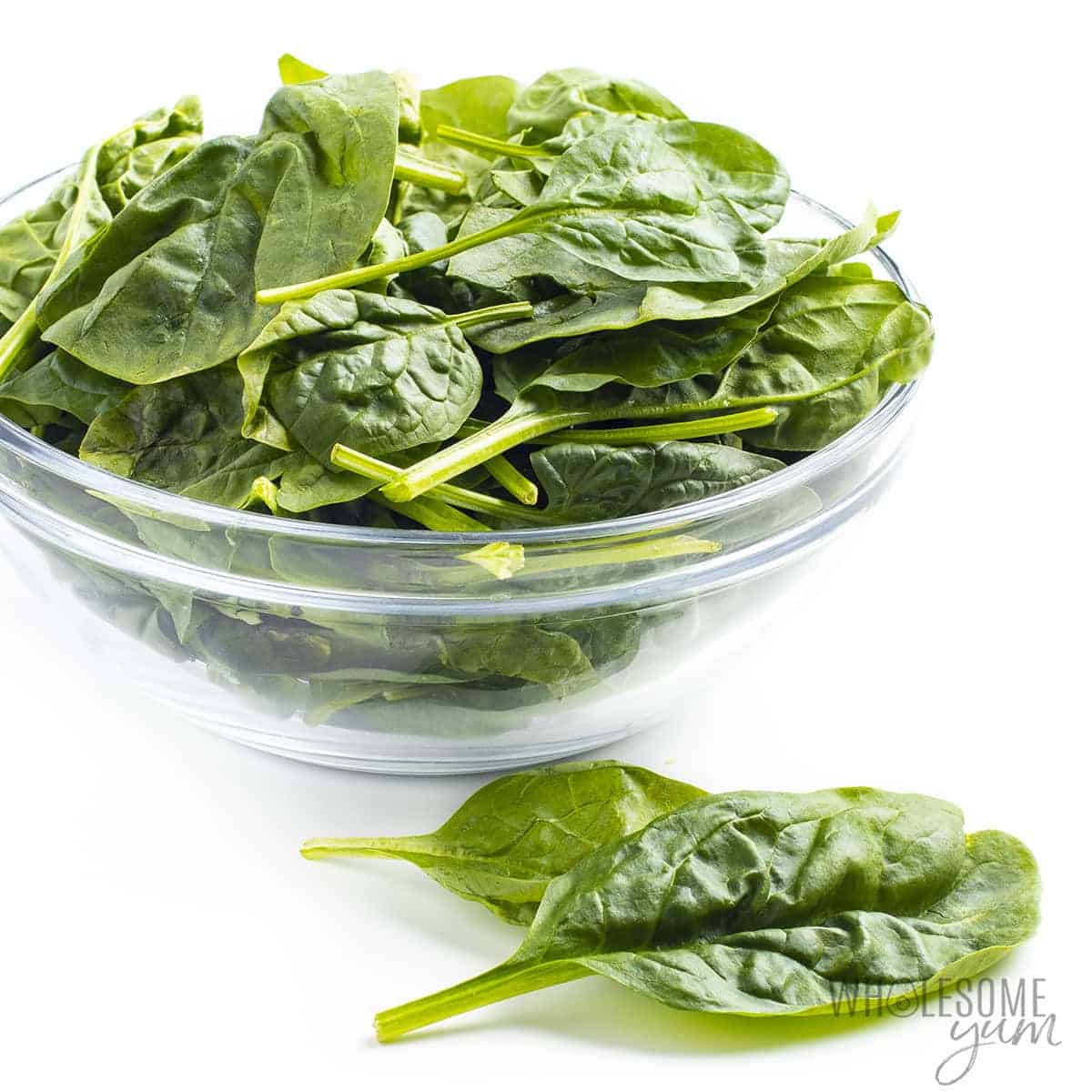 Most healthy diets encourage leafy veggies — but on keto, some vegetables (like corn, potatoes, or beets) can’t easily fit into this lifestyle. So, is spinach keto? Take a closer look at carbs in spinach, plus delicious ways to enjoy its flavor on keto.

Yes, spinach is keto! Carbs in spinach are very low, so you can enjoy it often with this way of eating.

Is spinach low carb? Definitely. You can have spinach often on any carb-counting lifestyle.

How Many Carbs In Spinach?

How many net carbs in spinach, though? Since it’s rich in fiber, the same 4-cup serving size contains just 1.4 grams net carbs.

How many carbs in cooked spinach?

How many carbs in a cup of spinach when it’s cooked? It’s still low! One cup of cooked spinach contains 7.7 grams total carbs and 3 grams net carbs [*].

How many carbs in baby spinach?

How many carbs in a spinach wrap?

Spinach tortilla carbs are also low, as long as you choose a low carb spinach wrap. One average wrap contains 18 grams total carbs and 3 grams net carbs [*] — however, keep in mind that this is a dirty keto way to enjoy spinach.

The chart below summarizes carb count for spinach in all its forms:

Top 10 Keto Spinach Recipes:
Pin to save for later!

The easiest keto spinach dip! With 10 minutes prep, you can open your oven to a gooey, tangy appetizer that all will love.

Get The Spinach Artichoke Dip Recipe

Is creamed spinach keto? It can be! This one uses a few simple ingredients and smothers spinach in a buttery, cheesy sauce.

Get The Creamed Spinach Recipe

Get The Spinach Salad Recipe

Keep spinach keto friendly by stuffing it into mushrooms… and skip the usual high-carb breadcrumbs that other recipes use.

Get The Spinach Stuffed Mushrooms Recipe

With a flaky crust and cheesy, savory filling, it’s hard to believe this is a keto spinach recipe!

Get The Spinach Pie Recipe

How many carbs does spinach have in a smoothie? This one is loaded with protein and healthy fats, with only 5 net carbs.

Get The Green Smoothie Bowl Recipe

Spinach makes this creamy soup even more satisfying, and it’s ready in only 20 minutes!

Get The Chicken Florentine Soup Recipe

Make it with spinach or broccoli! No matter how you prep it, everyone will love this combo of tender meat, bacon, and cheese.

Spinach forms the base of this pretty technicolor salad, complete with homemade vinaigrette!

Get The Rainbow Salad Recipe

Conclusion: Can You Eat Spinach On Keto?

Yes, you can and should have spinach on keto! The ultra low carbs in spinach make it a healthy choice to enjoy often. Try it in keto spinach recipes for even more flavor!

Carbs In Cucumber: Is Cucumber Keto?:
Pin to save for later!