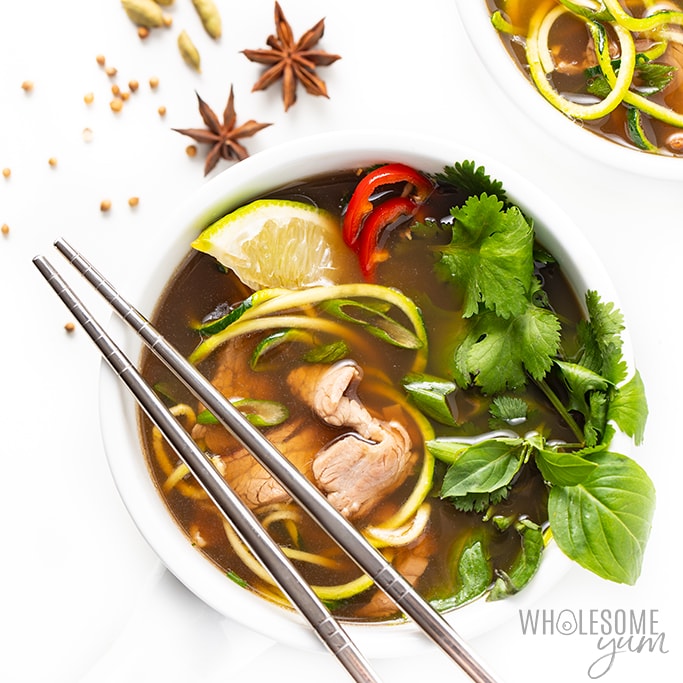 Anyone else missing takeout lately? ???? I wouldn’t normally recommend pho on a keto diet, due to the noodles and even added sugar. But a low carb keto pho recipe, made with zucchini noodles and monk fruit sweetener, was the perfect candidate for transforming an Asian takeout dish into a healthier version at home!

I had to “cheat” a little with my “10 ingredients or less” mantra, though, because pho has complex flavors and the broth alone needs lots of ingredients. Many pho recipes have 15-20 different components!

I wanted to keep this as simple as possible, while maintaining the flavors you’d normally expect in pho. So, since the toppings are all optional and personal preference, these are not included in the 10 ingredients. With the pre-made bone broth and noodles that cook quickly, this keto pho recipe is still much quicker and easier than traditional versions.

Let me show you how to make pho keto friendly, all in just 35 minutes from start to finish!

How To Make Keto Pho

We’ve established that pho on keto diet is possible, and lucky for you, it’s a great dinner that’s ready in just 35 minutes. Here’s how it happens: 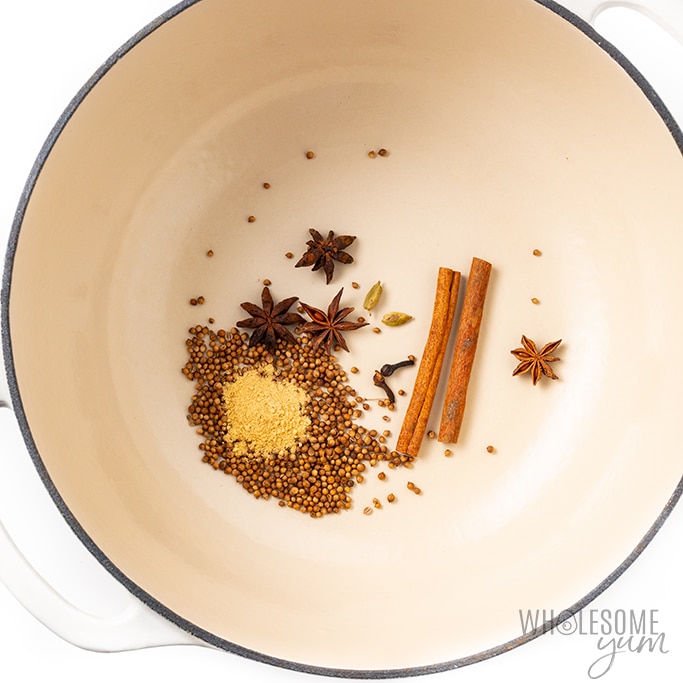 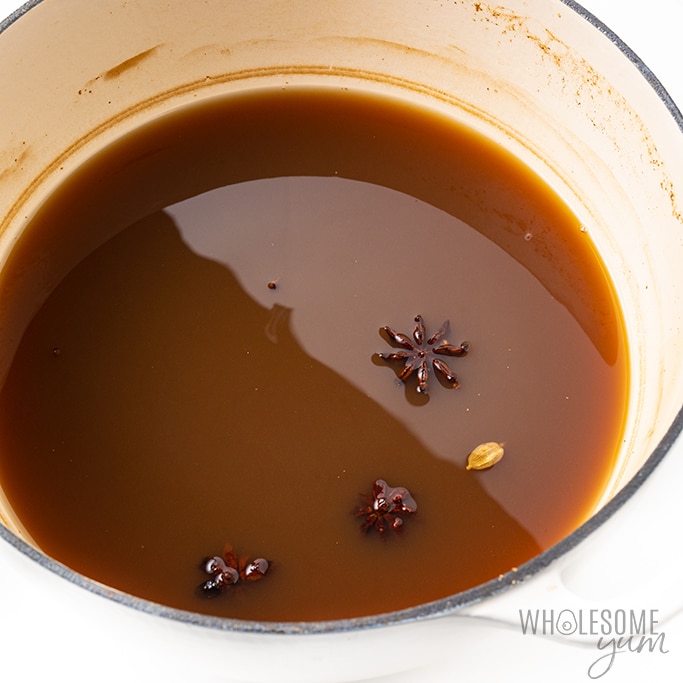 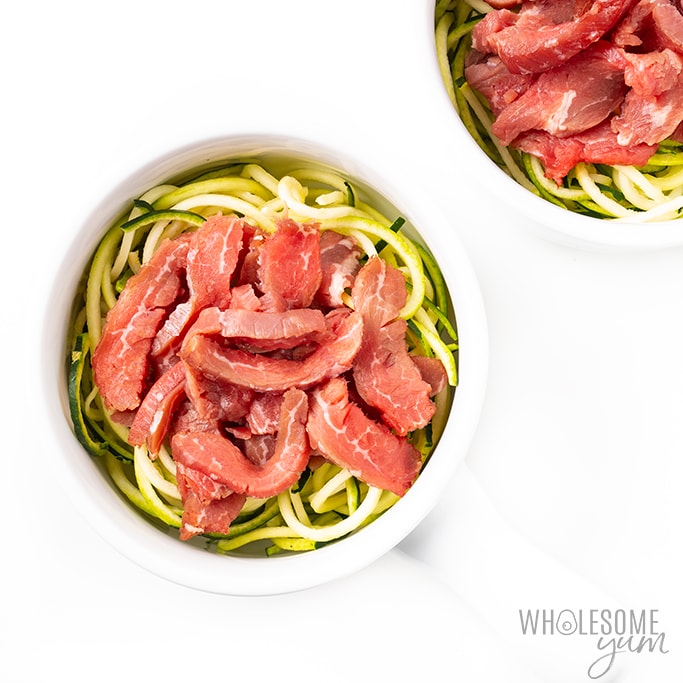 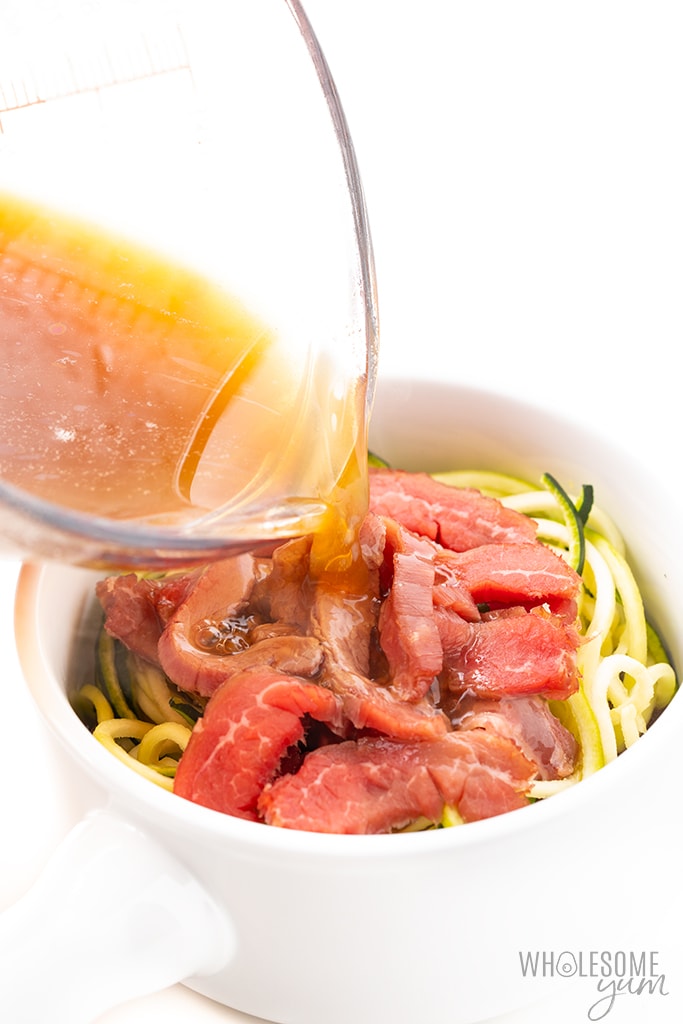 You can add as many or as few toppings as you like, but traditional pho has plenty of garnishes. I recommend: 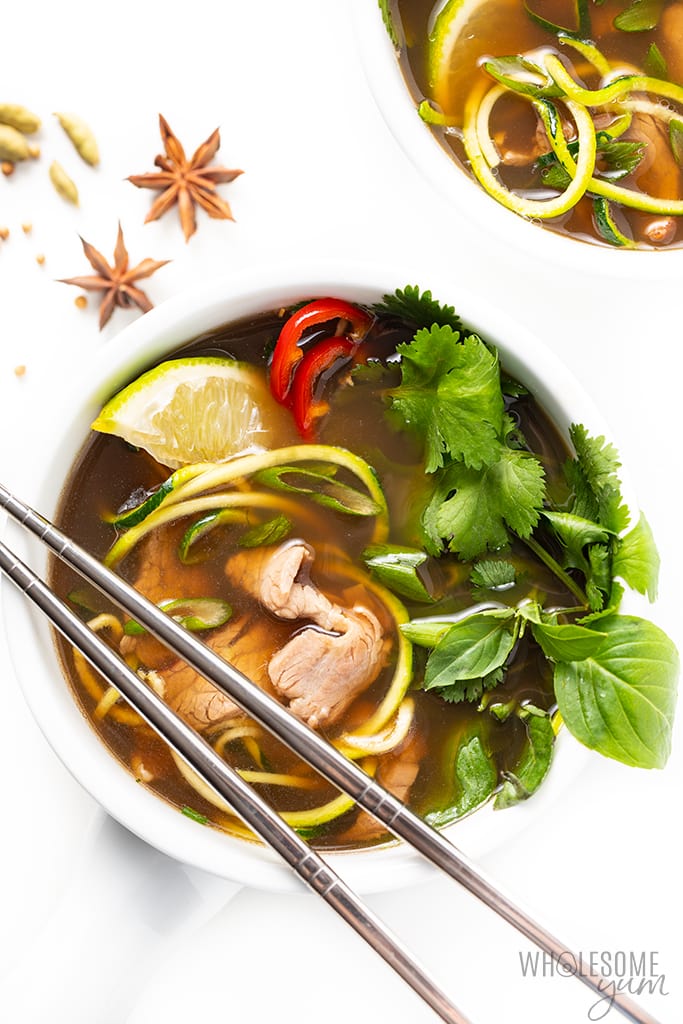 How do you eat pho?

You eat pho with chopsticks and a spoon. Use the chopsticks to dip the beef, noodles (or zoodles in this case), and garnishes into the broth, and use a spoon to sip the broth between bites.

Traditional pho is made with rice noodles and the broth even has sugar added – not keto friendly!

But my easy keto pho recipe is made with zucchini noodles and Besti sweetener in place of sugar. It has just 4.8 grams net carbs per 2 cup serving.

Can I use other cuts of steak?

Yes, you can use a lot of different cut of steaks in this keto pho recipe. I used flank steak as I had it on hand, and (bonus!) it makes this pho soup more reasonable in cost.

However, sirloin steak is often used as well, so feel free to use that if you have or prefer it.

Can I use chicken?

Yes, but it will take a little longer because unlike the beef, you’ll have to cook it.

Will the steak be raw? Can I cook it first?

As long as the steak is sliced very thinly (this is important!), pouring the simmering broth over it will cook it instantly.

However, if you are concerned about it, you can add the steak into the pot instead and cook the soup for a couple of minutes before serving.

Are there other options for keto pho noodles?

I much prefer the zucchini noodles. Because they cook so quickly when you pour the hot broth over them, you don’t have to cook them beforehand.

What if I can’t find some of the spices?

I tried to keep the spices and ingredients to a minimum in this keto pho recipe, but the ones I left in are pretty much required to get the right flavor profile.

The whole spices for pho are usually available at most grocery stores. If you prefer to order them, you can get star anise, cardamom pods, cinnamon sticks, whole cloves, coriander seeds, and ground ginger are all available online.

You can omit one of the spices if you absolutely have to, but it will definitely affect the flavor.

Is this traditional pho?

Almost. It has the same flavors, but I made 3 key swaps to make it keto friendly, faster, and easier: 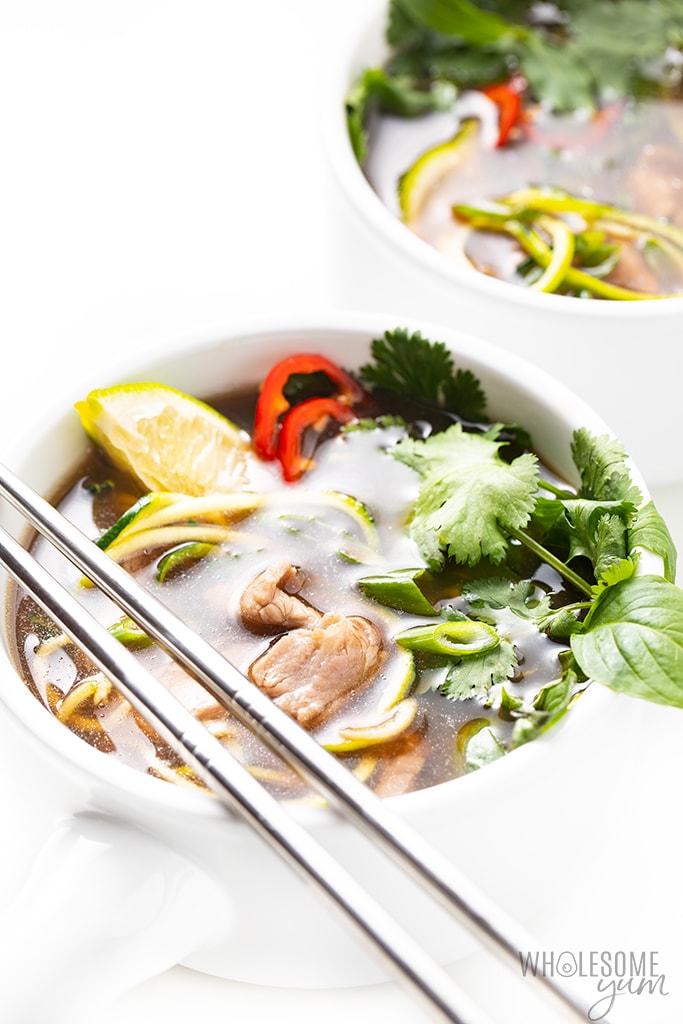 Can you make low carb pho ahead?

Yes, you can make the pho broth ahead and prep some of the soup ingredients. The broth is the most time-consuming step, so it’s a great way to prep ahead, but here are some other prep ideas:

How to store pho leftovers

Store the low carb pho broth in the fridge for 5-7 days.

The low carb pho noodles, beef, and toppings should all be stored separately in the refrigerator. When you’re ready to eat your keto diet friendly pho recipe, reheat the broth until simmering and prepare the same way.

Can you freeze low carb pho?

Yes, you can freeze the pho broth for 2-3 months. Obviously, we don’t want to freeze the fresh components.

How to reheat pho

Reheat the pho broth on the stove top until simmering, then pour over the zoodles and beef. 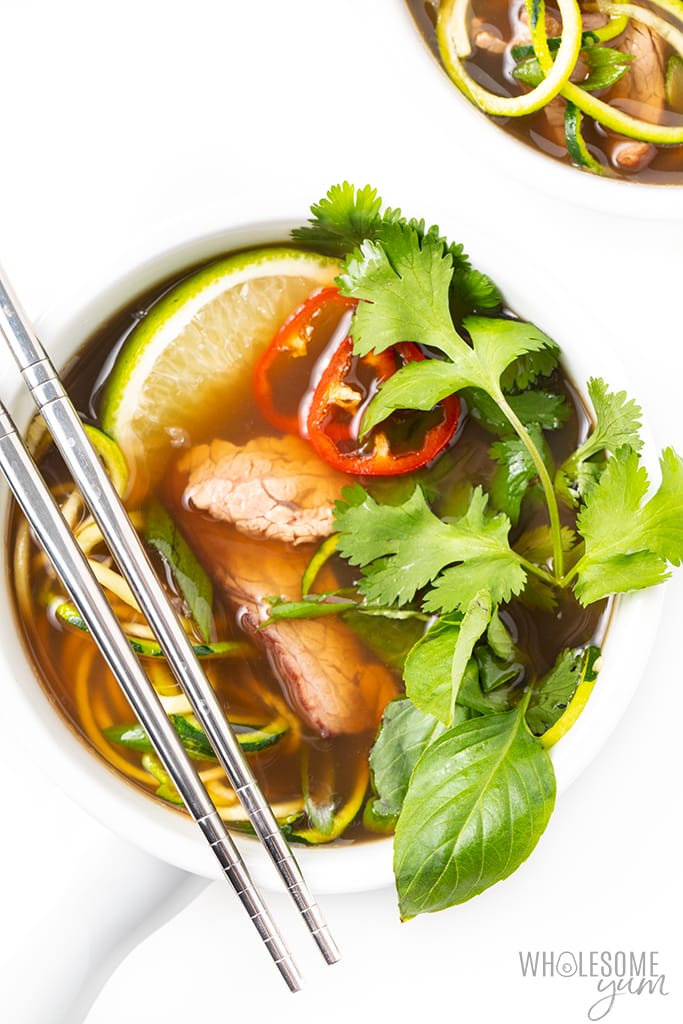 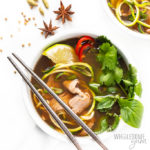 No need to spend hours, this easy keto pho recipe ready in just 35 minutes! Low carb pho with zoodles and steak tastes like the real thing from a restaurant.

Nutrition info does not include the whole spices, since they are discarded and not eaten. 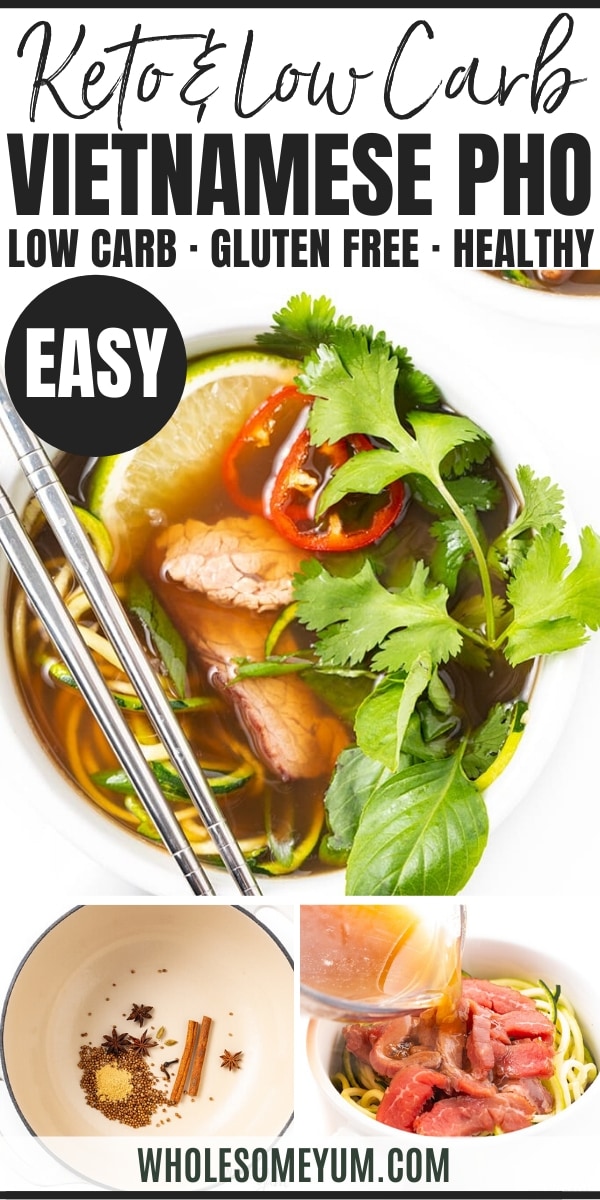