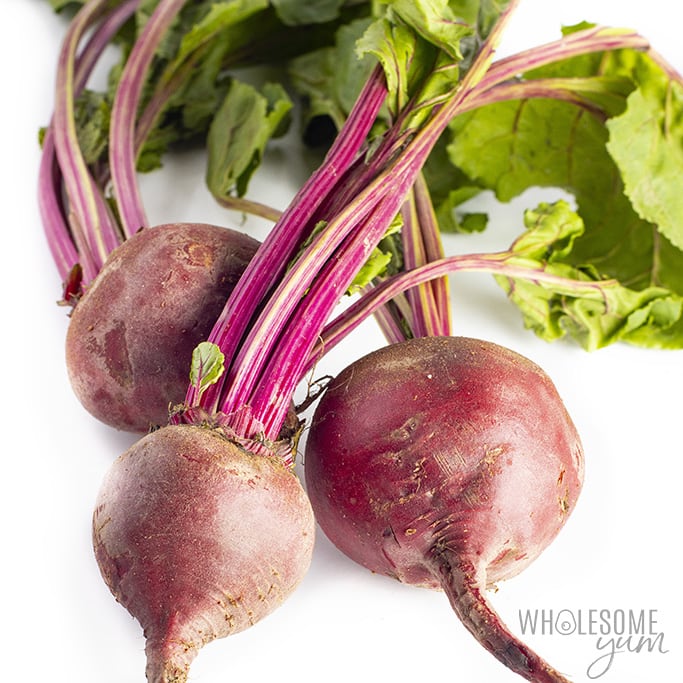 With a rich red hue and sweet flavor, beets are pleasing to the eye — but are beets keto? Let’s go over whether beets count as keto vegetables, including carbs in beets and when you can have beets on keto.

If you’re looking for more keto food references, try this keto food list (or take a look at these easy-to-use keto cheat sheets).

No, beets are not keto — at least, not in large amounts. A typical serving of beets would be too high in carbs for anyone following a strict keto diet, but they may fit macros in very small quantities. 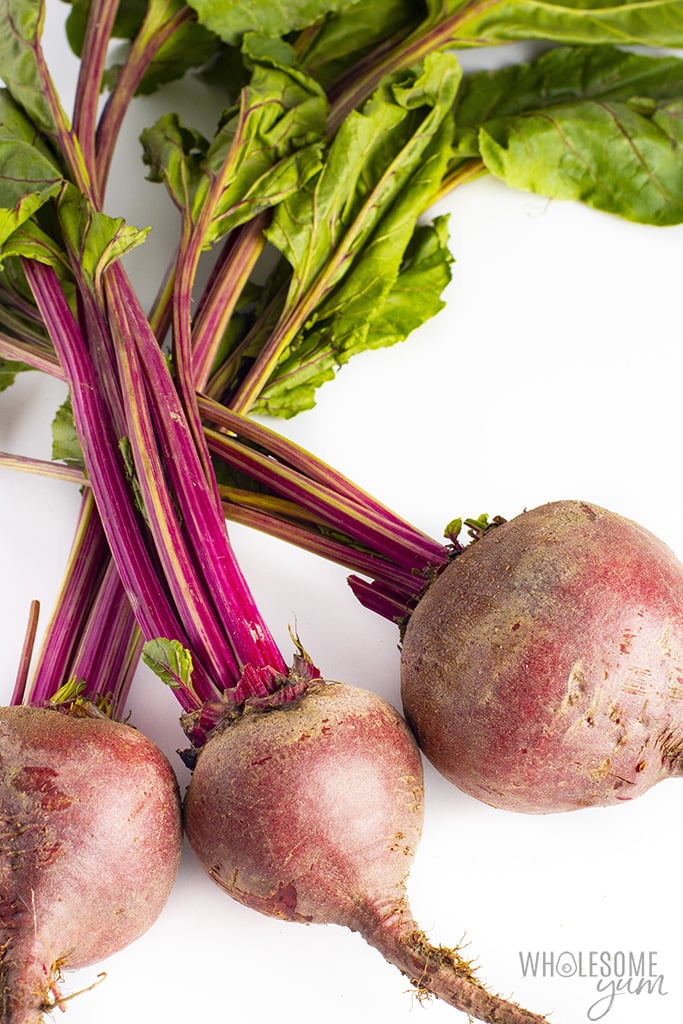 How Many Carbs In Beets?

If beets aren’t keto but fit in a low carb lifestyle, how many carbs do beets have? The answer depends on how you eat your beets.

As a baseline, consider raw beets. One cup of raw beets contains 13 grams total carbs and, since they have a few grams of fiber, net carbs in beets clock out at 9.2 grams [*]. Anyone eating beets on keto will take up nearly half their net carbs for the day with just one serving.

Can you eat beets on keto if they’re pickled? Some pickled foods are very keto friendly (like cucumber pickles), but with beets, the carbs are simply too high.

Do beets have carbs when juiced? Yes. An 8-ounce serving of beet juice can contain 23 grams total carbs and 21 grams of net carbs.

Are beets high in carbs when powdered? Yes and no. You’d realistically use beet powder in small amounts, so it’s keto friendly. This red beet powder contains 4 grams total carbs and 2 grams net carbs per teaspoon and works perfectly as a natural red food coloring.

Of course, don’t go overboard, since the carbs can add up if you use entire cups of beet root powder.

How many carbs in beet greens?

Are beets keto approved if you just eat their greens? Absolutely! 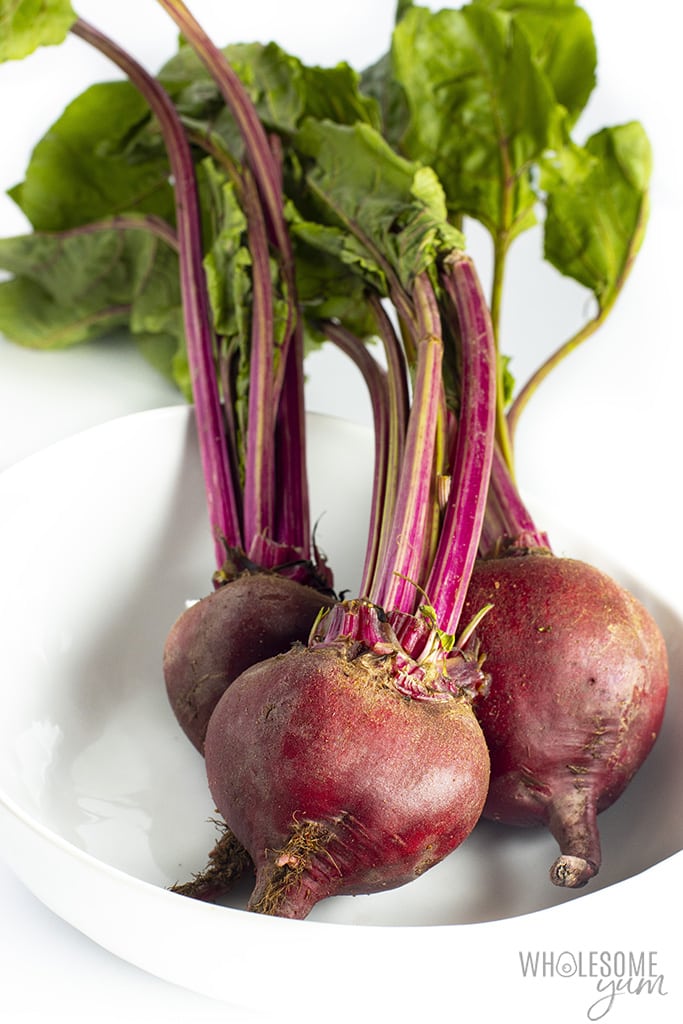 Nothing quite captures the look and taste of beets, but you do have options if you want to get color, crunch, or bulk in your recipes. 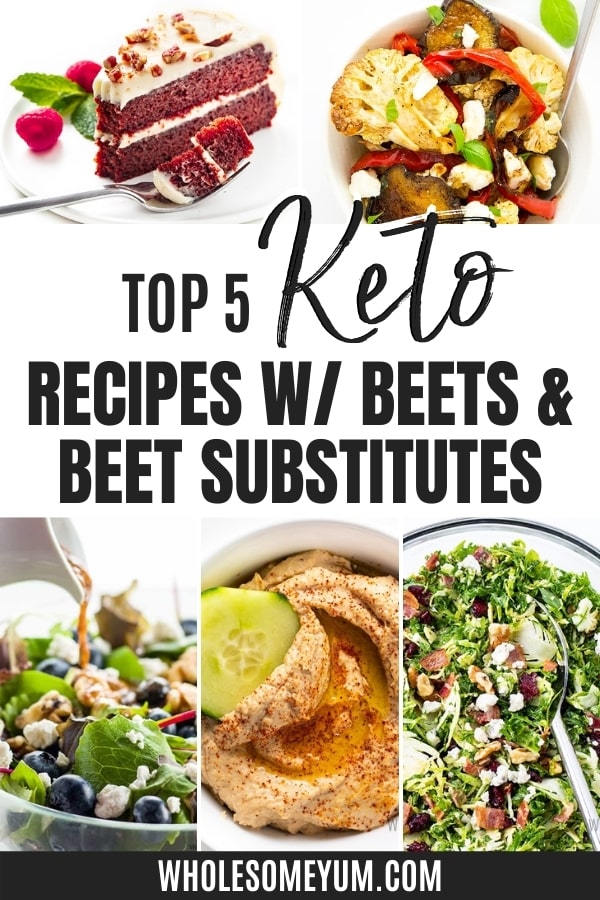 Keto Recipes With Beets And Beet SubstitutesPin It For Later!

If you do decide to eat beets on keto, you can incorporate small amounts in these recipes! (Keep in mind, most of these recipes do not call for beets in the ingredients list — but they would make a delicious addition.) 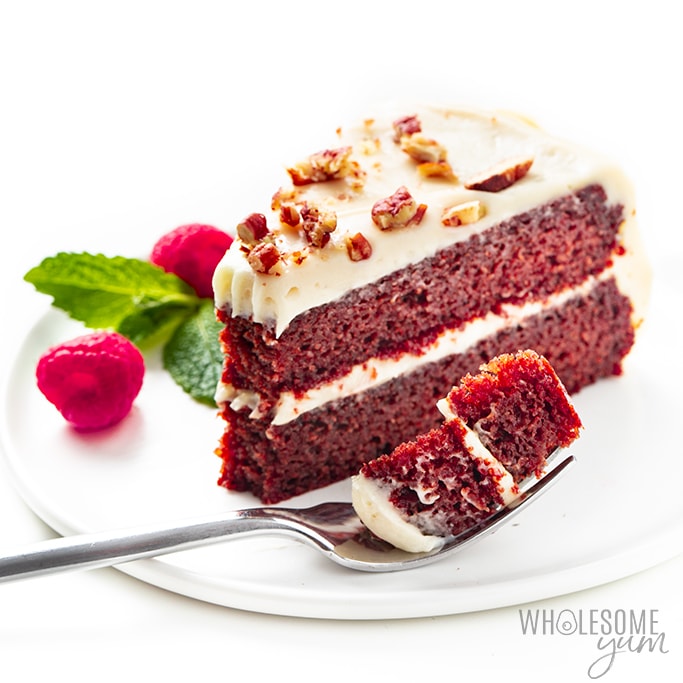 It has REAL beets, and they’re the secret behind the rich red color in this cake. 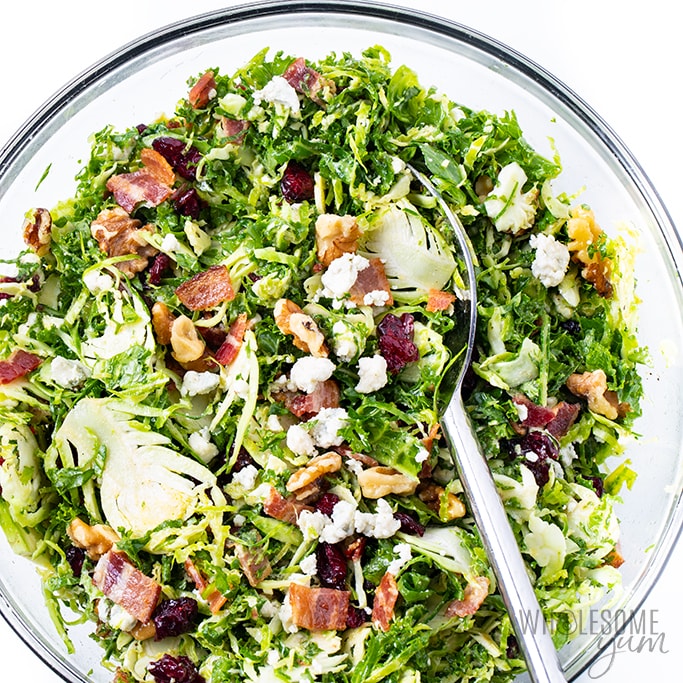 A small portion of raw, cooked, or pickled beets would pair perfectly with the smoky bacon, sweet cranberries, and blue cheese in this salad. 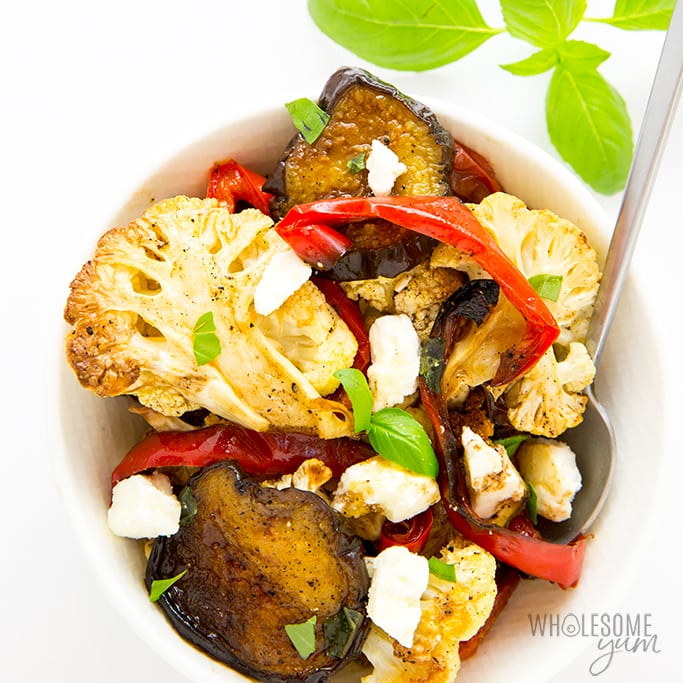 Beets love tangy, soft cheeses like feta — which is why a few slices would make a flavorful addition to this cold salad. 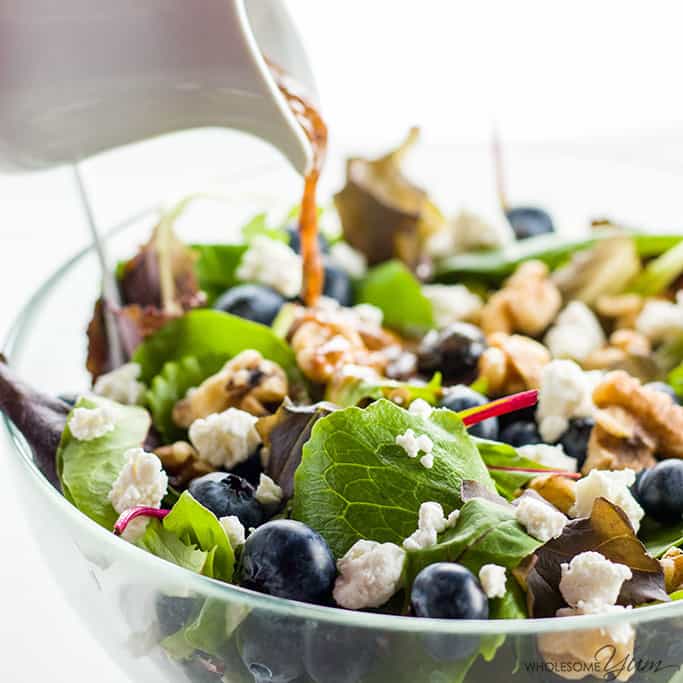 Trade keto-friendly blueberries for a small amount of cooked or raw beets — you’ll get big beet flavor without skyrocketing your carbs.

Get The Spring Mix Salad Recipe 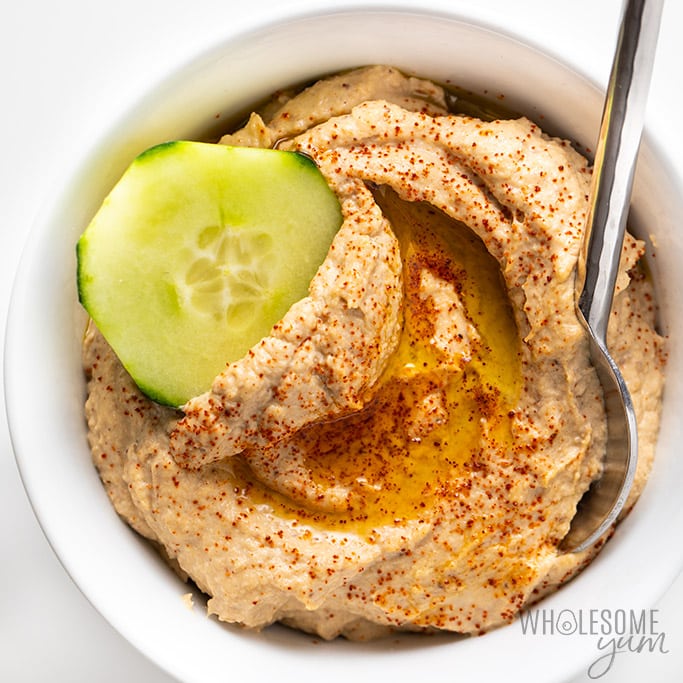 Roast a small portion of beets and blend them into this creamy, cauliflower-based dip!

Get The Keto Hummus Recipe

Conclusion: Can You Have Beets On Keto?

Although carbs in beets are high, you can have beets on keto if you pay close attention to your servings and eat them in very small amounts. (Or, just enjoy them as beet greens and beet root powder, which make it easier to stick to your macros.) When you do have beets, enjoy them! 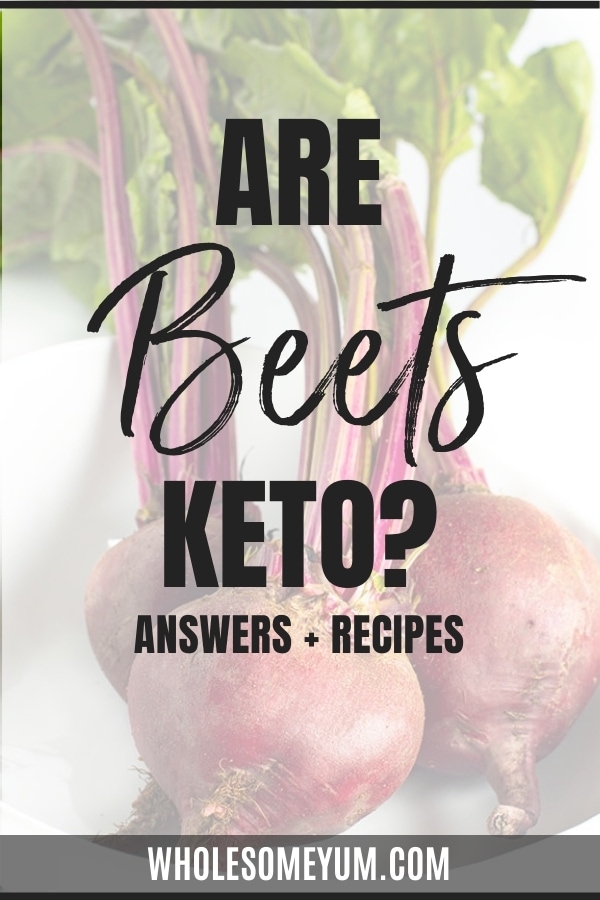