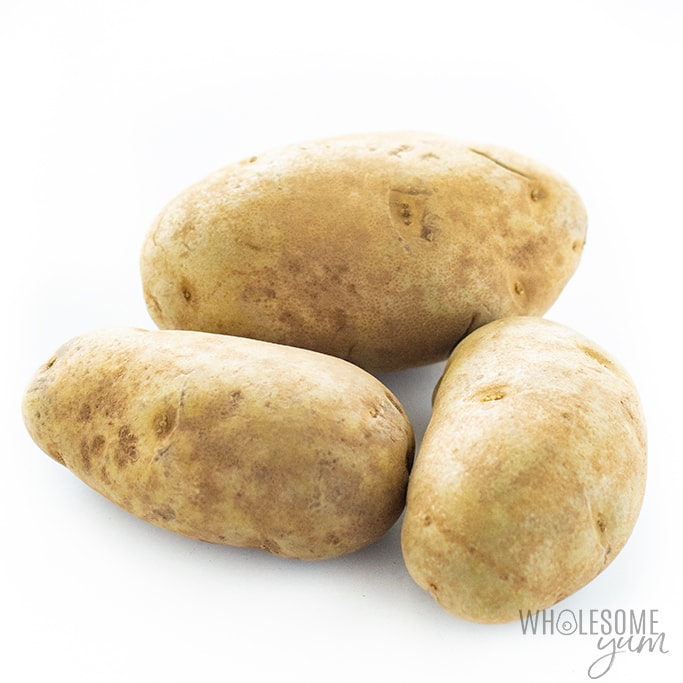 Potatoes are the gluten-free, vegetarian staple that pair with just about anything. But are potatoes keto? Find out if you can enjoy potatoes on keto here. To do that, we’ll cover how many carbs are in potatoes (hint: it’s a lot), and give you some delicious keto potato substitutes.

If you have more questions on whether certain foods are keto, consult this full keto food list… or get answers even faster with my keto cheat sheets.

No, potatoes are not keto friendly. Although they contain no gluten, they still have a high amount of starch and carbs in a serving. 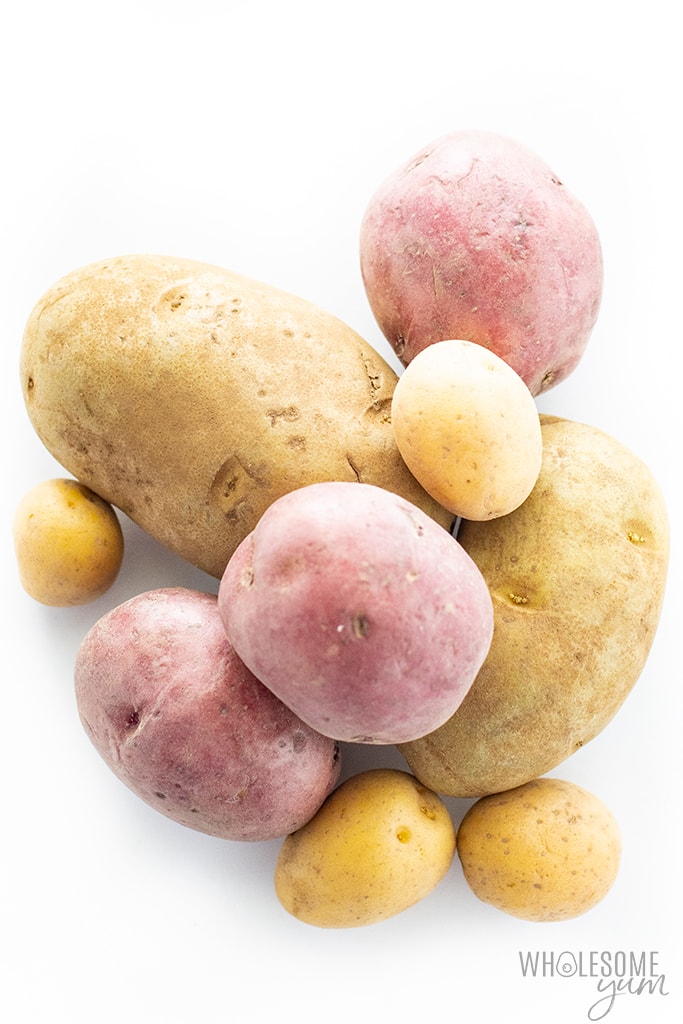 How many carbs in potatoes?

Are potatoes high in carbs? You bet — but the amount depends on the potato.

How many carbs in a potato?

A single medium russet potato has 35 grams of net carbs [*]— much too high for a traditional keto diet that aims for 20-30 net carbs per day.

What about carbs in baked potatoes?

A medium baked potato will have the same amount of carbs as a raw one – 35 grams of net carbs.

This does not include the carb count of any baked potato toppings you add, but those are typically negligible in comparison to the potato itself. That’s one of the reasons that other vegetables with toppings can sometimes act as a stand-in (like the baked potato alternatives below!).

How many carbs in red potatoes?

Red potatoes are slightly lower in calories and total carbs than white potatoes, even when you compare the same weight of 100g. But in addition, they are often smaller.

Are any potatoes low carb?

As you can see, the carbs in potatoes are very high, and pretty similar, no matter what kind you have.

So, if you’re wondering “can you eat potatoes on keto?“ the answer is a firm no. The carbs in potatoes are simply too high to enjoy on a traditional keto diet.

For strict carb counters, potato starch is not keto: it contains 10 grams net carbs in a 1-tablespoon serving.

However, the answer of whether potato starch is keto is more nuanced. Some evidence suggests that supplementing with potato starch can reduce insulin sensitivity[*] and feed “good” gut bacteria[*], especially if that starch has never been exposed to heat.

You may want to reconsider the net carb count in potato starch, too. Research shows that in its raw form, it’s a resistant starch and does not get digested like traditional carbohydrates [*]. So, it might not have the same impact as a traditional starch if used raw, but may be digested when cooked. The only way to know for sure whether potato starch is keto is to test it on yourself. 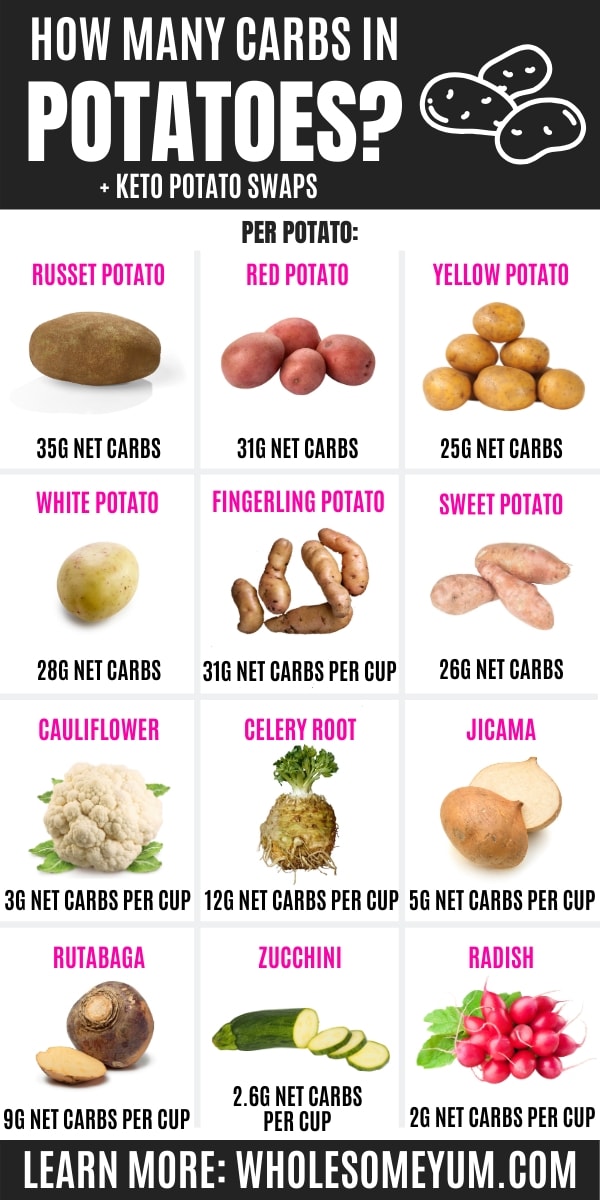 Carbs In Potatoes (and Alternatives)Pin It For Later!

If you’re craving potatoes, there’s a keto potato substitute for you. Depending on the recipe, these swaps might make you think you’re really eating potatoes on keto! 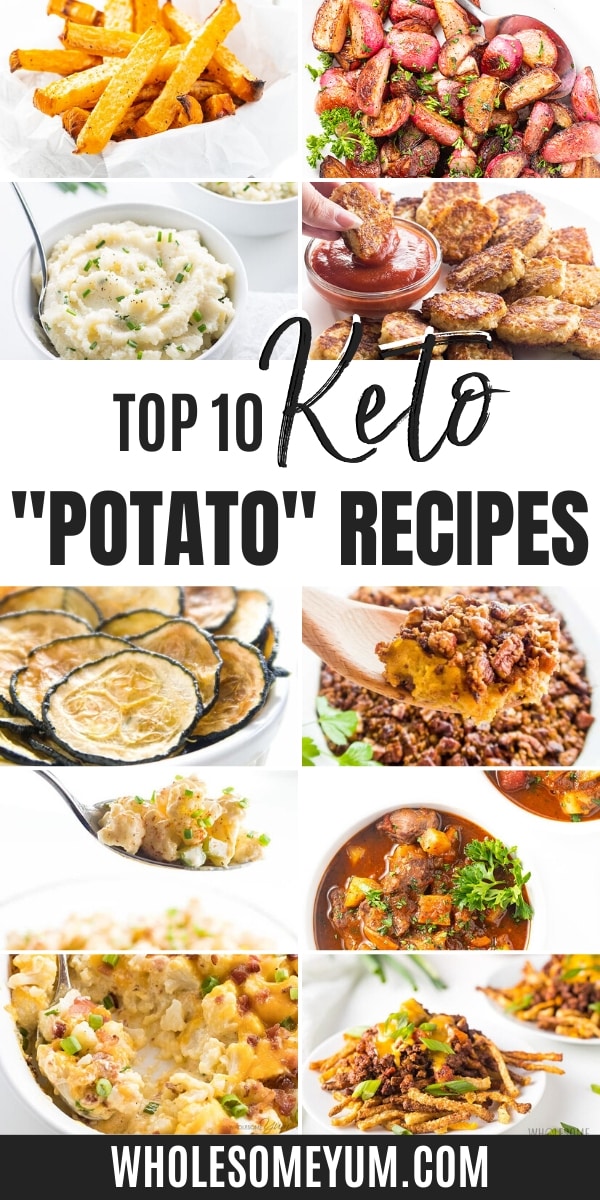 Recipes For Keto Potato SubstitutesPin It For Later!

You might have noticed that keto cauliflower recipes are the most common low carb potato replacement, and with good reason. When cooked, it has a soft texture and neutral taste, perfect for taking on flavors of things typically made with potatoes.

So, are potatoes keto friendly? Definitely not — but there’s a keto potato substitute for every taste if you know where to look. 😉 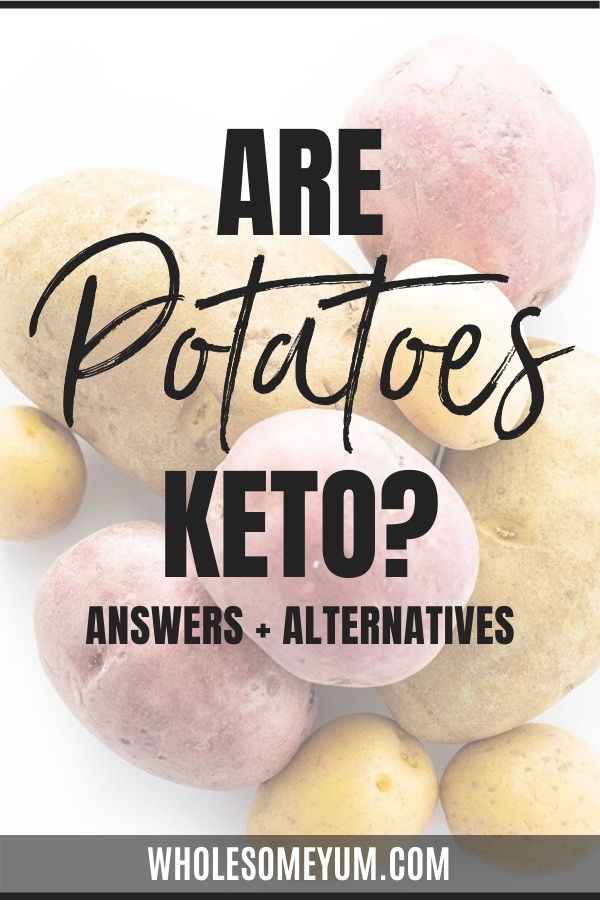