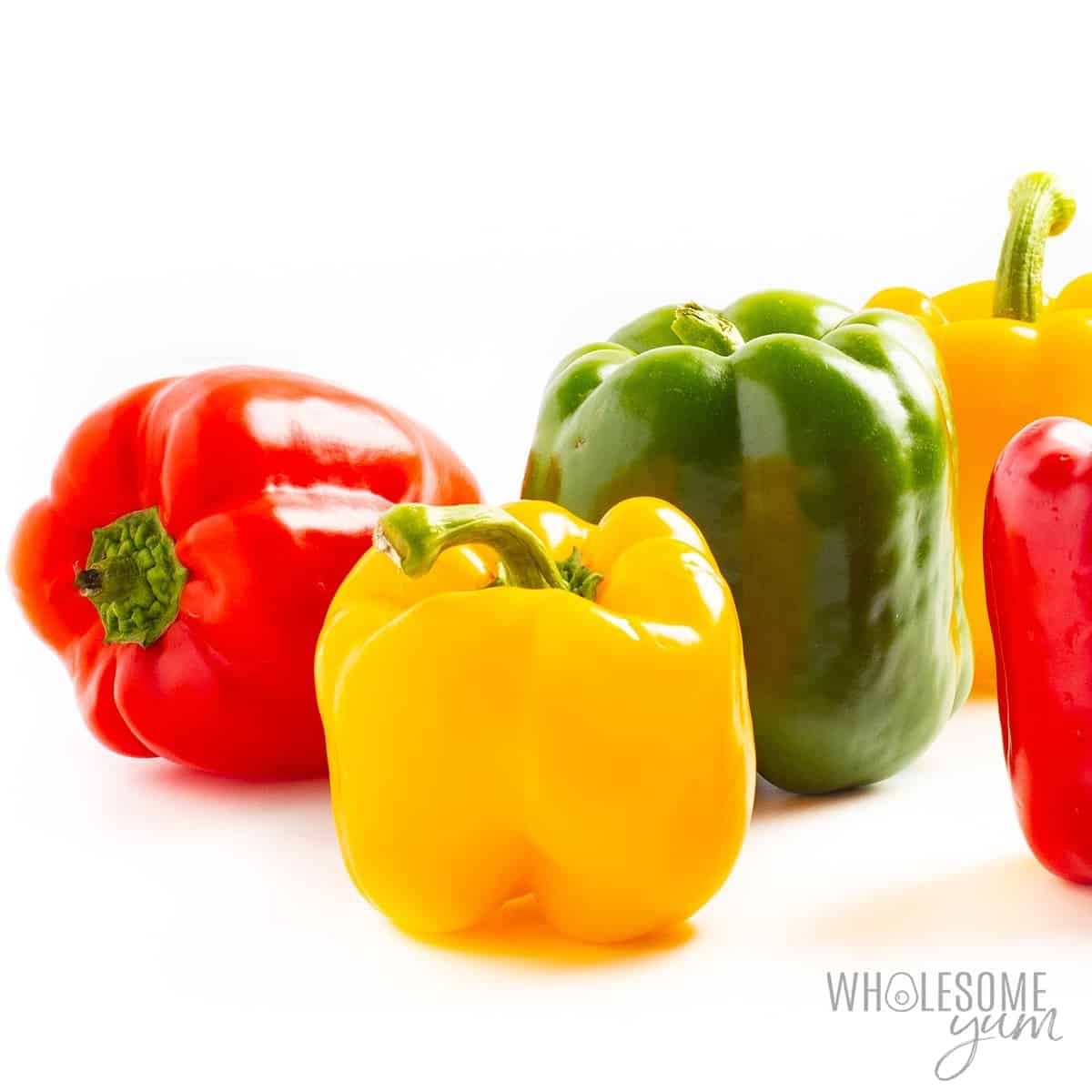 Sweet, crisp, crunchy… just like onions and asparagus, it’s easy to see why bell peppers can fit into most healthy diets. Are bell peppers keto, though? Let’s take a closer look at carbs in bell peppers and ways to enjoy the fresh taste of bell peppers on keto.

Bell peppers are totally keto friendly! Carbs in bell peppers are low enough to enjoy frequently, although the exact macros vary by the color you choose.

Mini bell peppers are keto friendly, too. With a smaller size, they contain fewer carbs per piece than full-size peppers.

How Many Carbs In Bell Peppers?

Carbs can vary widely depending on the color of bell pepper (see exact numbers below!), the size, and even when it was harvested. This is why you can see a wide range of carb counts depending on the source you look at.

According to the USDA, on average, a medium bell pepper contains 6.2 grams total carbs [*].

When it comes to net carbs in bell peppers, they clock in slightly lower. With a small amount of fiber, medium bell peppers contain 4 grams net carbs each.

How many carbs in green bell peppers?

How many carbs in red bell peppers?

How many carbs are in yellow bell peppers?

How many carbs do bell peppers have if they’re yellow? One large yellow bell pepper clocks in at 11.8 grams total carbs and 10.1 grams net carbs [*].

How many carbs are in mini bell peppers?

Mini bell peppers carbs are lower, since the serving size is a bit smaller. In an 85 gram serving (about 3 mini peppers), you’ll find 6 grams total carbs and 5 grams net carbs [*].

The chart below summarizes carb count for bell peppers of all kinds.

Keto Recipes With Bell Peppers:
Pin to save for later!

Now that you know that all of these peppers are keto bell peppers, try them in these fresh and flavorful dishes!

No time to prep individual peppers? Make this soup instead — it has all the flavor of stuffed peppers in one bowl.

Get The Stuffed Pepper Soup Recipe

Bell peppers are a must in any fajita recipe! Learn how to make them in 20 minutes and keep carbs low.

Get The Chicken Fajitas Recipe

Can you have bell peppers on keto in a jambalaya recipe? You can with this one! A simple rice swap cuts the carbs but keeps all the flavor.

Get The Keto Jambalaya Recipe

Even if you don’t do Whole30, you’ll love this chili! With lots of meaty flavor and chopped veggies, you won’t miss the beans or cheese.

Get The Whole30 Chili Recipe

This salad doesn’t skimp on crunch factor, thanks to fresh bell peppers, cucumbers, and onion — all with a simple citrusy dressing.

Get The Israeli Salad Recipe

Savory sausage and sweet peppers make the perfect pairing! Best of all, the slow cooker does all the work to make them perfectly tender.

Get The Sausage And Peppers Recipe

Low carbs in sweet peppers and other crunchy veggies make this wrap a super fresh sandwich swap! Don’t miss the hummus swap in this recipe, too.

Get The Collard Green Wraps Recipe

Get The Philly Cheesesteak Casserole Recipe

With so many colors to choose from, bell peppers make the perfect addition to this technicolor dish — complete with fruity dressing!

Get The Rainbow Salad Recipe

Are bell peppers high in carbs for Mexican-style dishes? Not this one! Layers of bell peppers, keto rice, and spiced beef make this a filling meal for all to love.

This satisfying stew gets tons of zesty flavor from bell peppers, a homemade spice blend, and a mix of tender sausage and shrimp.

Get The Keto Gumbo Recipe

Conclusion: Can You Eat Bell Peppers On Keto?

Yes, you can eat bell peppers on keto! Carbs in bell peppers are low enough to enjoy frequently, but pay attention to the color and size if you’re counting carbs closely.