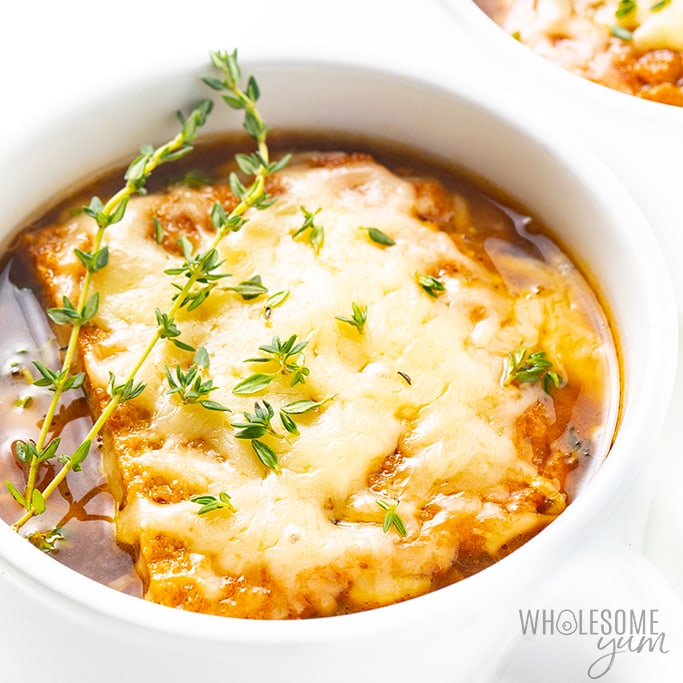 This keto French onion soup tastes just as rich and flavorful as the real deal, without all the carbs! Instead of using regular bread to top it, we’re using my keto 90-second bread! Keto onion soup (aka healthy French onion soup) is made with just 9 basic ingredients, with caramelized onions as the star, that come together in a luxurious way. It’s perfect for entertaining, as this low carb French onion soup can be made ahead and assembled and broiled right before serving. It’s sure to impress.

If you love caramelized onions as much as I do, you’ll want to try my recipes for smothered pork chops and caramelized French onion dip. 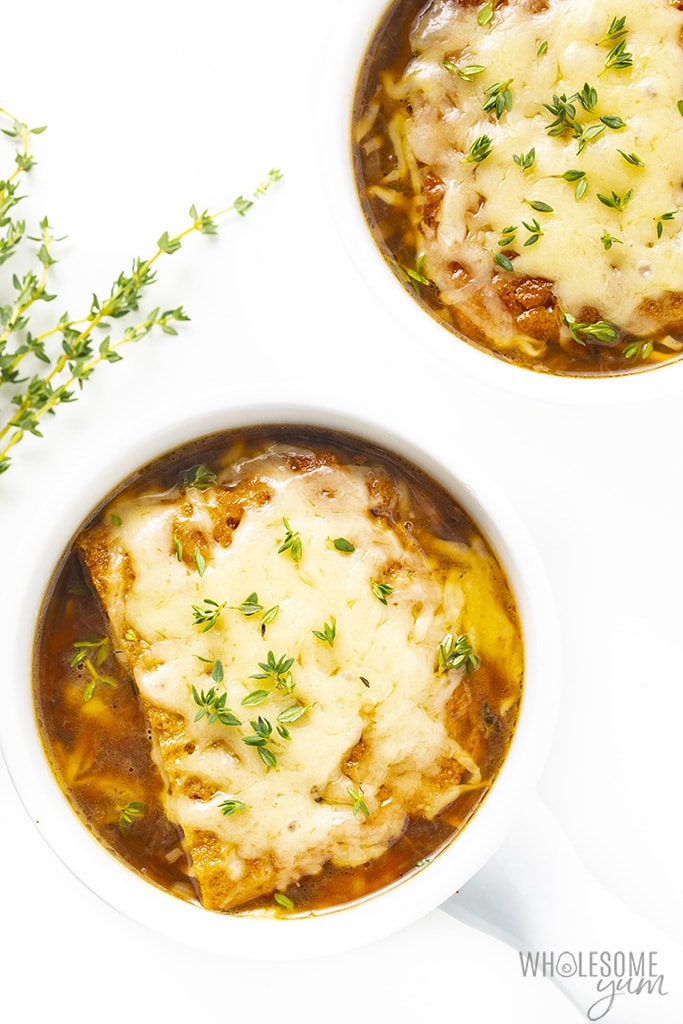 The ingredients in keto onion soup are very basic, but come together in an impressive way: 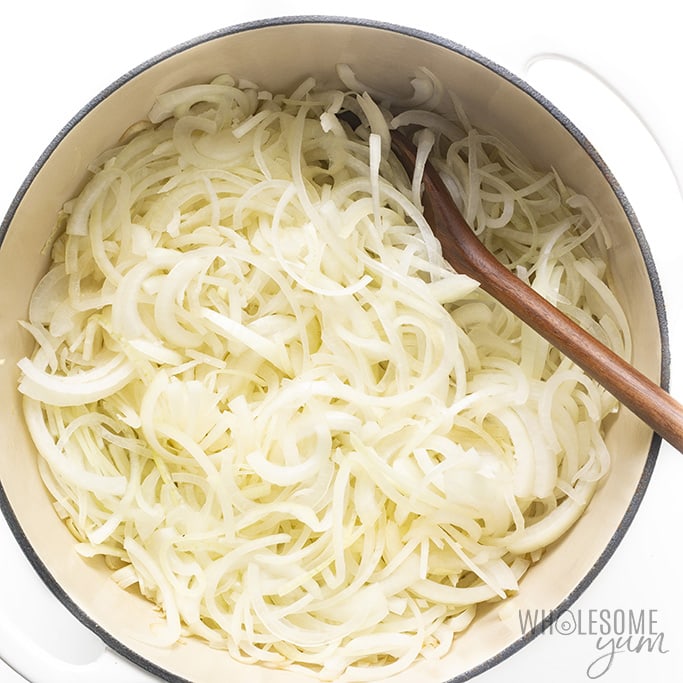 … And keep sauteing them until they are nice and caramelized…

TIP: Get my complete guide to perfect caramelized onions here! 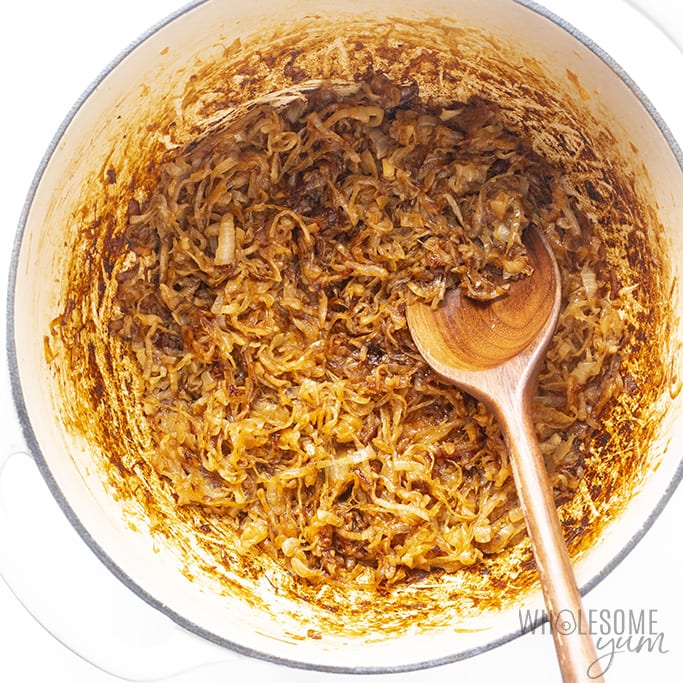 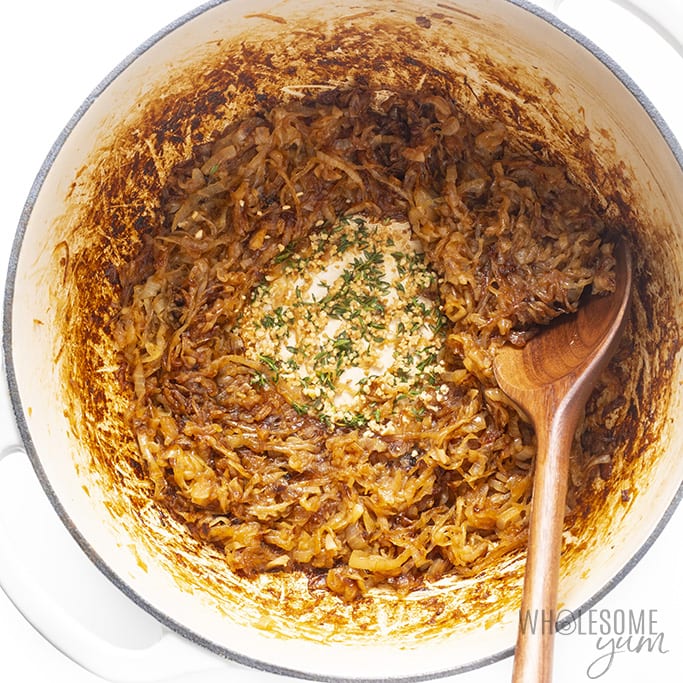 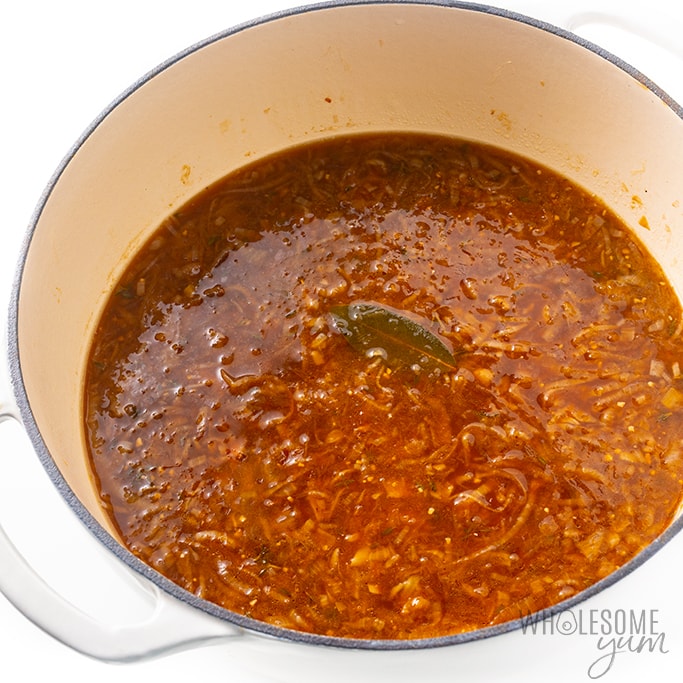 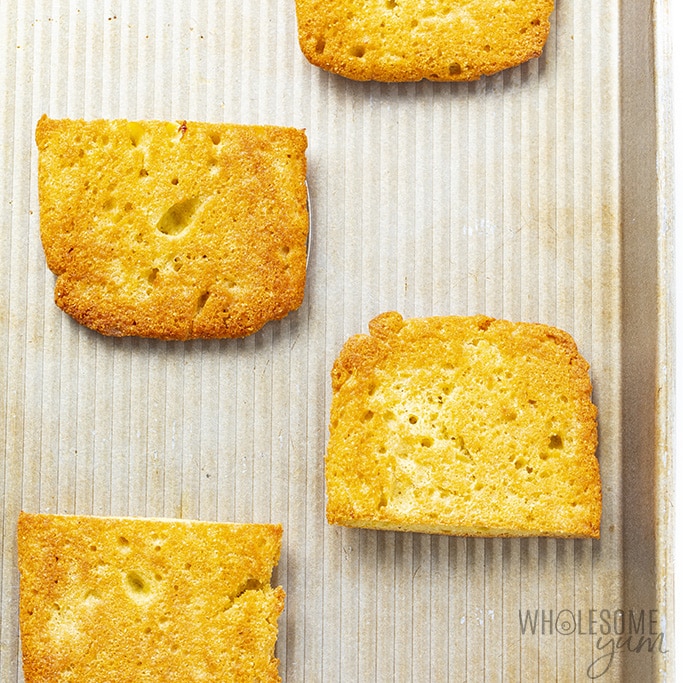 French onion soup tastes meaty from the beef bone broth, sweet from the caramelized onions, and comforting from the bread and cheese on top… all in one.

Regular French onion soup is high in carbs and far from keto friendly. It’s made with regular bread, which adds a lot of carbs, and sometimes the broth even includes a flour roux as a thickener, which I think is totally unnecessary. Besides, onions are relatively high in carbs, too.

Fortunately, this low carb French onion soup is a much better alternative for a keto diet.

Still, because onions are relatively high in carbs compared to other vegetables, you also need to be mindful of serving size. Due to the onions, there are 12.3 grams net carbs per cup of this healthy French onion soup recipe – which is actually very filling and complete with cheesy topping.

This carb count can be keto-friendly for many people following keto, but it does vary depending on your macros and for some may be too high.

TIP: Need to lower the carbs more? Reduce the onions from 2.5 pounds to 2 pounds, which will shave off about 2 grams per serving.

Why did my onions burn or not caramelize?

Caramelized onions are the key to great French onion soup – don’t rush them! If they are burning, not caramelizing, or you’re having some other issue with that step, please read the detailed guide on how to make caramelized onions here.

Does it matter what kind of onions are used?

I used yellow onions, but feel free to use others if you like. Some people even like to mix up different kinds.

From a keto standpoint, any carb differences between varieties are only slight. 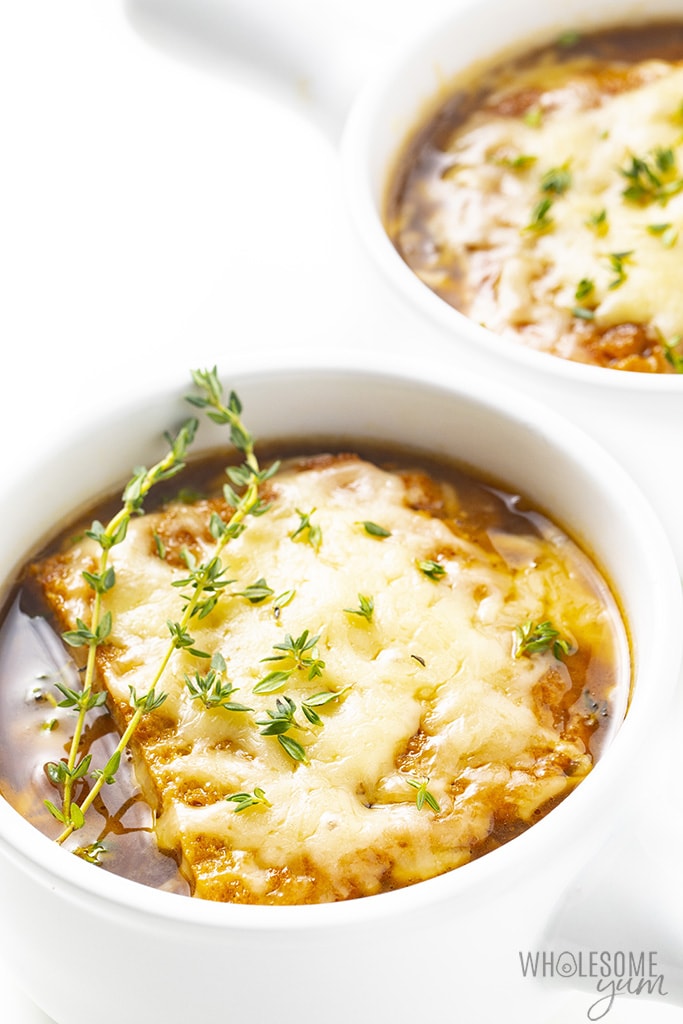 Can you make it ahead?

You can definitely prep this soup ahead! Caramelizing onions takes about 20 minutes, so make the soup ahead and prep the 90-second keto bread and gruyere cheese.

You’ll just need to assemble and broil everything right before serving.

Store the soup and toppings separately in the refrigerator for 3-4 days. (Don’t store with the bread on top – it will get soggy.)

Can French onion soup be frozen?

Yes, you can also freeze the soup to enjoy later. Obviously you’ll want to freeze the soup, bread, and cheese separately but they can all be frozen individually for 2-3 months and then reheated.

Can French onion soup be reheated?

Reheat the soup in a dutch oven on the stovetop, or in the microwave if you like, until hot. Then, proceed to top with toasted bread and cheese, and broil, just as you would fresh. 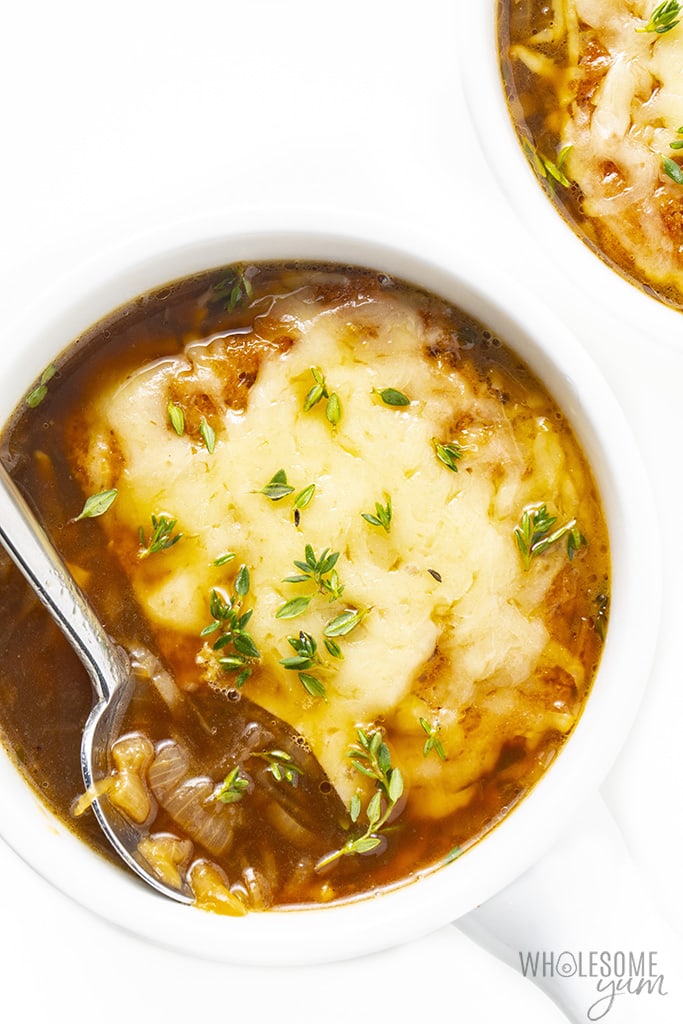 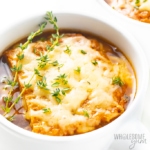 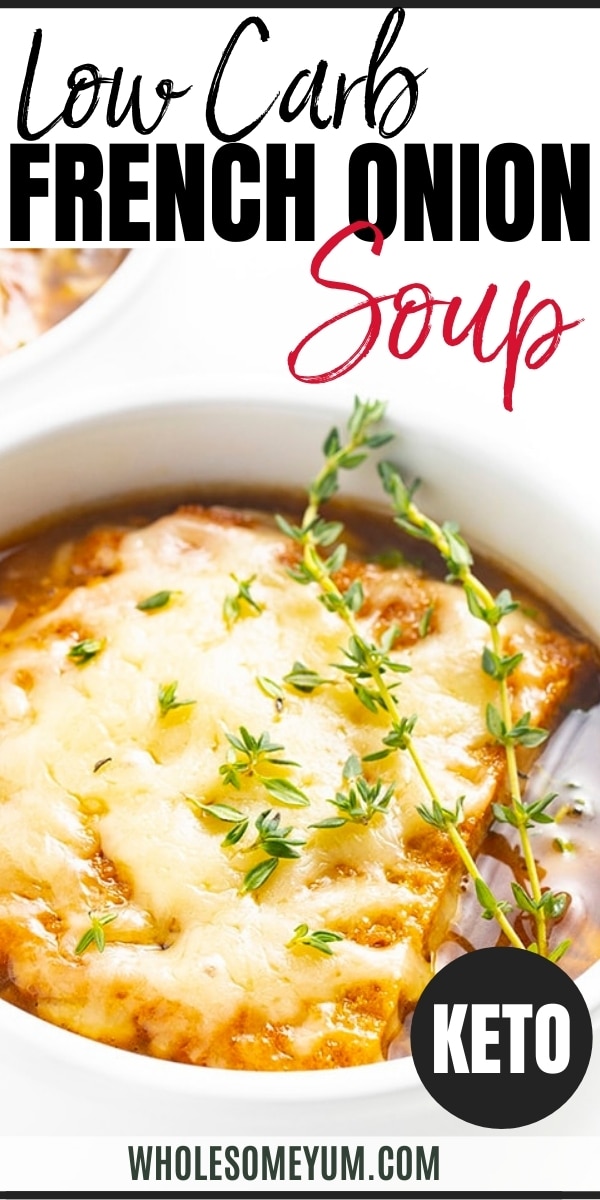