GET THE EASY KETO APP BY WHOLESOME YUM

GET THE KETO APP
SAVE153 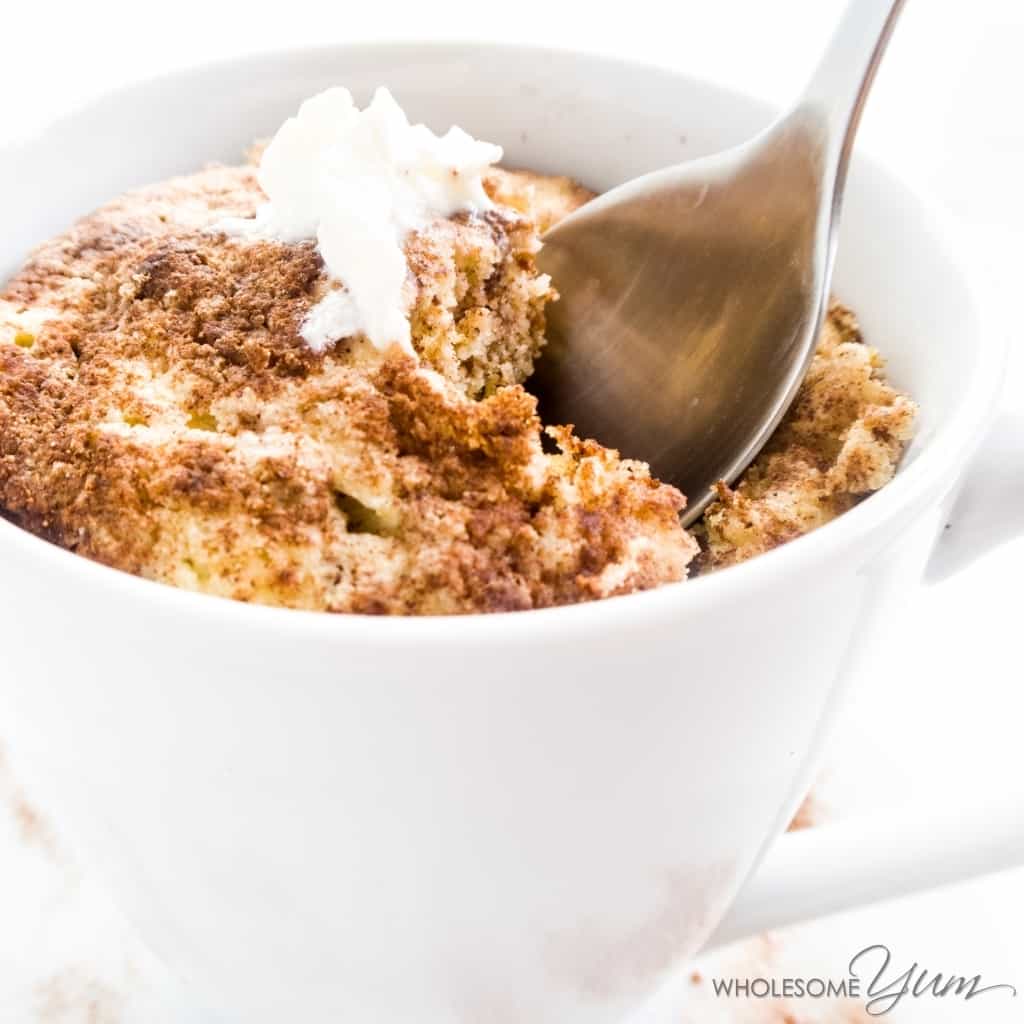 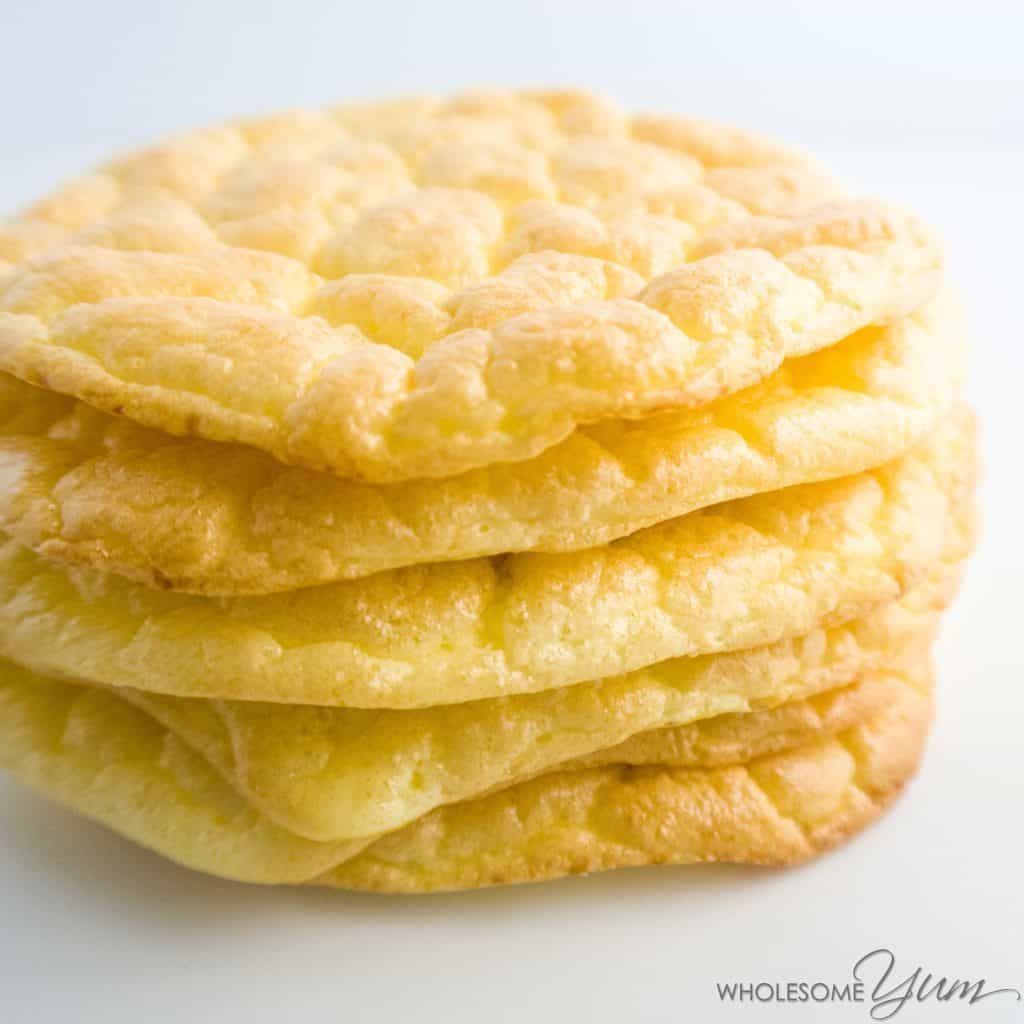 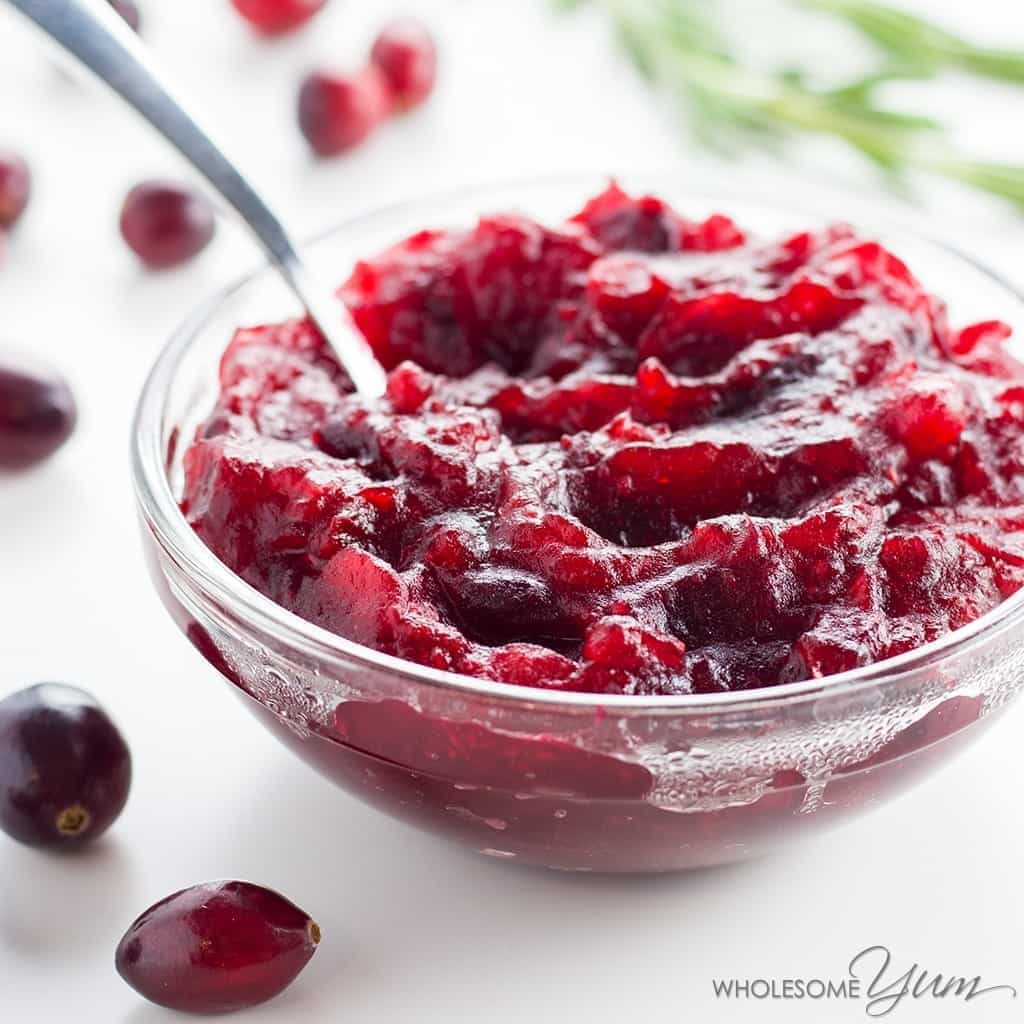 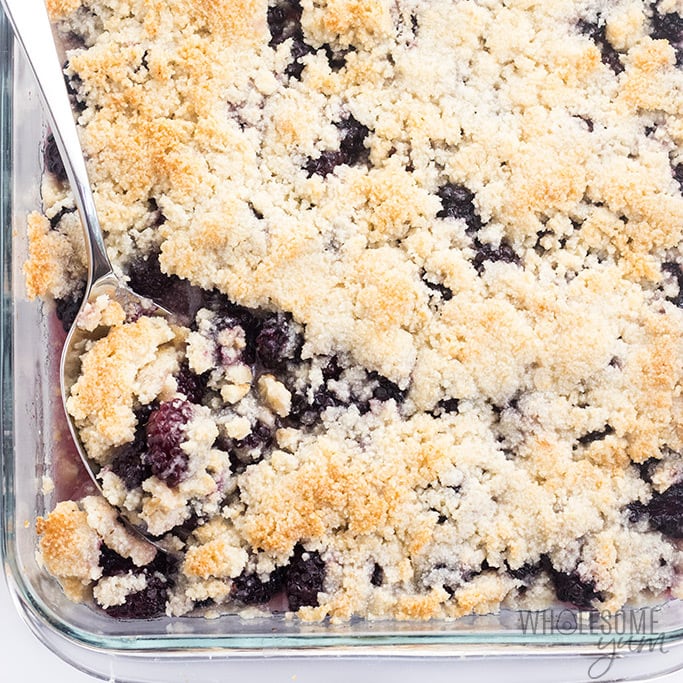 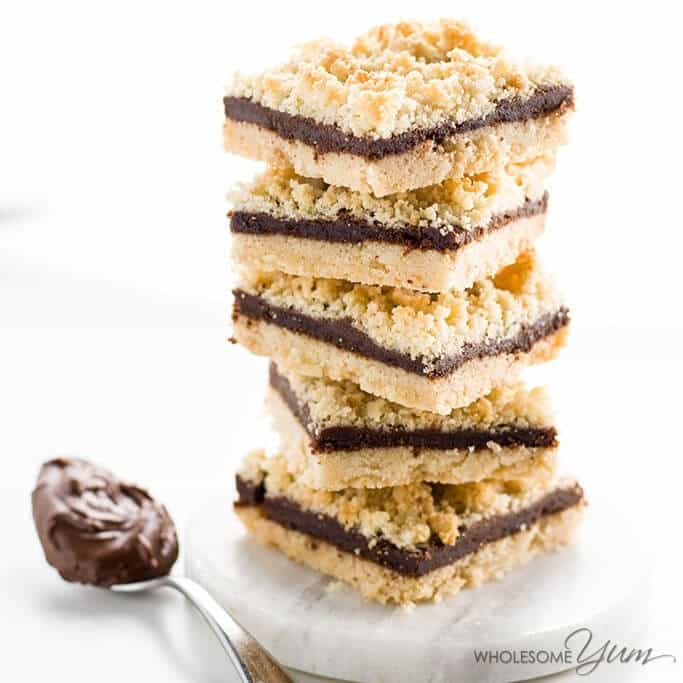 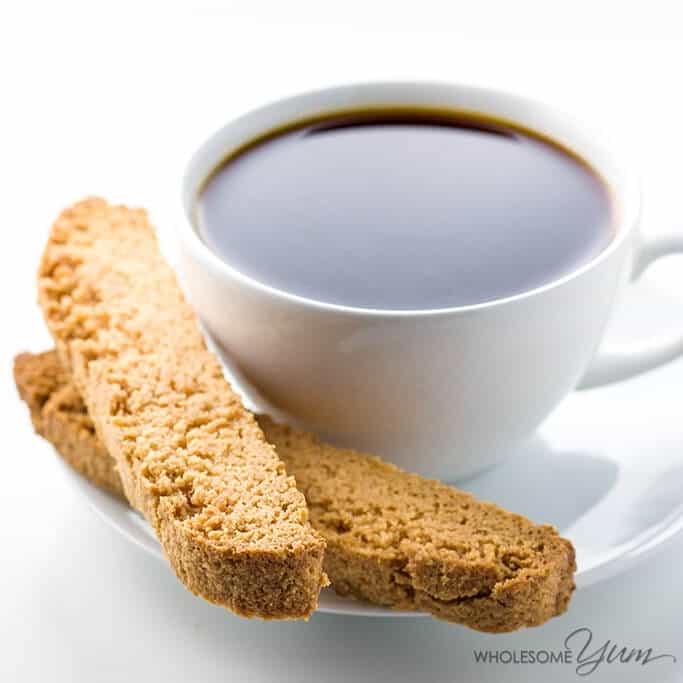 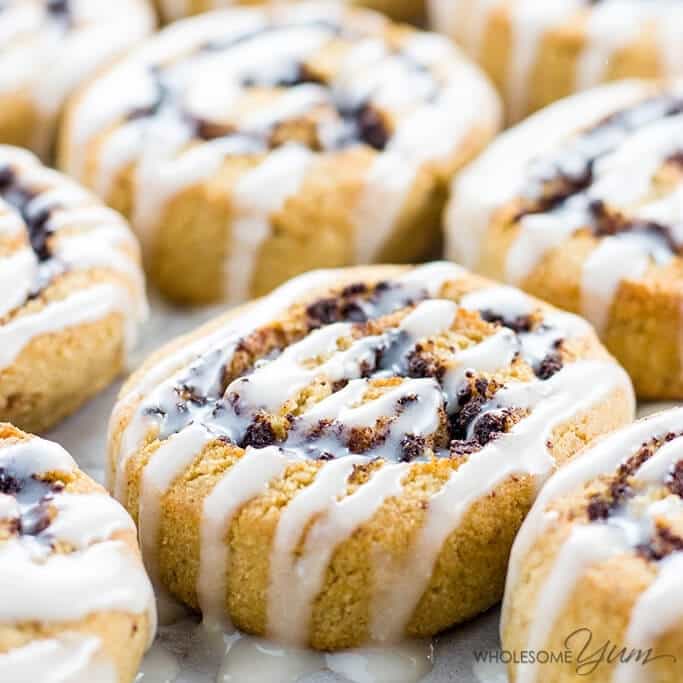 Join 170,000 others to get a FREE keto food list, plus weekly keto recipes!

Table Of Contentsclick to show

You know what I’ve been missing lately? Cinnamon rolls. Even though the weather has been insanely warm this week (60 degrees in February – what?!), I still love to warm up in the mornings with a steaming cup of coffee. There are a million and one things that go well to accompany it, but all month long I’ve been dreaming of having it with a great big cinnamon roll. This healthy cinnamon rolls recipe was just what I needed.

The challenge with creating gluten-free, low carb cinnamon rolls is that the texture doesn’t lend itself well to typical low carb flours. Without the gluten found in traditional wheat flour, a dough made with almond flour and coconut flour simply doesn’t hold together well enough to be rolled up. I knew I’d have to experiment with some kind of binder. 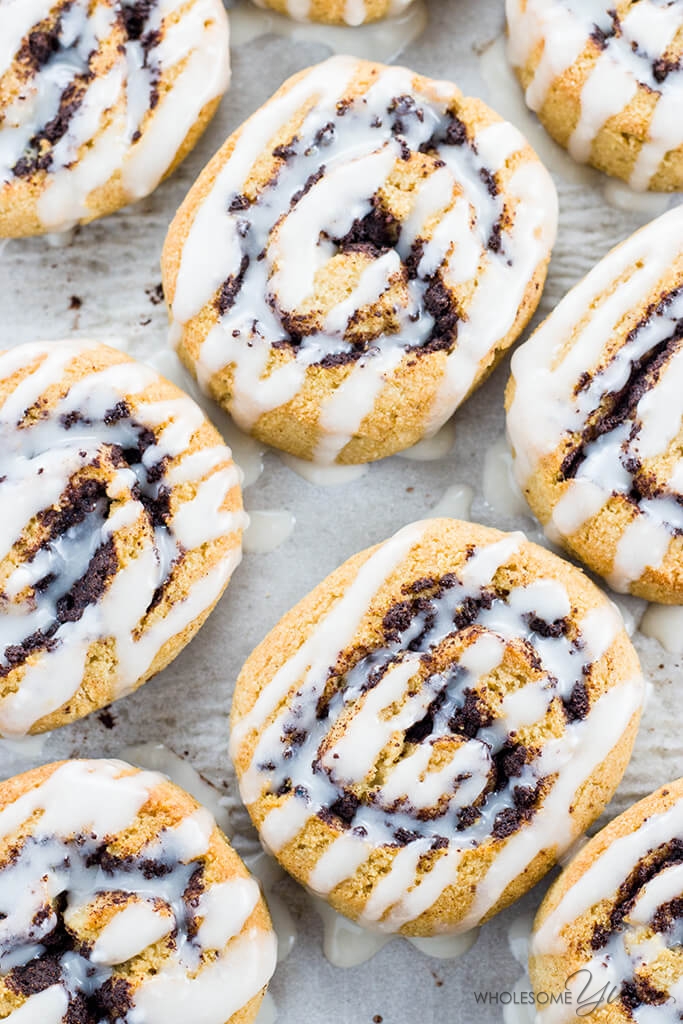 After debating whether I was going to use psyllium husk powder, gelatin, protein powder, or mozzarella cheese, I settled on the first option. Psyllium is a soluble fiber that comes from plantago ovata, an herb plant, and the powder is the husks in ground up form. Like other soluble fiber, psyllium is beneficial to the digestive system. Having heard that it works exceptionally well as a binder, I have been wanting to experiment with it.

Needless to say, it took several tries for psyllium husk powder to work the way I wanted in my healthy cinnamon rolls. I had attempts that had too much psyllium, resulting in a strange texture. When I tried reducing the amount too much, my rolls fell apart. Mixing the powder with water prior to adding other ingredients made the dough difficult to mix, so that method was out, too.

Between my experiments, I stumbled across a psyllium cinnamon rolls recipe from Keto Adapted. It looked amazing, but I wanted my own version for more tender rolls and a less chewy texture. With that inspiration, I landed on this final recipe for healthy cinnamon rolls. 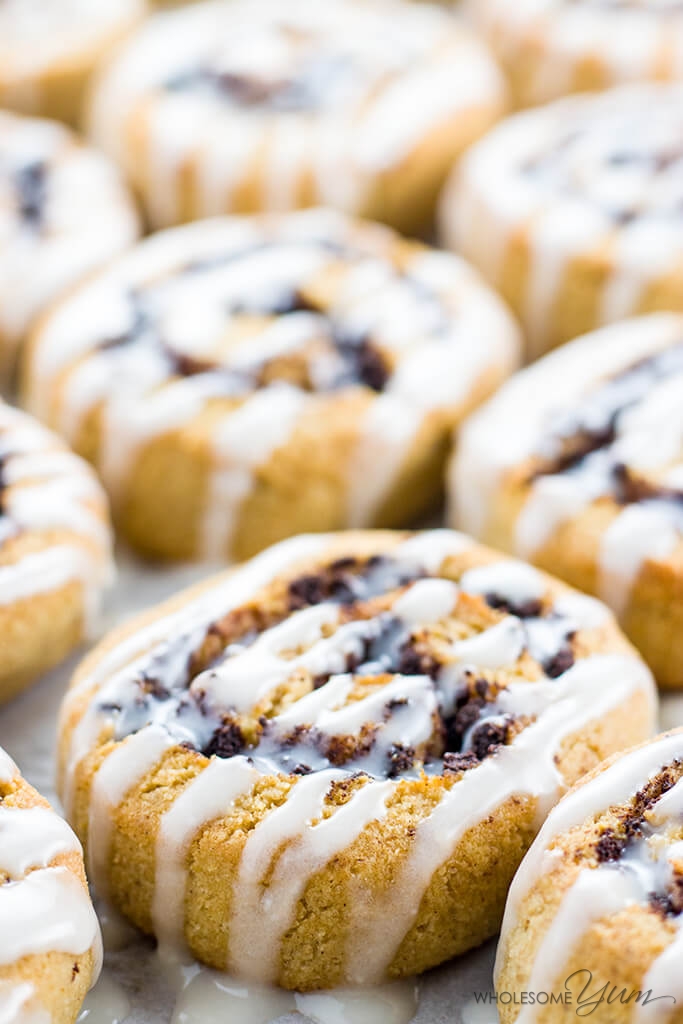 These low carb cinnamon rolls do have a more cake- or muffin-like texture than wheat rolls. I brought them to a few gatherings and felt the need to add a disclaimer that they’d be a little different from traditional cinnamon rolls. Still, they’re sweet and cinnamon-y, and have a yummy glaze.

I made the glaze with coconut oil and coconut cream, to also be able to call them paleo cinnamon rolls, but you don’t have to. Any version of a glaze that you like would be amazing. Cream cheese frosting tends to go really well, too, if you don’t mind the dairy.

In the end, I was pretty happy with my healthy cinnamon rolls adaptation. The flavor is exactly what you’d expect from a cinnamon roll! And, they stay together well enough to eat with your hands. That’s pretty amazing when it comes to gluten-free cinnamon rolls. Even better, I can enjoy them as a treat with the knowledge that I’m eating natural ingredients with no sugar. Will you give them a try?

Sugar-free Healthy Cinnamon Rolls Recipe:
Pin it to save for later!

The recipe card is below! Readers also made these similar recipes after making this one. 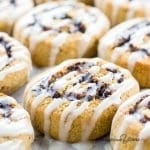 Click underlined ingredients to see where to get them.
Please ensure Safari reader mode is OFF to view ingredients.

Get RECIPE TIPS in the post above, nutrition info + recipe notes below!

Readers Also Made These Similar Recipes

Made this? Leave a rating!

Where does nutrition info come from? Nutrition facts are provided as a courtesy, sourced from the USDA Food Database. You can find individual ingredient carb counts we use in the Low Carb & Keto Food List. Net carb count excludes fiber, erythritol, and allulose, because these do not affect blood sugar in most people. (Learn about net carbs here.) We try to be accurate, but feel free to make your own calculations.

If you want to know more about how to start a low carb diet, want to substitute sweeteners, need a food list, or need support, check these guides:

Use the buttons below to buy my new Besti sweeteners and Wholesome Yum keto ingredients, developed by me personally!