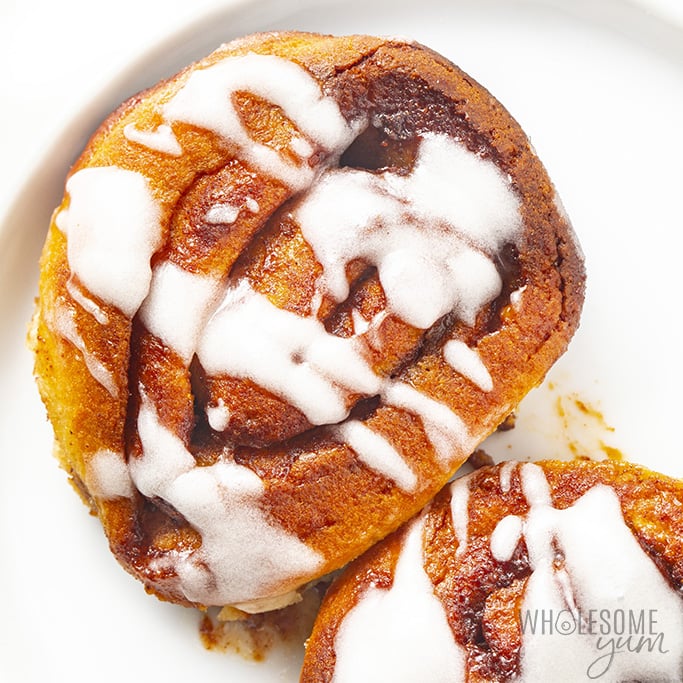 Easy keto cinnamon rolls (aka fathead cinnamon rolls) might just be one of the greatest low carb keto breakfasts of all time. Unlike fathead bagels and fathead pizza (which are totally delicious in their own right), this recipe puts a sweet spin on this classic dough. It’s fluffy and aromatic with a layers of the best keto brown “sugar”, cinnamon, melted butter… and of course, a drizzle of icing at the end. You would never be able to guess that these low carb cinnamon rolls have just 2.6 grams net carbs. It’s a healthy treat that everyone loves!

You might know already that fathead dough and I are kind of BFF’s. And clearly we’re not exclusive, because your most visited recipes on the blog happen to be fathead recipes like keto dinner rolls and crackers.

I’ve actually had a version of these keto cinnamon rolls on the blog for a couple years now, using ground macadamia nuts for the dough. But, I kept being asked over and over, how to make keto cinnamon rolls with almond flour? When I developed my Besti Brown Sweetener, low carb cinnamon rolls were the perfect candidate to put on the packaging – you’ll find the recipe on the back of the bag.

So, I incorporated this keto brown sugar into the cinnamon filling and re-worked the recipe to use almond flour. (Don’t worry, if you want to use macadamias like the old recipe did, you still can – see the FAQs below.) 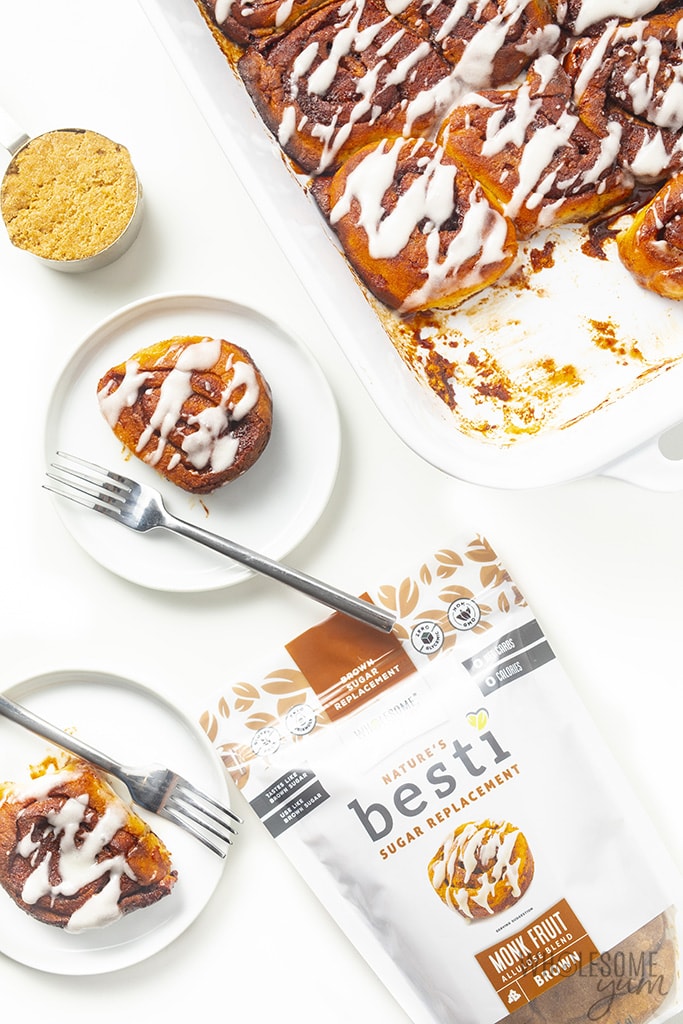 The process for how to make keto cinnamon rolls is similar to fathead bagels and fathead pizza. So, be sure to check those recipes for tips on working with the fathead dough. If you really want to master it and make half a dozen chewy baked goods in the process, I have a comprehensive guide on fathead dough in my Easy Keto Cookbook.

If you don’t have 40 minutes and are looking for a super quick breakfast recipe, you’ll love these keto pancakes. And if you’re craving more warm cinnamon flavors, try my cinnamon flax mug muffin or keto graham crackers.

This keto cinnamon rolls recipe was originally published on May 9 2018, and the post was republished in October 2020 to add updated pictures, useful tips, and some improvements to fathead dough cinnamon rolls, like switching to almond flour and including my Besti Brown Monk Fruit Allulose Blend. Here is one of the original photos, if you’re curious: 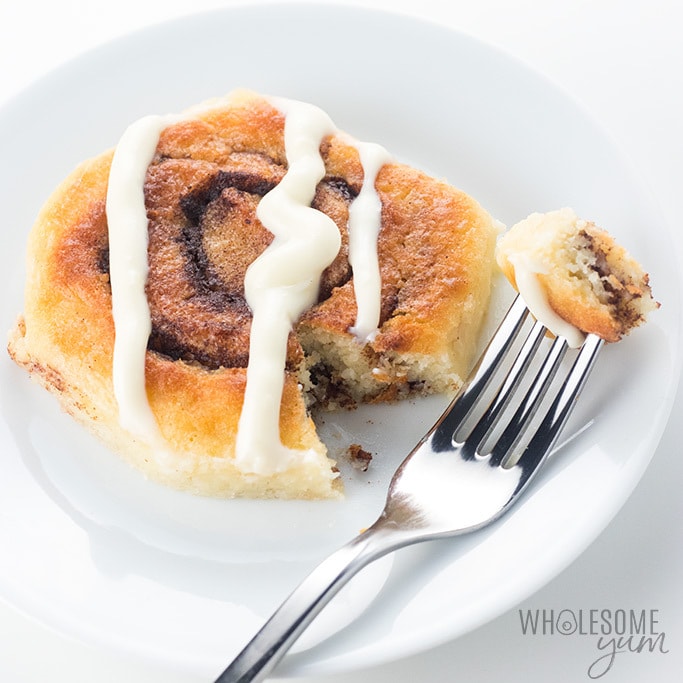 How To Make Keto Cinnamon Rolls

Fathead cinnamon rolls take a little time, but they are so worth the wait! 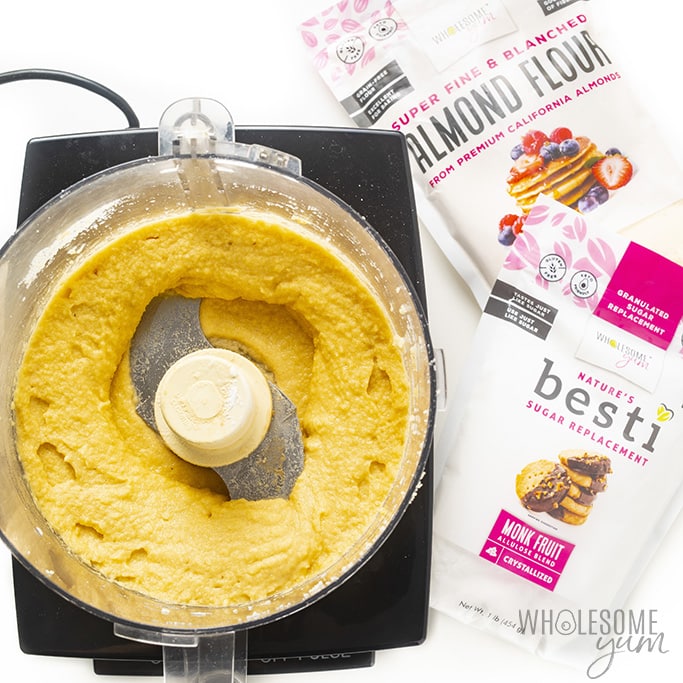 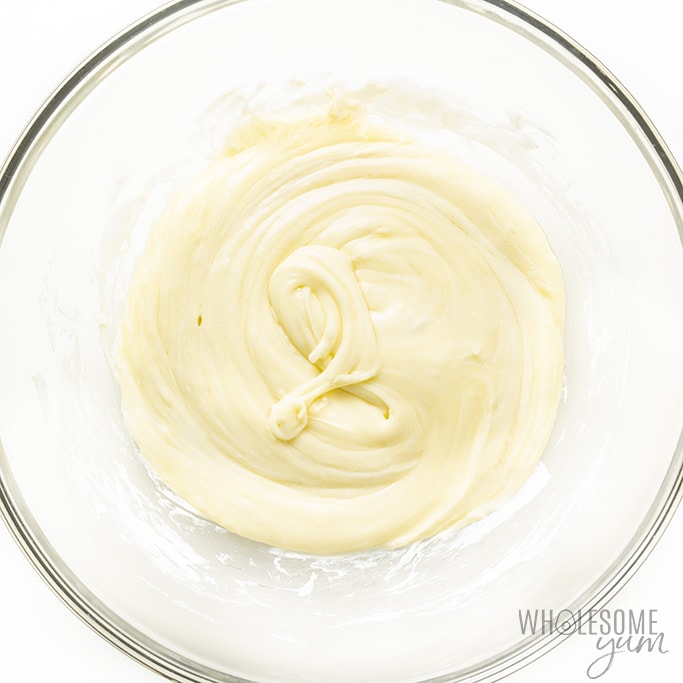 FYI: The dough will be sticky and a little rough – this is normal. 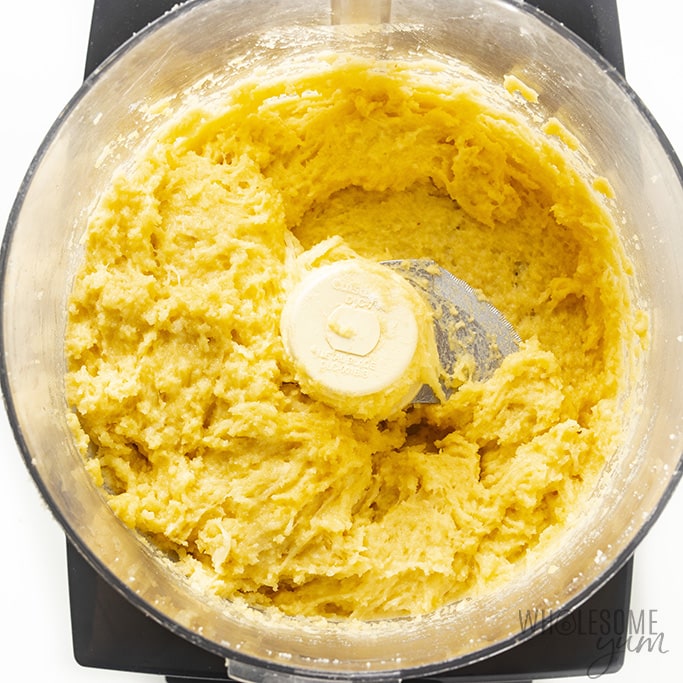 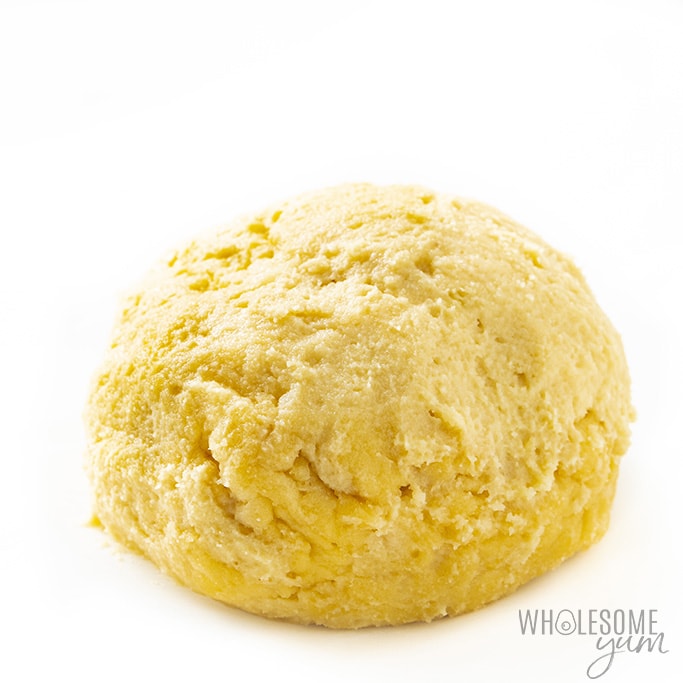 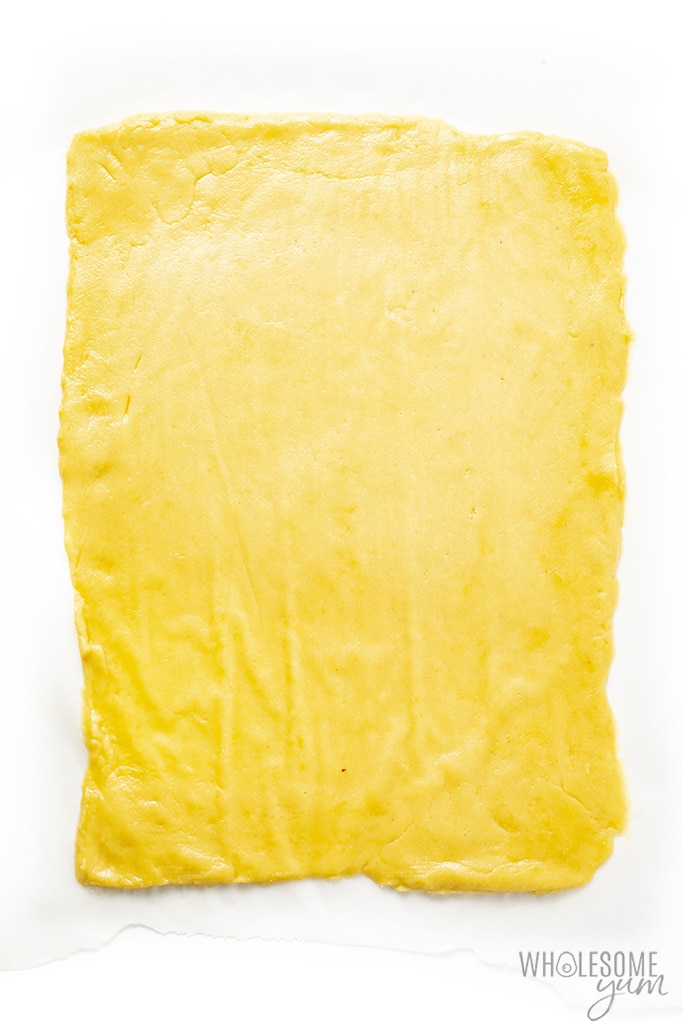 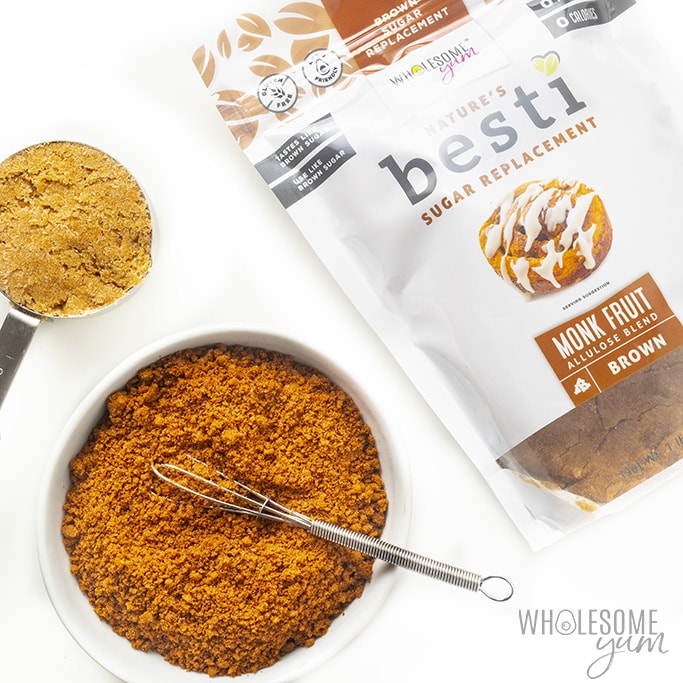 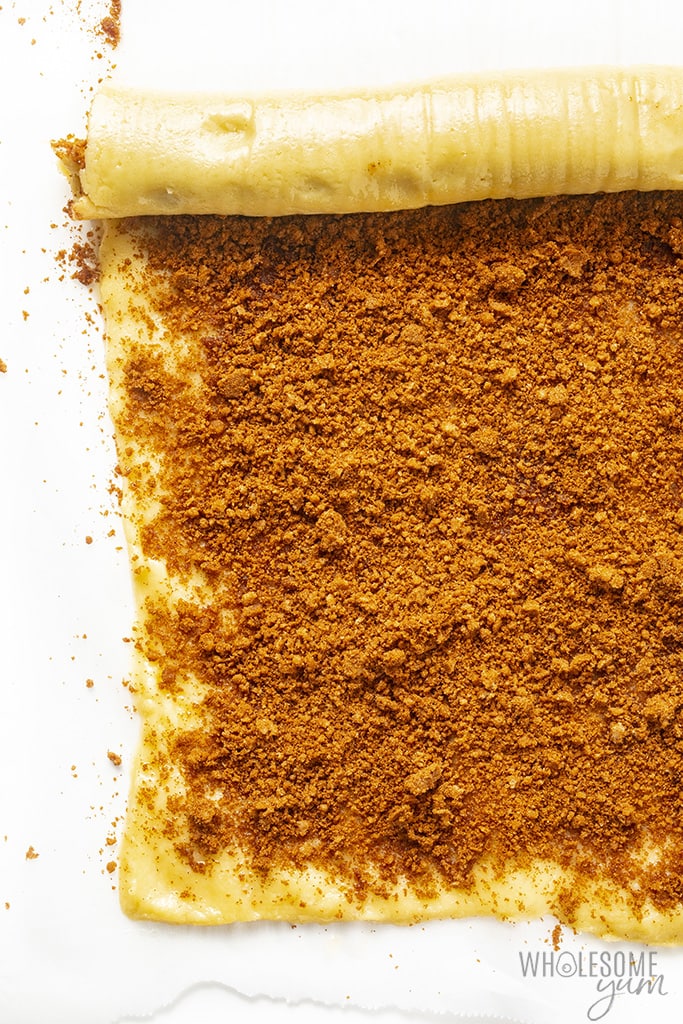 TIP: Pay attention to the spacing here! Fathead cinnamon rolls will expand and rise during baking. Putting them too close together won’t give them room to expand, but too far apart and they will spread instead of rising. 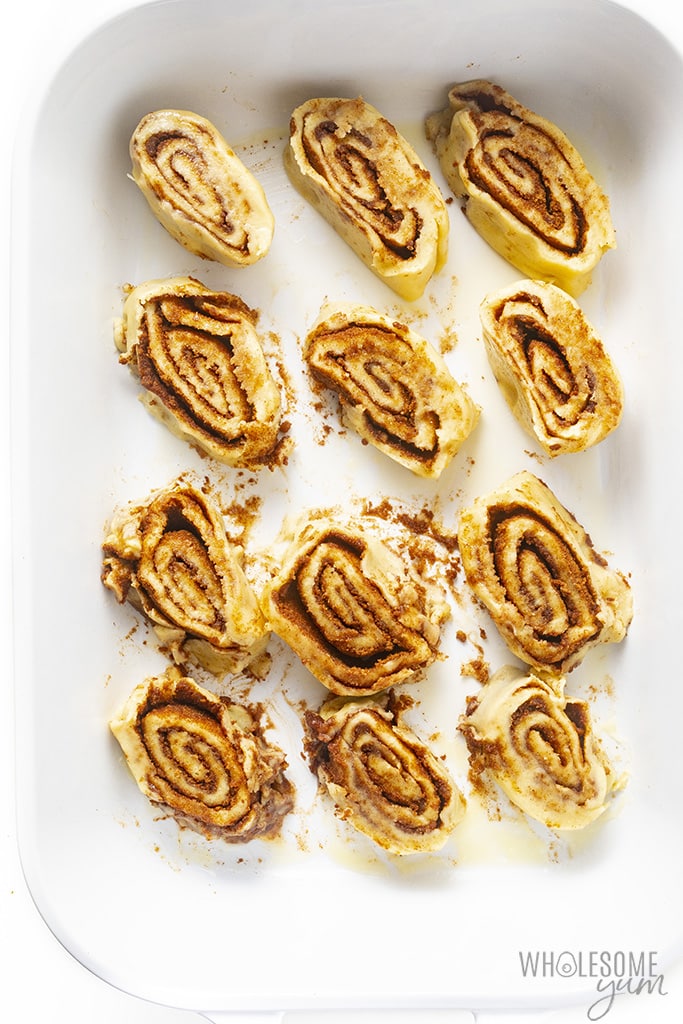 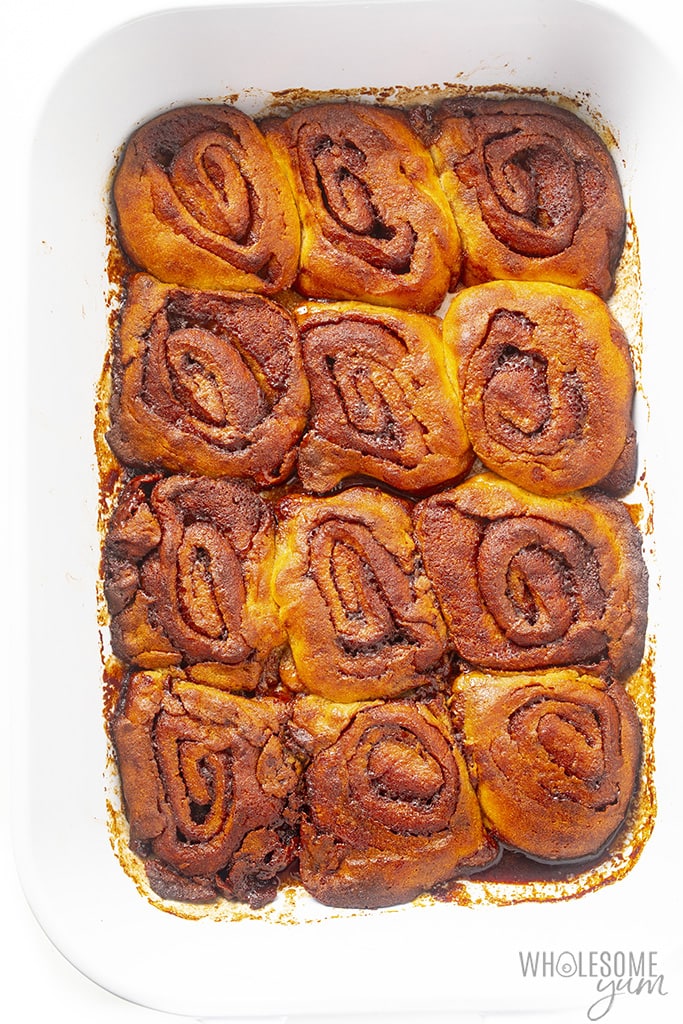 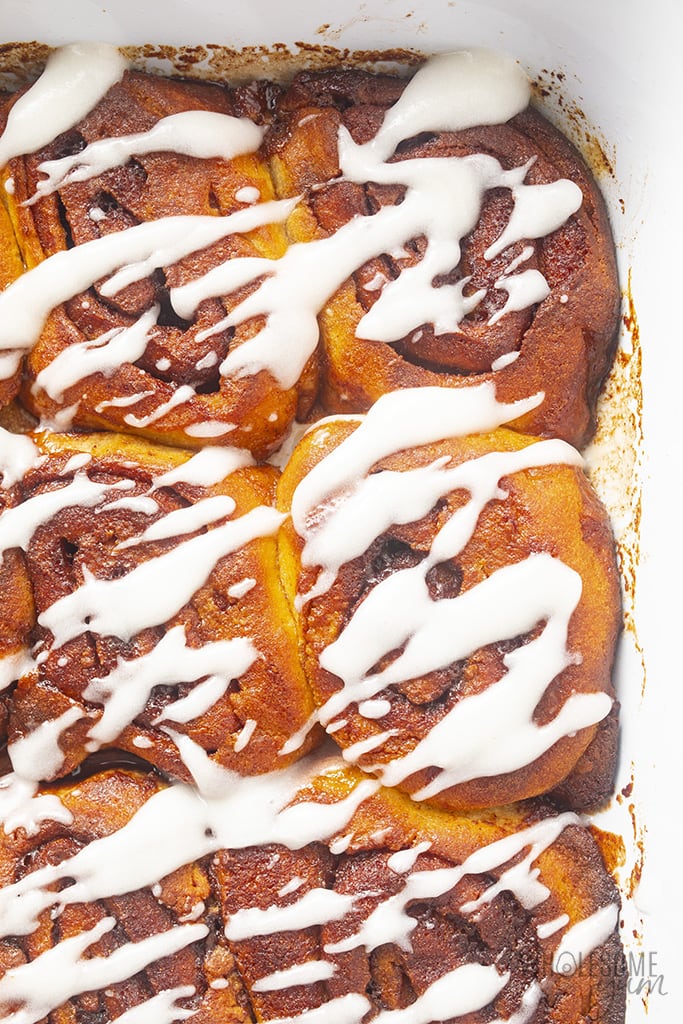 Regular cinnamon rolls are definitely not keto friendly. They are loaded with flour and sugar.

Fortunately, these sugar free low carb cinnamon rolls are keto! Each roll with icing has just 2.6 grams net carbs, compared to a typical frosted cinnamon roll that can contain up to 73 net carbs or more.

You would never guess they are that low in carbs because they taste SO good!

Can you make these with coconut flour?

There are several ways to make fathead dough, most commonly with either almond flour or coconut flour. The almond flour cinnamon rolls version is below, but if you want to use coconut flour, just use the dough ratio in my fathead pizza recipe and double it.

How do I use macadamia nuts like the original recipe?

As mentioned before, I originally made this recipe using ground macadamia nuts (have you tried my chocolate keto fat bombs with them?) to form the dough, avoiding any kind of flour altogether.

But because most of you have almond flour on hand, and because macadamia nuts can be price-y, I updated the recipe to use a super fine almond flour instead.

If you would like to use macadamia nuts, you just need to pulse them in a food processor until they reach a fine flour consistency. You’ll need the same amount by volume as the almond flour before – 1 1/2 cups ground macadamia nuts, measured after they are finely ground. You can start with 2 cups of nuts and see if you need more after grinding.

The macadamias do increase the fat content and reduce the carbs, compared to using almond or coconut flour. That’s a great thing for keto cinnamon rolls!

Can you make these with a different sweetener?

These are the sweeteners I recommend for the best keto cinnamon rolls, and the reasons:

All of these work together to caramelize and make a rich flavor like real cinnamon rolls, without any odd aftertaste or sugar alcohols. If you would rather use other types, check out my keto sweetener guide, which has a conversion calculator, but just know the results may not be the same. 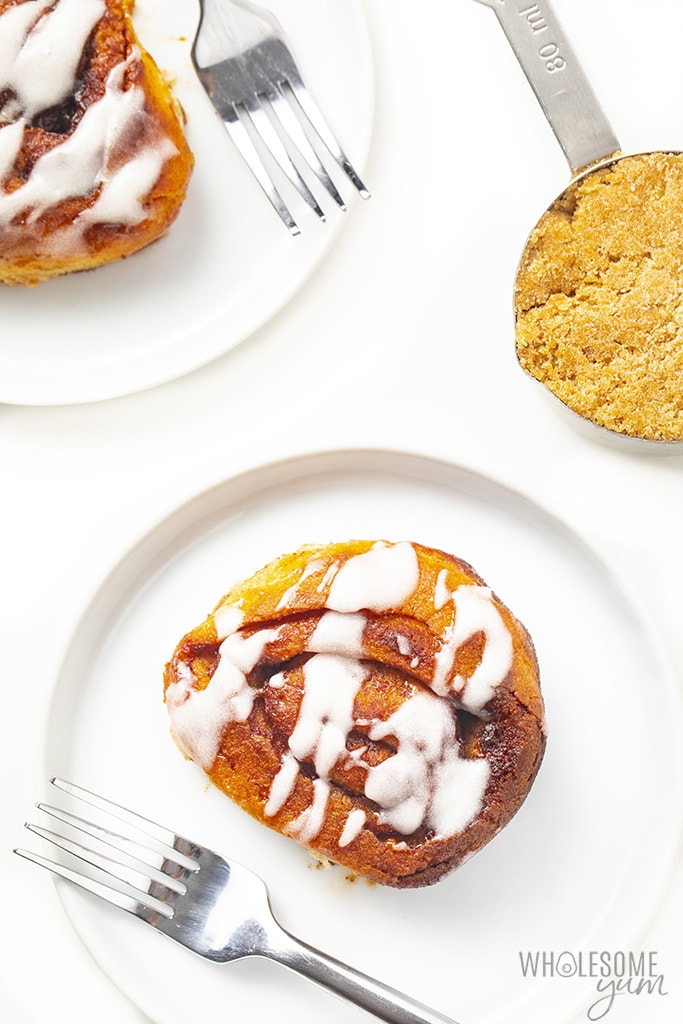 Can you make them ahead?

You can make these cinnamon rolls ahead, but I would recommend baking them right before serving. You can prep the keto cinnamon rolls fathead dough and even assemble the rolls. Store in the refrigerator until you bake.

How to store keto cinnamon buns:

Store these in the pantry for 2-3 days, or in the fridge for up to a week.

Can you freeze these?

Yes, you can also freeze these keto friendly cinnamon rolls for 2-3 months. To make things easy, wrap the rolls individually and then you can take them out of the freezer one at a time to thaw.

How to reheat keto cinnamon rolls:

The fastest way is to reheat them gently in the microwave, but you can also reheat them in a 325 degree F oven, until warm. 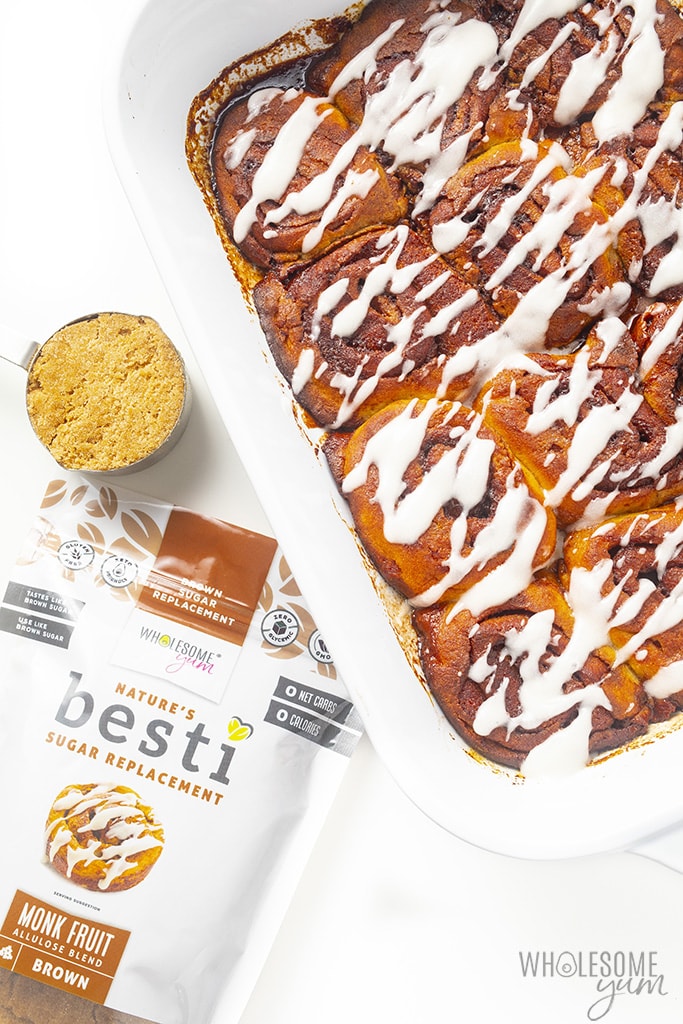 What To Serve With Easy Keto Cinnamon Rolls

What do you need with your keto cinnamon roll? Not much! Perhaps a warm coffee or tea, or maybe some eggs. Here are a few options:

If you like this fathead cinnamon rolls recipe, you’d also love some of my other fathead dough recipes: 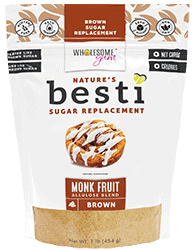 Get Besti Brown Keto Sweetener For Your Keto Cinnamon Rolls!

Meet Besti Brown Monk Fruit Allulose Blend, the brown sugar replacement that has the moisture, color and flavor of brown sugar - with NO aftertaste & 0 net carbs! 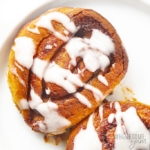 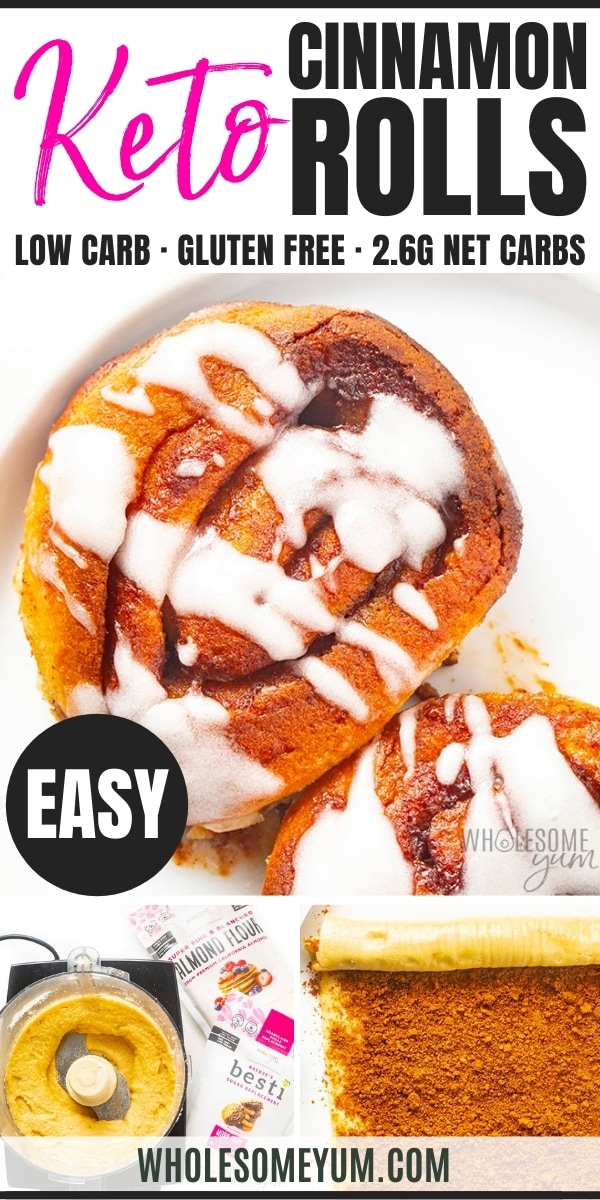