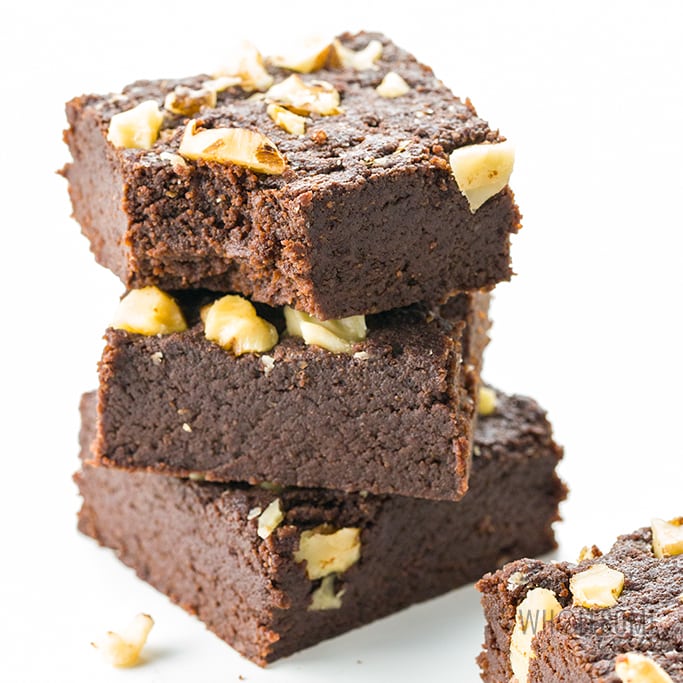 Some people might say you can’t go wrong with brownies, but I think you can. In my book, they need to be super fudgy… which is why I’ve been working on these fudgy keto brownies with almond flour for a really long time. And after more than half a dozen trials, I’m pretty sure this is the best keto brownies recipe you’ll find anywhere!

If you’re a brownie lover like me, you might want to try my other low carb almond butter brownies, too. But I have to admit, the keto brownie recipe I’m sharing below is my absolute fave!

Tips For How To Make Keto Brownies with Almond Flour

I did tons and tons of testing to bring you the best keto brownies recipe! And, I want to share my discoveries with you. If you want to make sure your keto brownies are suuuper fudgy, follow these tips!

Use plenty of fat.

Just like a good keto fudge, the key to super fudgy keto brownies is plenty of fat. That is what makes them fudgy in the first place!

We use butter for the best flavor, but coconut oil would also probably work.

For the best texture in keto fudge brownies, use blanched almond flour. Almond meal will be more coarse and the texture will be less fudgy.

Use a combination of baking chocolate and cocoa powder.

Many brownie recipes use just one or the other, but the best keto brownies have a combination of both.

The reason is, baker’s chocolate provides a fudgy texture and moisture like cocoa powder cannot, no matter how much butter you add. On the other hand, cocoa powder has a much more intense chocolate flavor, which is also a must in great brownies!

So, using both is the sweet spot. I’ve tested again and again, so the ratio in the recipe below works best!

Mix the batter well, but not too much.

Brownies should be dense, not airy. So, mixing the batter too much can introduce too much air. On the other hand, not mixing enough will yield an uneven result.

Mix just enough to make the batter uniform, but not beyond that.

Don’t be alarmed if the batter looks slightly grainy before baking, though. It won’t be afterward! Here is how it looks in the pan before placing in the oven: 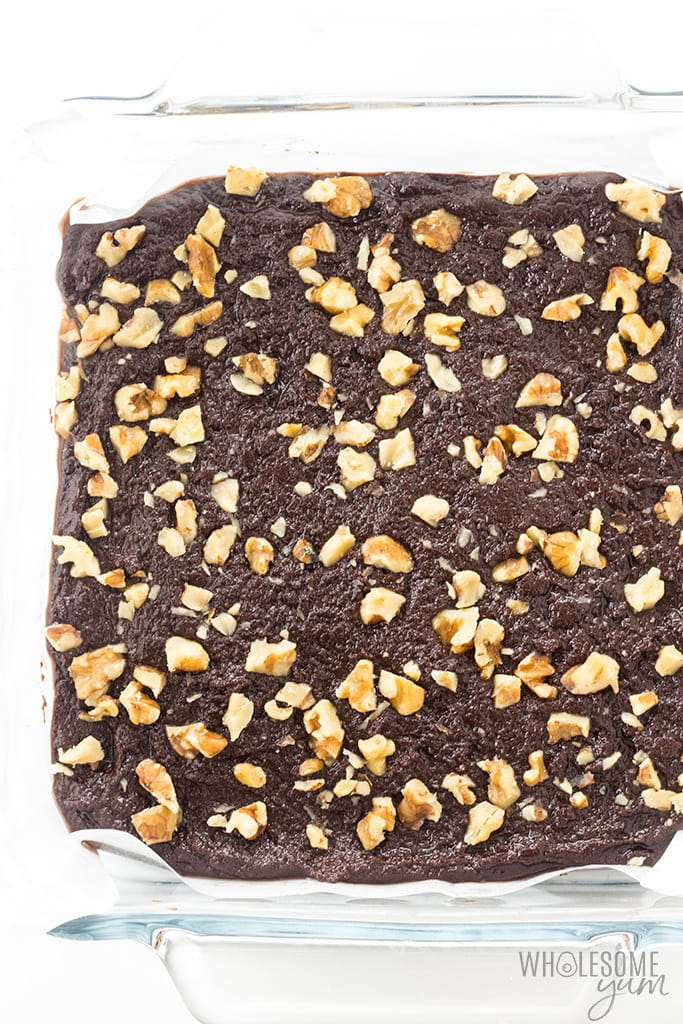 This is the single MOST important tip for fudgy keto brownies! Do not wait for a toothpick to come out clean – if you do, the brownies will be dry.

You should still use a toothpick to test, but the criteria is not the same as other baked goods.

Fudgy keto brownies are done when an inserted toothpick comes out almost clean, but not quite. It should have a little batter left on it, which you can ball up between your fingers. That’s when you know they are done!

IMPORTANT: The brownies will be very soft and not “set” when they are done. This is totally normal, and they will set as they cool.

Don’t pour off any excess butter.

You might see some butter pooling on top of the brownies when they are done. Do not pour it off, which would make the brownies dry!

Let the keto fudge brownies cool and any pooled butter will absorb back inside. 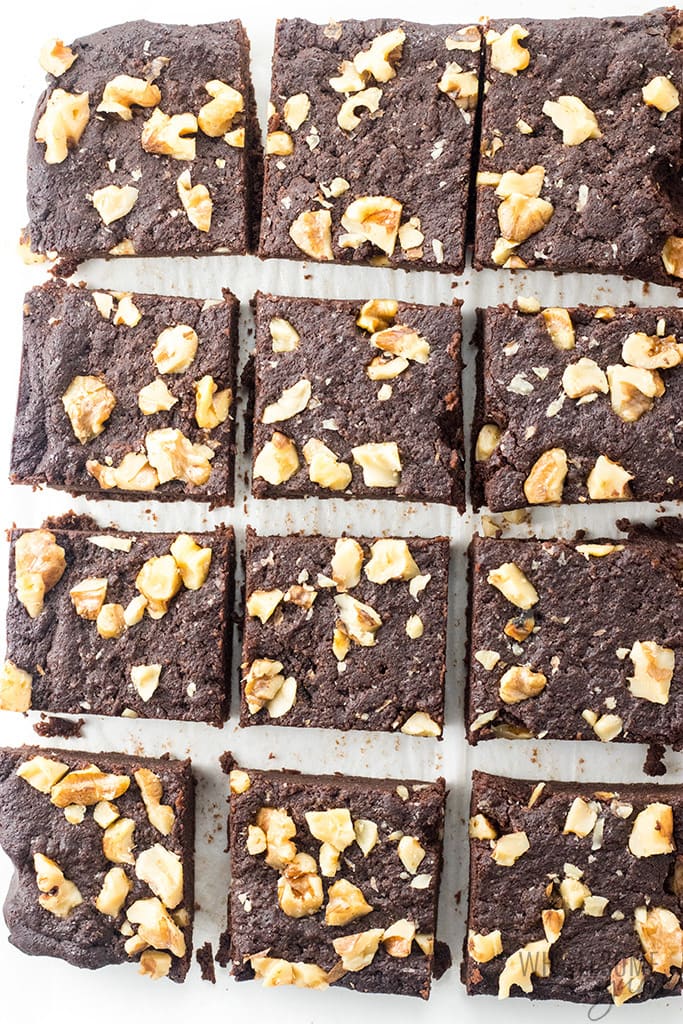 How To Cut Keto Fudge Brownies

If you want the best keto brownies, when you cut them is just as critical as how you cut them.

Tempting as it may be, do not try to move, cut, or eat the brownies right away.

They need to cool completely to set. If possible, let them cool and set overnight.

If you like a warm brownie, you can reheat it later.

They taste even better the next day! Just store them in an airtight container overnight.

Cut using a straight down motion.

When your keto fudge brownies have cooled completely and set, you can go ahead and cut them.

To do so, lift the edges of the parchment paper out of the pan and place onto a cutting board. Support the bottom and be careful not to break the brownies before cutting.

Use a sharp chef’s knife to cut using a straight down motion. Do not see-saw.

Wipe down the knife between cuts.

Since this is such a fudgy keto brownies recipe, the inside of the brownies will tend to stick to the knife.

To avoid getting too much brownie stuck to the knife, simply wipe down the knife between cuts. You can even dip in water and then lightly dry between cuts, if needed. 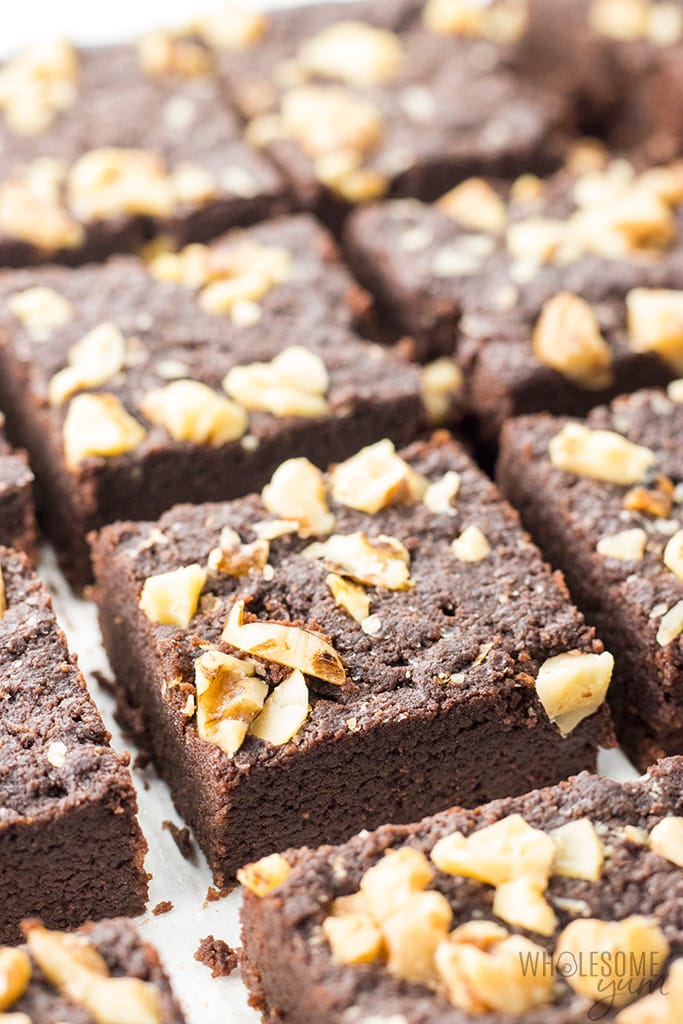 How To Store Keto Chocolate Brownies

Fudgy keto brownies are best stored on the counter, in an airtight container. They will last 2 to 4 days after cutting, or about 5 to 7 days uncut.

If you want brownies to last even longer, here are a couple of tips:

Do not refrigerate brownies. They will dry out faster, due to the lower temperature and lower humidity in the refrigerator. 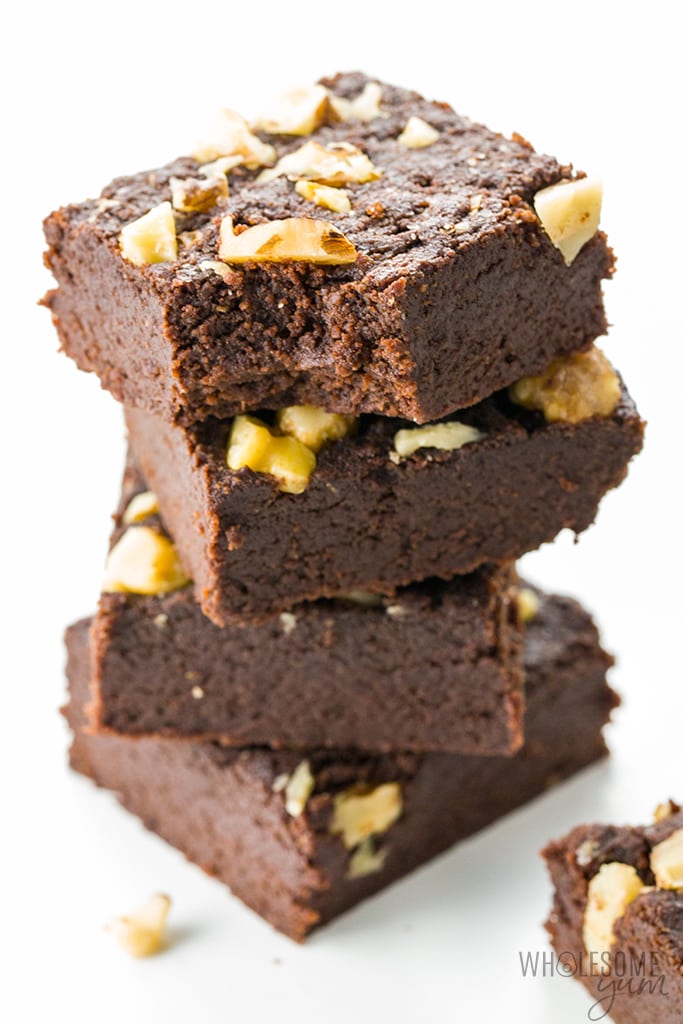 Can I Freeze Keto Brownies?

For the fudgiest end result later, wrap the uncut keto chocolate brownies in two layers of foil and then plastic wrap over that.

If you want the convenience of separate pieces, you can cut them first. But, be aware that keto brownies with almond flour will be a bit more prone to drying out if they are stored pre-cut.

Either way, frozen keto brownies will keep for about 4 to 6 months. Thaw them before removing the wrapping, so that less moisture escapes. If you froze brownies uncut, you’ll want to thaw them completely before trying to cut them.

If you like these low carb brownies, here is more chocolate-y-ness to try:

Fudgy Keto Brownies with Almond Flour:
Pin to save for later! 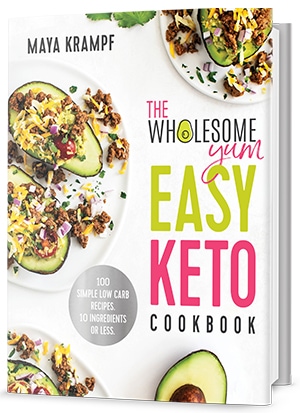 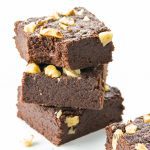 Update: This recipe was originally written with 3/4 cup butter and using granulated erythritol. It has been updated to 1/2 cup butter and using powdered sweetener instead, which in testing has created better results (more fudgy brownies). The version in my cookbook uses powdered erythritol and the version above uses powdered allulose, which creates even smoother fudge brownies. This information is here in case you prefer one of the old versions.

Nutrition info does not include optional walnuts.

Tap here to jump to the video for this recipe -- it's located directly above the ingredients list. It's the easiest way to learn how to make Keto Brownies!

I'm Maya Krampf - cookbook author, recipe developer, writer, and photographer for low carb recipes. My keto blog features natural keto recipes, as well as healthy proteins and veggies for everyone -- all with 10 ingredients or less! 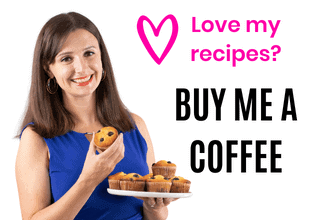 Buy Me A Coffee