When I first heard about “sex in a pan dessert”, I thought the name was some kind of joke. Was this really a thing? Apparently, it’s been around for years, under many different names. I’m not really sure what the origin is.

Intrigued by all the flavors in a chocolate layer dessert, I set out to find how to make sex in a pan my way. Of course, that meant low carb, gluten-free, and healthier.

Layers in Sex in a Pan Dessert

Traditionally, sex in a pan dessert contains six layers. These include:

All the versions that I know of are made with sugar and wheat flour. In fact, a couple of the layers usually include instant pudding. For me, these would be no, no, and definitely not.

I knew there was a way to make it better and low carb – without sacrificing the sinfully delicious taste and texture.

My take on chocolate layer dessert isn’t exactly healthy, but at least it is gluten-free, sugar-free, and made without questionable ingredients.

It does include similar basic layers:

Okay, it’s not quite identical. (Maybe I should call it gluten-free chocolate lasagna instead?) But, it’s close enough that I’m still declaring it sex in a pan. 😉

Best of all, none of my extended family could tell the difference when I served it. Yay! (Yes, I served a dessert called “sex in a pan” for family. I’ll get to how that went in a minute.)

A (Healthier) Easy Sex in a Pan Recipe

An easy sex in a pan recipe is a challenge when you are trying to keep it to real food ingredients and somewhat healthy. I’m not going to lie, it’s definitely calorie dense and on the heavier side. But, at least there are no artificial ingredients. And, it’s still pretty simple to make – no processed pudding mix required!

The other aspect I struggled with was keeping the sex in a pan recipe under ten ingredients total. After all, “ten ingredients or less” is my thing. Definitely not easy with a six layer dessert!

Fortunately, I was able to repeat many of the ingredients among the different layers, so it worked out. It actually came out to nine ingredients, although my original version had ten.

I skipped the vanilla pudding layer, because patience isn’t my strong suit. Waiting for each layer to set already took long enough with five layers! It’s totally worth it though, I promise.

Anyway, the other layers are so decadent that I don’t think you’ll miss the one I omitted. If you really like vanilla pudding, feel free to add a layer of your favorite kind before the chocolate layer.

In fact, I was so determined to make this low carb dessert a little faster than traditional sex in a pan recipes, that I decided to modify the chocolate layer from the original. (I’m pretty sure that most of us don’t want to spend hours upon hours making our low carb or no carb desserts!)

The older version required making chocolate pudding using xanthan gum, and waiting hours for it to set. Some people reported issues with the pudding setting, and the xanthan gum was less readily available for many.

More importantly, it was So. Much. Waiting. I cut that out and replaced it with a chocolate whipped cream instead. So much faster, and just as delicious!

… UPDATE: Okay, apparently I didn’t realize how many of you preferred the pudding version with the xanthan gum! I’m adding it back in, so you can decide which version you want. 😉

Another option is to swap the pudding layer with your favorite low carb pudding recipe. You can even try adapting this vegan chocolate pudding recipe by using low carb sweetener and xanthan gum to thicken.

One of the Best Low Carb Desserts for Any Occasion

Despite the conflict between the name and the fact that I had family coming for New Year’s, I made this sex in a pan dessert for the celebration. I wanted something that looked cool, tasted extra rich, and it had to be something I wouldn’t make every day.

Fortunately, even with multiple steps, it turned out to be a lot easier than it looks! And, the rave reviews were worth the effort.

I’ll admit, I couldn’t bring myself to tell my family what this thing was called. And they did all ask, because it doesn’t look like any other dessert people have seen before. I just said it’s “chocolate layer dessert”. Feel free to do the same if you’re in the same boat!

You may be wondering why I’m sharing this chocolate layer dessert recipe now, toward the end of January. Isn’t this month supposed to be all about healthy eating for many people? Well, yes. But like I said, this low carb dessert is definitely healthier than traditional sex in a pan.

The other reason is, Valentine’s Day is coming up! What better time than that to make this sugar-free sex in a pan dessert? It’s special, it’s chocolate, and you won’t have to come up with an alternate name like I did.

Now, I already fixed the majority of the first problem with layered low carb desserts – the waiting! I say majority because I still recommend refrigerating it for an hour or two at the very end before serving. But, unlike other chocolate layer dessert recipes, at least you don’t have to wait between layers.

So, the only slight challenge that’s left with a treat like this? Apparently, a creamy six layer dessert (or five layer dessert) can be tricky to remove from the pan. It always falls apart on me! The first piece definitely won’t look pretty, so be prepared for that.

After that one piece, make sure you’re cutting all the way through the crust layer and use a thin, sturdy spatula to remove each piece from the pan. I love this silicone cookie spatula, which is the perfect size.

Just remember, it will still taste delicious even if you mess up on the serving process. And if you love chocolate and whipped cream, it will be one of the best low carb desserts you’ve ever had.

Tools To Make Sex in a Pan Dessert 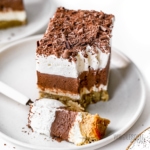 Update: The old version of the chocolate pudding layer is back by popular demand! I've posted both options above, so you can decide which one you want. The older version takes longer and sometimes people have issues with thickening, but tastes more like pudding when you get it right. The newer version is faster but more like a chocolate whipped cream layer.

This video shows how to make sex in a pan dessert using the newer version of the chocolate layer.