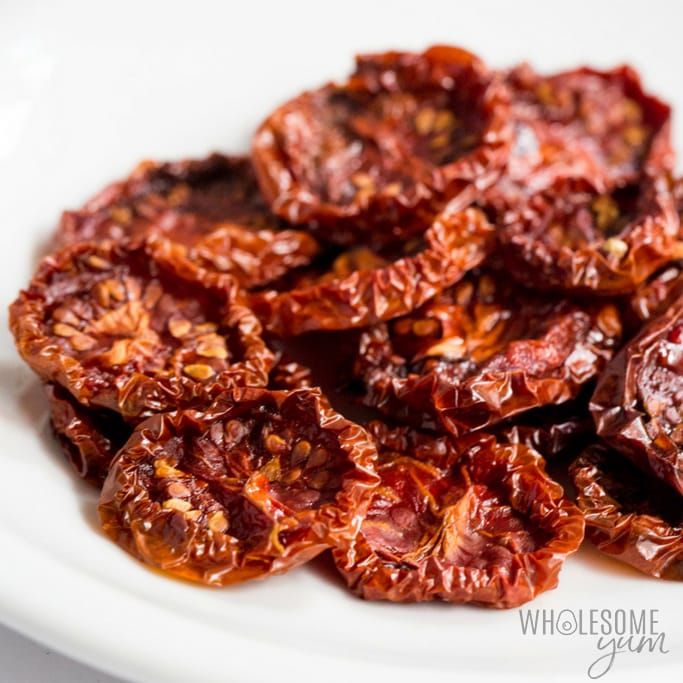 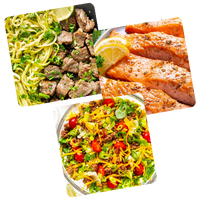 Happy August! I love this time of year, when so much fresh produce is right in season… not the least of which is tomatoes. (Give me all the Greek Mason jar salads and fresh tomato salsa!) If you’re running out of things to do with them, or you simply have too many, you’ll want to know how to make sun-dried tomatoes in the oven.

If that sounds like too much work or you’re intimidated, don’t be. Making homemade sun-dried tomatoes is surprisingly simple!

What Are Sun-Dried Tomatoes?

Another method for homemade sun-dried tomatoes is in a dehydrator, but since I know many people don’t have one, I wanted to show a more common way.

So, I’ll show you how to make sun-dried tomatoes in the oven instead! 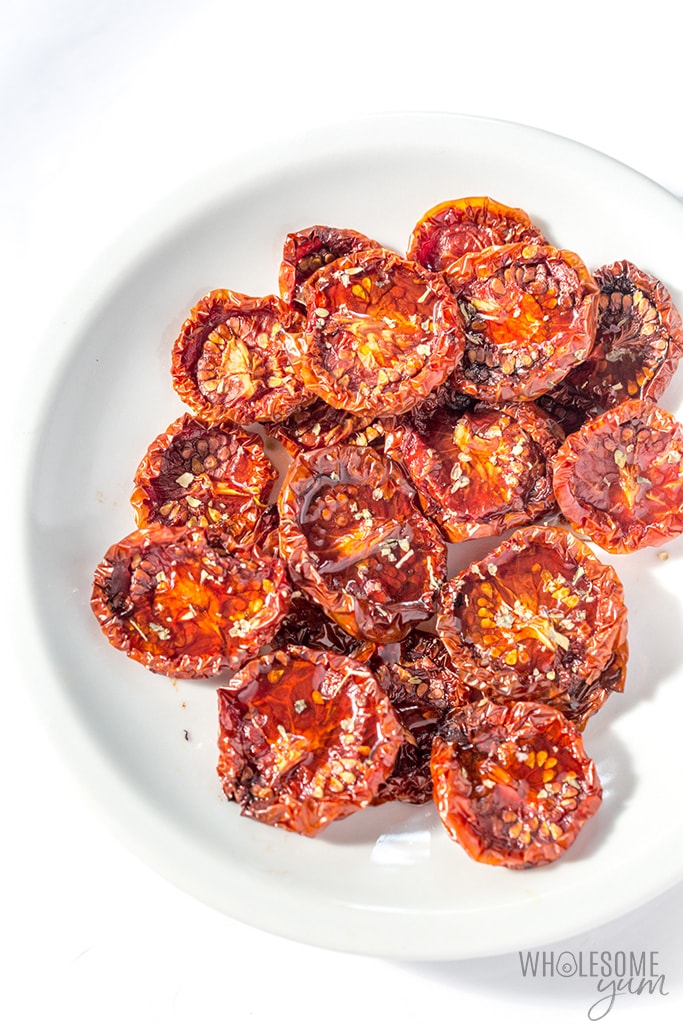 Are sun-dried tomatoes healthy? Yes! They have essentially the same nutrients as fresh tomatoes. That makes them good sources of vitamin A, vitamin C, vitamin K, thiamin, niacin, riboflavin, iron, magnesium, potassium, and dietary fiber. Everything is more concentrated, since the water content is removed.

That being said, if you are following a low carb or keto diet plan, be careful with the sugar and carbs in sun-dried tomatoes. Like all dried fruit, they are fairly calorie- and carb-dense, though much less so than other dried fruit. They are easy to overeat if you have them plain, but are excellent for flavoring dishes and using in recipes.

That may sound like a lot of carbs, but it’s more typical to use 1/4 to 1/2 of that amount in an entire recipe. When used that way, they can still be a delicious part of a low carb lifestyle.

This homemade sun-dried tomatoes recipe has fewer calories and carbs, because they turn out a little more plump when they are homemade – which is a good thing for both taste and nutrition! 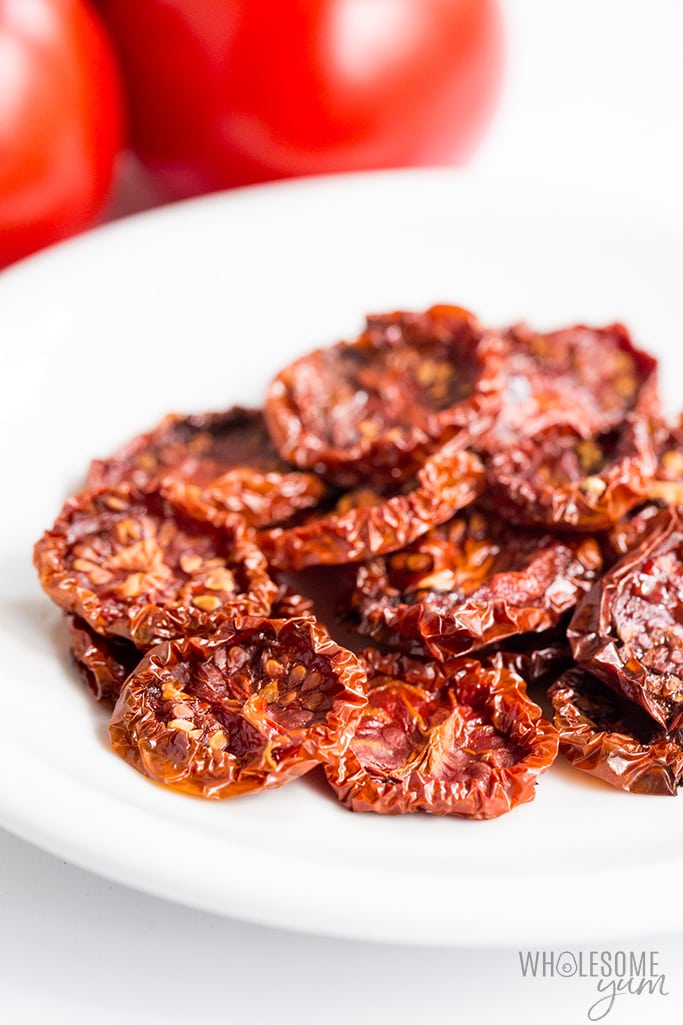 How To Make Sun-Dried Tomatoes in the Oven

How do you make sun-dried tomatoes in the oven? It’s easy. All you need are tomatoes and sea salt!

Slice the tomatoes in half, remove the parts that attached to the stems, sprinkle with sea salt, and bake. It’s pretty straightforward, but here are a few tips:

I used Campari tomatoes, but even cherry or grape tomatoes are great to use. Smaller tomatoes have less water and seeds, so they dry out faster and you end up with more sun-dried tomatoes.

Go light on the salt.

Since the tomatoes will shrink a lot when they dry, be careful not too add too much salt. You need only a very light sprinkle. 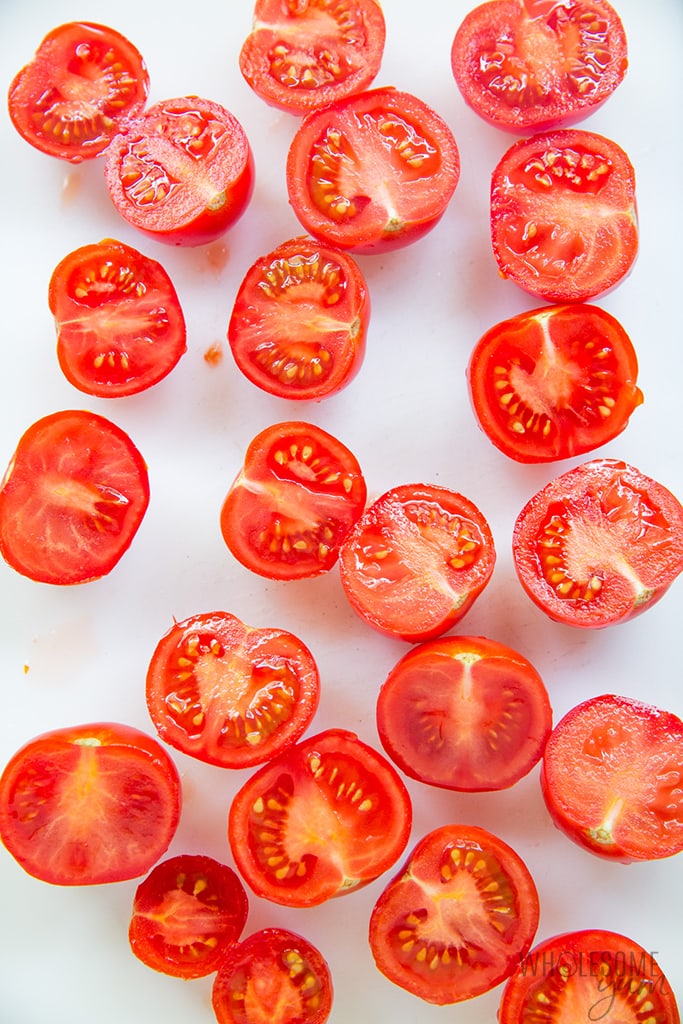 Feel free to add spices before or after.

Use any spices you like! I used Italian seasoning and sprinkled it at the end, but you can skip it or use any kind you like. Dried spices work best for homemade sun-dried tomatoes. You can either add them at the end of sprinkle them in the beginning and bake with them.

Press down on the tomatoes about halfway through to remove the juices.

Use a spatula to press on the tomatoes after about 2 to 2 1/2 hours. This will help them dry out faster. Just be careful – they can squirt at you!

Leave the tomatoes in the oven with the door propped open.

If your tomatoes don’t seem to be quite dry at the end, you can keep baking them. But another tip to get them even more dry is one I use for drying all kinds of recipes.

Leave them in the oven, with the oven turned off, and prop the door open with a wooden spoon. This will encourage air flow and they will dry even more.

Make sun-dried tomatoes in a dehydrator if you have one.

Sun-dried tomatoes in the oven are awesome, but if you have a dehydrator, it’s a more hands-off option – and saves you turning on the oven during the summer.

How To Use Sun-Dried Tomatoes

Now that you know how to make sun-dried tomatoes in the oven, how do you use them? There are lots of ways!

You can throw them in salads, soups, sauces, omelets, and chicken dishes. People who aren’t low carb would also like them in pasta, but I’d much rather have zucchini noodles – same idea applies.

You can also make recipes with sun-dried tomatoes! Some of my favorites are: 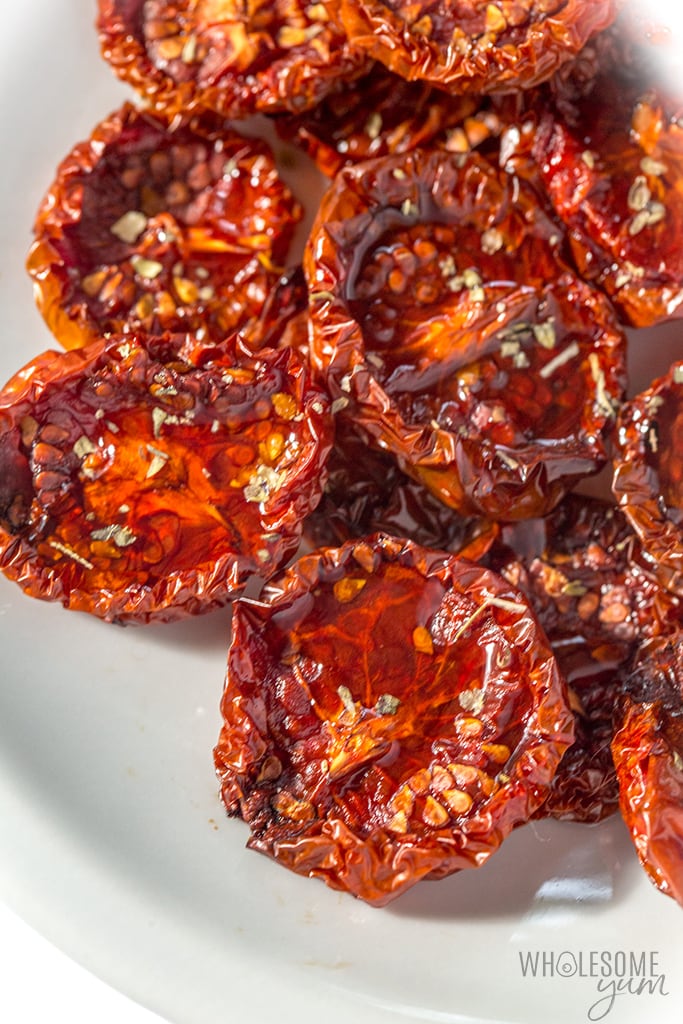 How Long Do Sun-Dried Tomatoes Last?

How long sun-dried tomatoes last depends partly on how you store them. There are a couple options…

1) Refrigerate: You can keep them in an airtight container in the fridge for up to a week.

However, they still won’t last as long as commercial sun-dried tomatoes packed in oil, since the jar isn’t sealed. That being said, the sun-dried tomatoes will remain plump much longer this way. You’ll still want to refrigerate the jar.

Once they are solid, you can transfer them to a freezer bag. If they are too rigid after thawing, you can reconstitute them in water or oil.

How To Make Sun-Dried Tomatoes in the Oven 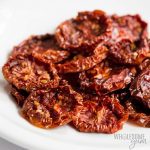 How To Make Sun-Dried Tomatoes In The Oven

Learn the EASIEST method for how to make sun-dried tomatoes in the oven! Plus, get tips, recipe ideas, and storage instructions.

Serving size: 4 large pieces (4 halves), or about 2 tablespoons, or 1/6 of entire recipe

Entire recipe makes about 3/4 cup. The exact amount will vary depending on how much you dry them and how watery they were to begin with. 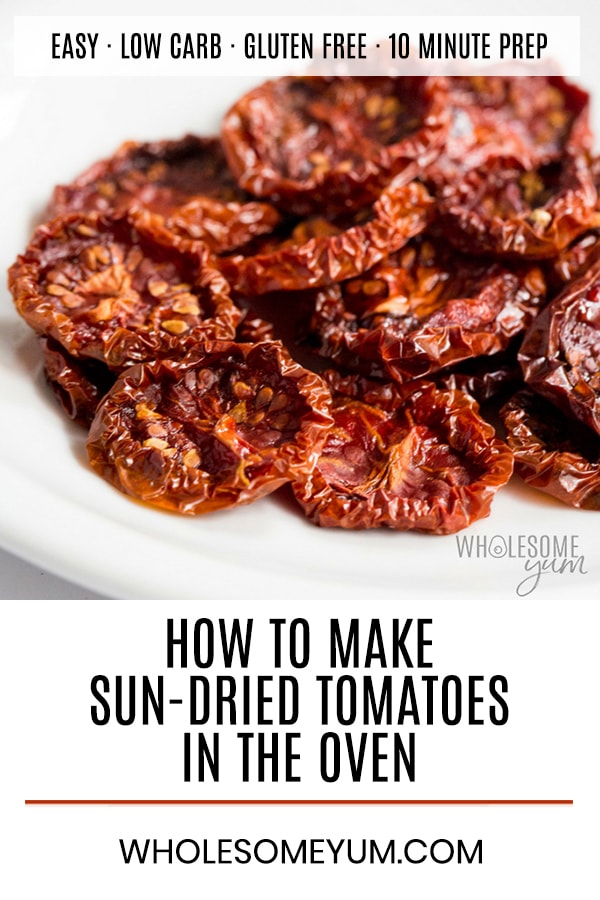