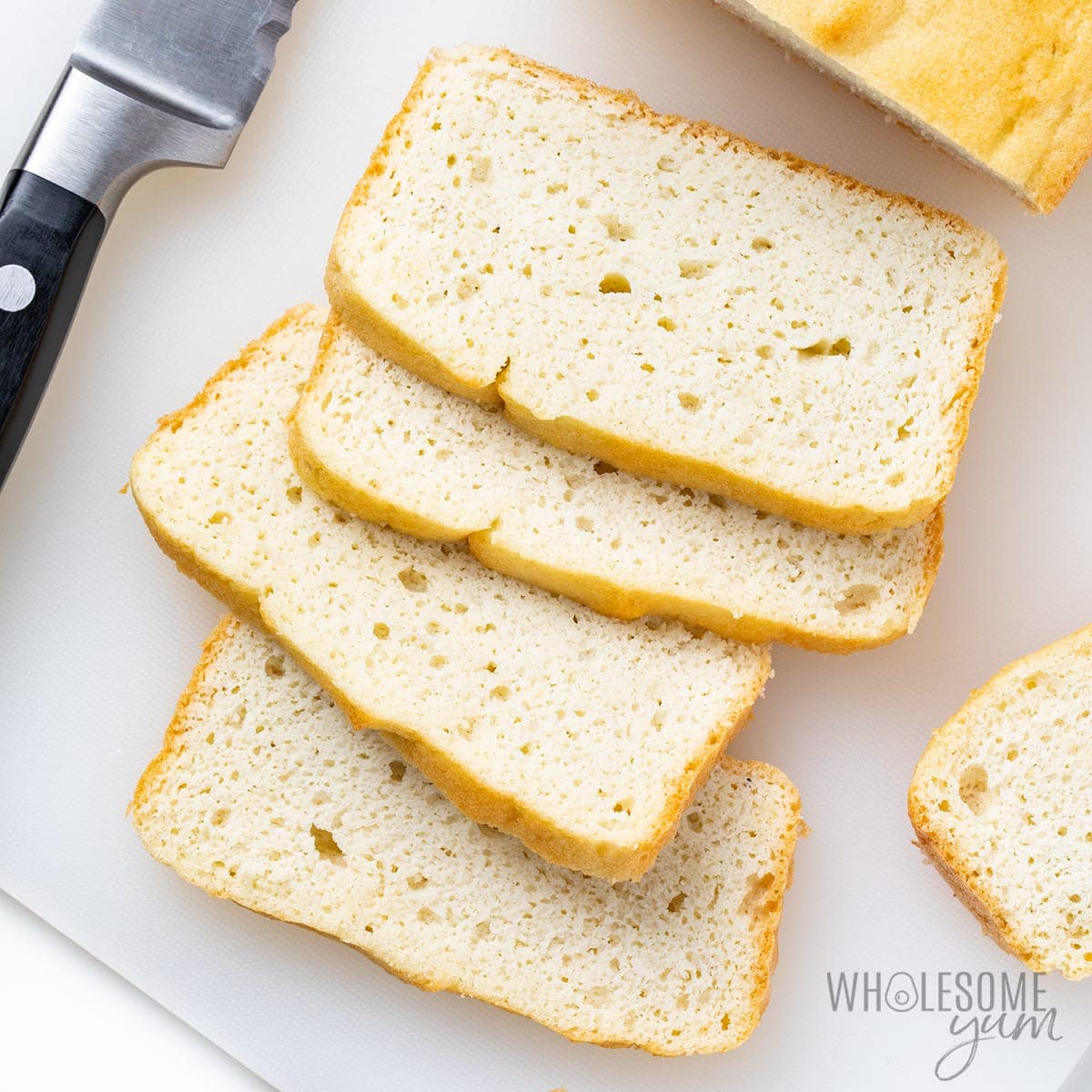 People often ask me what the best keto bread recipe is, or in general, how to make keto bread (and occasionally paleo bread as well) that actually tastes good and has the right texture. I often say it depends on what you are looking for. There are already several delicious bread recipes on the blog, including the most popular one ever, low carb bagels. But, one thing we didn’t have yet is a true keto friendly white bread for sandwiches — until now.

This is actually the second low carb bread recipe that I made with almond flour. My first almond flour bread recipe has been well received, but that one is more like a wheat bread in taste and color, and required psyllium husk powder that can be tricky to find for some people. (If you’re looking for a keto friendly bread recipe that doesn’t use any type of flour or specialty ingredients, you might like my light and airy cloud bread recipe instead.)

This time, my goal was to create an easy keto bread that you can make using ingredients found at any grocery store (though I do highly recommend my Wholesome Yum super fine blanched almond flour and this coconut flour for the best consistency). At first, I considered making it only almond bread or only coconut bread, but the combination of both worked best. I wanted this keto white bread to taste like a “real” one. And now it’s one of my favorite keto recipes ever!

What Is Keto Bread?

Keto bread is simply bread made with keto friendly ingredients — in this case, almond flour and coconut flour. Low carb breads are notorious for being dense or crumbly, but not this one, thanks to a special technique I’m sharing below.

Can you eat bread on keto?

Traditional breads made with wheat or other grains are not keto friendly, but you can still eat bread on keto by making your own or buying one that uses low carb ingredients.

TIP: For those looking for a shortcut, I’ve created a keto bread mix. It can also be used as a base to make keto yeast bread.

If you’re looking for how to make keto bread at home yourself, this recipe is your answer. And other than my bread mix mentioned above, this is definitely the best keto bread recipe I’ve ever had.

The combination of taste and nutrition makes it the best keto bread in my book.

This section will explain how to choose the best ingredients for keto friendly bread, what each one does in the recipe, and substitution options. For measurements, see the recipe card below.

This easy keto bread recipe has 5 required ingredients (plus salt), and a few highly recommended ingredients to make the best result.

Optional ingredients, but recommended for the best keto bread:

While the above ingredients are the only ones absolutely necessary, I’ll go over what each of the optional ingredients does, so that you can decide whether you want to include them. My recommendation is to use them all if you can, for the best keto bread.

How To Make Keto Bread

This section will show you how to make keto bread with step-by-step photos and details about the technique. For full instructions, see the recipe card below.

After making this keto bread recipe several times, and getting feedback from readers, I’ve assembled a list of tips to help you make sure it’s the best keto bread (or at least best keto white bread) you’ve tried!

It’s important to get the egg whites to very stiff peaks before combining them with any other ingredients. It will be a little challenging for them to mix, so having them start out super stiff and fluffy is the only way you’ll stand a chance at not having them fall when you fold them with the rest of the batter. Follow the tips below to get the right peaks.

After mixing the first half of the egg whites into the batter in the food processor, you’ll need to fold that mixture into the remaining egg whites. It’s important not to break them down completely at this step. Otherwise, your bread will be dense and flat! Just keep folding gently until you don’t have chunks or streaks.

A few people have complained about the batter being too thick to fold in the egg whites. Most likely this was a difference in measurements or ingredients, but if this happens, you can salvage it. Just pulse in a little more egg whites into the food processor to make the main batter a little thinner, then fold that into the egg whites.

3. Round the top upfront.

This keto bread doesn’t rise much. Most of the volume comes from the egg whites, so the height will be similar before and after baking.

To reduce the chance of sinking and for a more familiar bread shape, round the top before placing it in the oven.

4. Use a lower oven temperature.

This keto friendly bread recipe was originally written to be baked at 350 degrees F, but I no longer recommend this. Instead, bake it at 325 degrees.

A lower temperature means baking it for longer, which prevents you from ending up with a dreaded mushy or wet center when the top is already browned.

The biggest mistake people make when making this keto bread is removing it from the oven too soon. The result will be a fallen middle at best, and a wet, gummy center at worst.

It takes a LONG time to cook through the center, long after the top is golden. This is why we tent the top with foil in the middle of baking – to prevent the top from burning.

The most common reason that any bread falls is that it needed to bake for longer. That being said, I’ll be perfectly honest – sometimes this keto bread recipe falls anyway, even despite doing everything else right. Fortunately this isn’t a huge deal because it still tastes delicious – IF you baked it for long enough and the center is cooked through.

6. Don’t use the toothpick test.

This will come as a surprise for many people, and it’s a change from my original keto bread recipe. Do not use a toothpick to test for doneness. It will seem like it’s done before it actually is!

Instead, use these markers of doneness for this white paleo bread:

Just to avoid any confusion, this keto sandwich bread is not a crusty baguette like you’d find in Paris. It’s a soft, fluffy, airy bread. Which I think is awesome!

But, if you’re looking for a paleo bread with a crust, I recommend you try my other low carb almond flour bread recipe instead.

I hope these tips help if you run into any issues, but if you have any others, please leave a comment below and let me know. I’ll try my best to help! I want this keto bread recipe to work for you.

Ways To Use Keto Bread

How do you use keto bread? The same way you could use any white bread! Here are a few ideas:

I haven’t tried breadcrumbs or croutons yet. If you do, let me know how that turns out.

If you find other ways to use this paleo keto bread beyond sandwiches and toasting, tell me! I love hearing your ideas.

Unlike most bread that goes stale more quickly in the fridge, refrigerating this one is fine. It will last about a week this way, maybe a few days past that.

Storing in anything that traps moisture, like plastic bags or cling wrap, is not recommended. Condensation will form if you do this.

FYI: Keto white bread is prone to absorbing moisture. If it becomes a little “wet” with storing over time, you can recover it by toasting it in the toaster.

Can you freeze keto bread?

Yes, you can freeze keto bread! Freezing it for long term storage will work, so you can keep it for months if you want to.

I’d recommend slicing it first, so that you can grab just what you need out of the freezer and pop it in the toaster.

Looking for a different kind of keto bread? Here are some others to try: 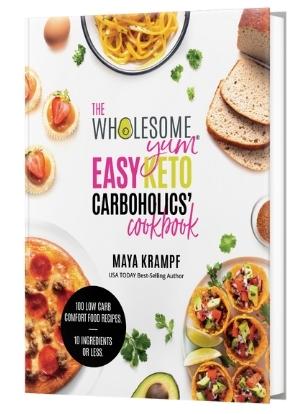 This reader favorite recipe is included in The Wholesome Yum Easy Keto Carboholics’ Cookbook! Inside this beautiful hard cover keto recipe book, you’ll find 100 delectable, EASY keto recipes to replace all your favorite carbs: bread, pasta, rice, potatoes, desserts, and more… each with 10 ingredients or less! Plus, a photo, macros, & tips for every recipe. 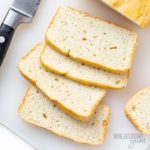 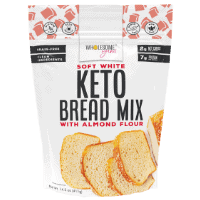