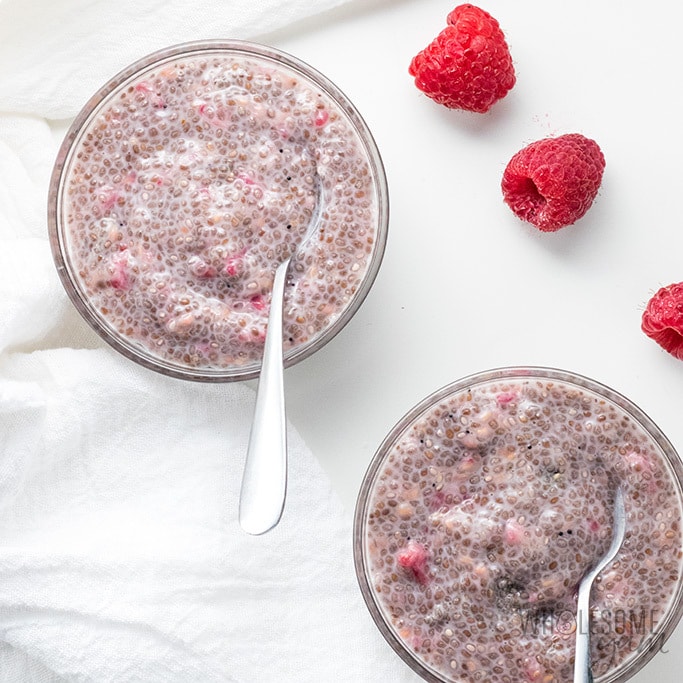 This post is sponsored by Vital Proteins. All opinions are my own and I only share products I personally love. Thanks for supporting the brands that make this site possible!

Have you jumped on the chia seed pudding bandwagon yet? Okay, who am I kidding? I’m probably the last person on it! Well, I say better late than never. That may be my motto more than I care to admit in life, but low carb chia pudding sure was worth the wait.

Naturally, when I try something it means it’s time for a little low carb makeover… we’re making keto chia pudding that actually tastes good, without the sugar and carbs. And, trust me when I say raspberry chia pudding with almond milk – or coconut milk if you prefer that – is so much more delicious than the boring plain kind!

What Is Raspberry Chia Pudding?

Overnight chia pudding is just what it sounds like – a pudding made out of chia seeds, made the night before. When these little seeds are soaked in liquid for a while, they expand (a lot!), forming a thick pudding similar to tapioca.

But, plain chia seed pudding doesn’t have much flavor on its own. It’s really quite bland.

So, I make mine with raspberries and vanilla.

And collagen. Because the answer is always “yes” whenever it’s an option to add collagen. 😉

It can be all of the above! And, this one certainly is.

However, many chia seed pudding recipes use a sweetener that isn’t low carb, such as maple syrup, honey, dates, or even sugar.

That’s easy enough to swap with powdered erythritol for a keto chia pudding! Be sure to use powdered, so that the end result is smooth and not grainy.

If you are following a strict paleo diet and prefer not to use erythritol, stevia or monk fruit are great options that are both paleo and sugar-free. (You can learn more about different alternatives to sugar here.) Check the sweetener conversion calculator to find the amount you need. 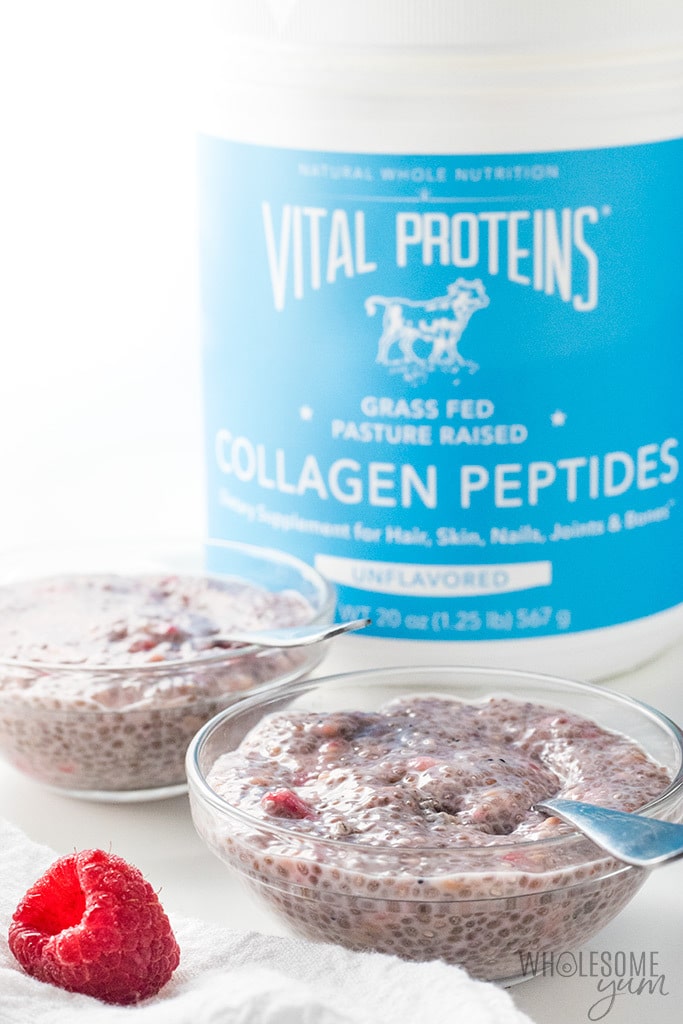 My favorite part of this chia pudding recipe is that I get to sneak in some Vital Proteins Collagen Peptides! I put that stuff into foods and drinks any chance I get.

Don’t miss my other recipes with collagen:

How To Make Chia Seed Pudding With Almond Milk

The process for how to make chia pudding low carb (or not!) is super easy. Basic chia pudding is made with chia seeds and milk, but it tastes much better with raspberries in there!

So we start by mashing the raspberries:

And then stir in all the other ingredients:

Chill until it thickens up:

See? That took all of 5 minutes of your involvement! If you want a low carb breakfast made ahead, it doesn’t get any easier than overnight chia pudding.

How To Make Chia Pudding With Coconut Milk

Making low carb chia pudding with coconut milk is basically the same as using almond milk. But, there is one thing to keep in mind.

If you want to make raspberry chia pudding with coconut milk beverage, the amount will be exactly the same as almond milk. To clarify, that’s the kind that is usually refrigerated next to the dairy milk.

The nice thing about using canned coconut milk is you will have a more rich, creamy chia pudding as a result!

What is the right chia pudding ratio? The answer varies.

It depends on how thick you like your chia pudding, and what else you are pudding in it. If you have other dry ingredients, these will require extra liquid to compensate.

As a general rule of thumb, the ratio between chia seeds and liquid is somewhere between 1:4 and 1:6.

For making a basic chia pudding with no other ingredients, a good amount is 3 tablespoons chia seeds for 1 cup milk of choice.

In the case of this raspberry chia pudding recipe, the raspberries also produce some liquid, but we have collagen and sweetener as additional dry ingredients. So, I experimented and found that only 3/4 cup almond milk is the right amount. The rest of the needed liquid comes from the berries.

Yes and no. It’s true that chia seeds do expand a lot – they can absorb liquid 9 to 12 times their volume!

But, the raspberry chia pudding as a whole generally does not expand. Instead, the liquid migrates from outside the seeds to the inside, forming a pudding consistency.

While it’s not a good idea to fill your bowl or jar to the brim when making chia pudding, you don’t need to leave a ton of extra room for expansion.

Why Didn’t My Chia Pudding Thicken?

If your low carb chia pudding didn’t thicken, don’t worry! Here are a few reasons this could be: 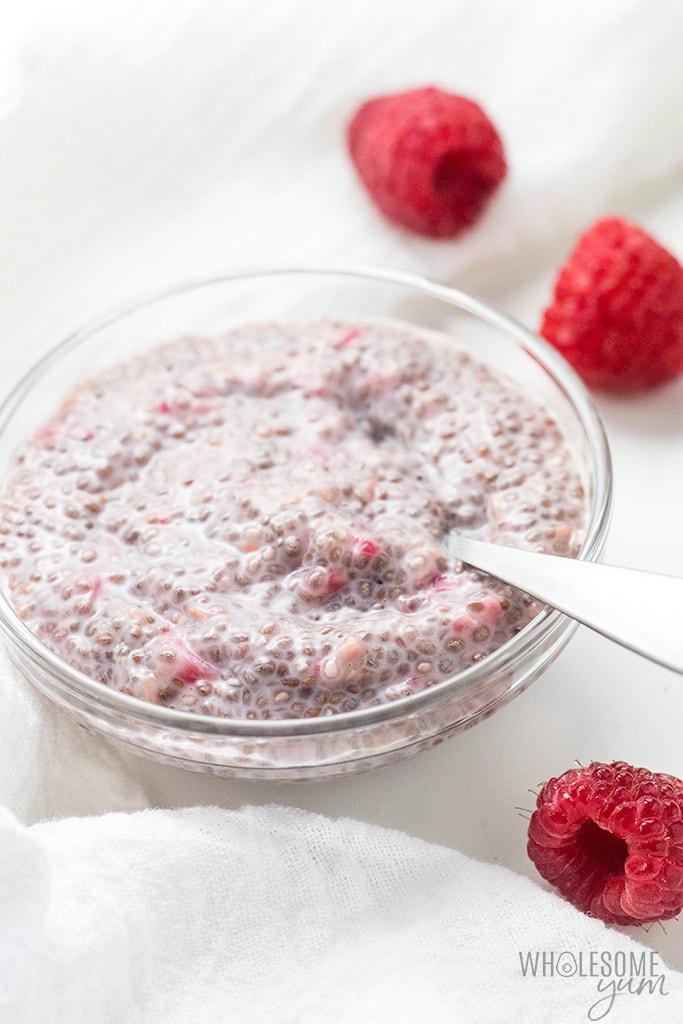 How To Fix Chia Seed Pudding That Didn’t Set

If you waited overnight and your raspberry chia pudding is still too thin, don’t panic! You can save it.

Simply give it a stir, stick it back in the fridge, and check again in 30 to 60 minutes. It will thicken right up!

How To Make Chia Pudding Smooth

This low carb chia pudding recipe keeps the seeds whole. Some people love that texture the next day, while others don’t.

If you fall into the latter camp and want a creamy chia pudding instead, simply blend all the ingredients before placing them in the fridge to chill.

How Long Does Chia Pudding Last?

Even though it’s called overnight chia pudding, it actually lasts in the fridge for about week. The recipe below is for one (generous) serving, but you can scale it to any number you want.

If you make multiple servings of keto chia pudding, you can portion them out into individual containers or little jars (meal prep style!), or store everything together in one big container.

Can I Freeze Keto Chia Pudding?

Can chia pudding be frozen? Yep, totally! You can freeze it and then thaw it, though preferences vary on whether the texture is acceptable afterward.

As another alternative, try freezing the keto chia pudding in molds to make raspberry popsicles! 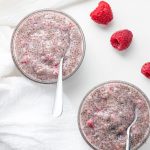 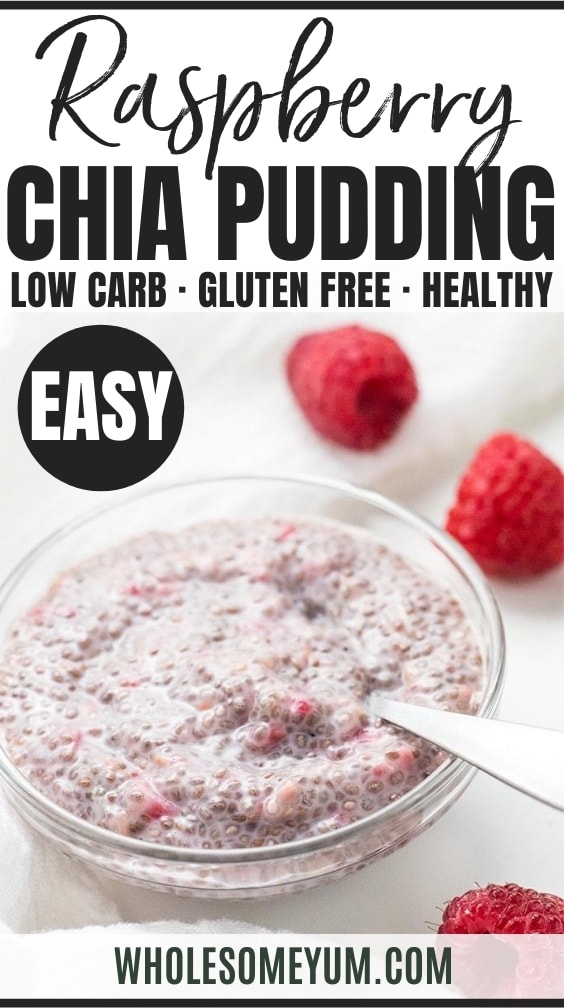