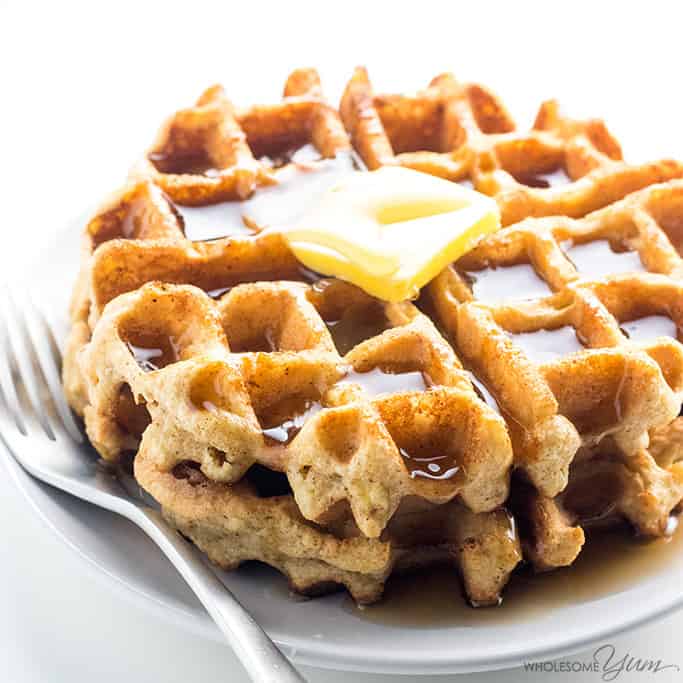 We’re back from vacation! Oh my goodness, I missed the kids. We didn’t bring them because we really needed a break, but maybe that wasn’t such a good idea. I couldn’t stop thinking about them! And when I got back, I couldn’t wait to make my daughter one of her favorite breakfasts. Keto paleo almond flour waffles!

Even though we are back, I have a few more days left before I have to return to work at my day job. There’s a lot to catch up on with the website, but I’m also looking forward to spending this time with my kids.

Even though I love all of the above, it gets boring after a while. I did miss my almond flour and coconut flour. Needless to say, I was looking forward to coming back to make low carb pancakes, keto French toast, and almond flour waffles! 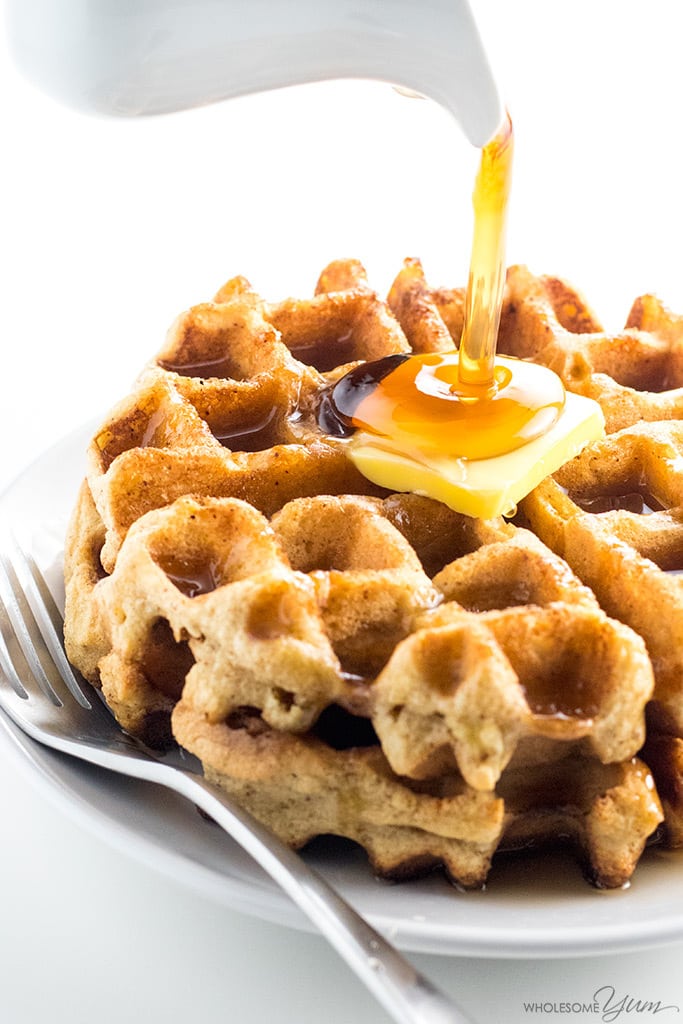 Personally, I consider these grain-free waffles to be both keto and paleo. They have no wheat, no grains, and nothing artificial. Since they are made with almond flour, they are gluten-free waffles, too.

The only part that may have differing opinions is the sweetener, but you can choose one that fits your needs.

Like I usually do, I used erythritol to sweeten my keto waffles. You don’t need much, just a couple tablespoons. I like this natural sweetener, but you can use any other one you like.

If you want purely paleo waffles (no sugar alcohols), try coconut sugar. Stevia will also work fine, you’ll just need a smaller amount depending on how concentrated yours is.

No matter what sweetener you use, choosing high quality almond flour is a must for these keto waffles to turn out right. It needs to be blanched and finely ground, like this one. If it happens to be clumpy, sift it! Do not use almond meal, which is grainy.

The milk in these grain-free waffles thins out the batter to the right consistency. I used unsweetener almond milk, but any milk is fine. Coconut milk will work, but may impart a very subtle coconut flavor. If you don’t care about dairy-free, you could even use half & half or heavy cream.

Add-ins for Waffles with Almond Flour

This recipe is the perfect base for any kind of keto waffles you like. I have grand plans for making flavored ones out of them.

Some flavors may require modifying ingredient ratios, but a safe bet is add-ins. These would be things like fresh blueberries or sugar-free chocolate chips.

If you want to know how to make almond flour waffles in a particular flavor, let me know! I love requests and can add it to my list.

Aside from add-ins, don’t forget the toppings! My favorite is homemade sugar-free maple syrup and a little grass-fed butter. Another thing I like to do is create a berry sauce, similar to the kind used for low carb cheesecake raspberry topping.

Like many low carb almond flour recipes, this one is very filling! The recipe makes large, Belgian-style paleo waffles. You can easily have a half serving (half of the waffle) at a time – especially if you add toppings. 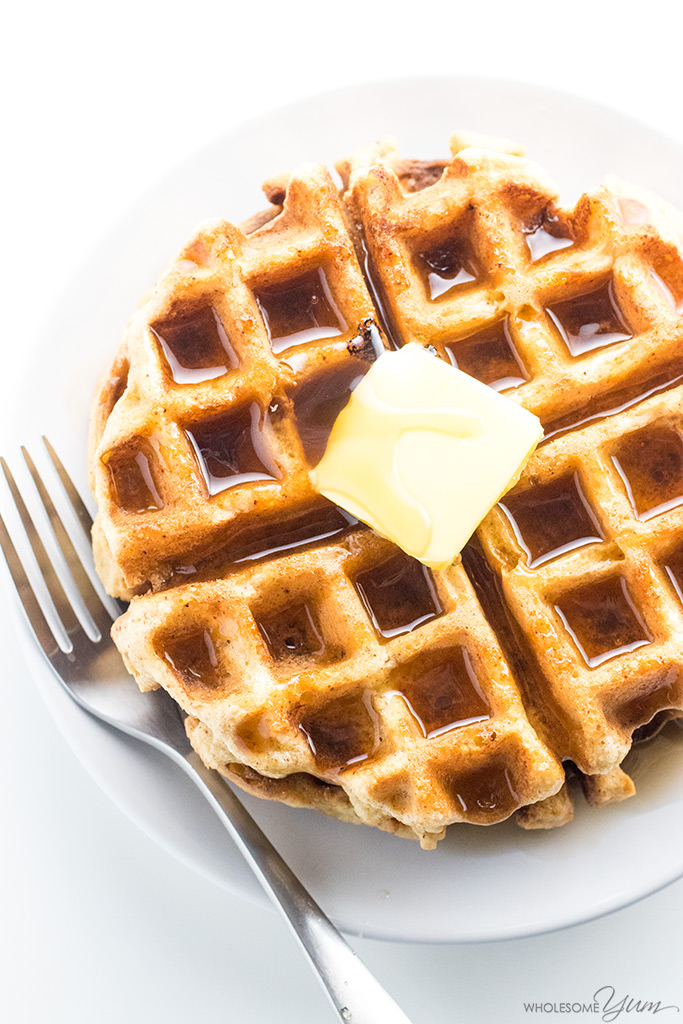 Unlike many almond flour waffles recipes, these are pretty light inside – the way real waffles should be.

This is one of the two common problems in most keto or paleo waffles recipes. First, they don’t crisp up the same way that wheat flour does. Second, almond flour can be very dense. Probably not really what you’re going for when it comes to waffles.

Fortunately, I came up with some ideas to improve on both these issues. I tested the recipe several times, because I really, really wanted to make the keto waffles crispy and light. The result is not perfect, but in my opinion much better than the alternatives.

To make the waffles light, I used the technique in my favorite paleo keto bread. Beat the egg whites to stiff peaks first, stir together the rest of the ingredients, and finally fold in the whites. The result is a light, fluffy batter. It’s absolutely perfect for the best paleo waffles that are light and airy inside! 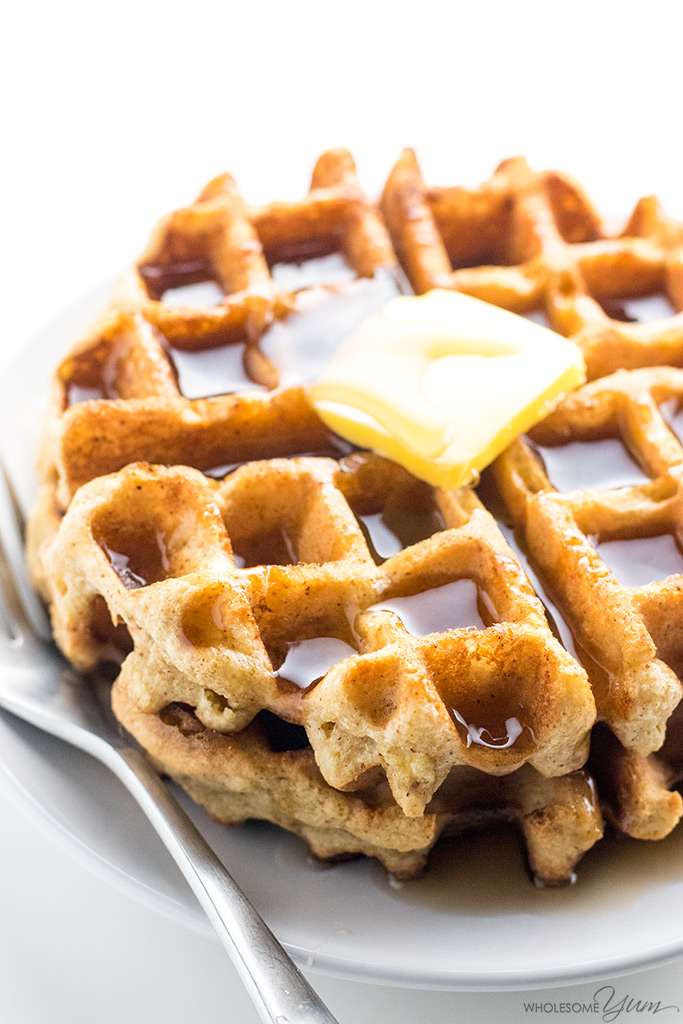 Now, let’s talk about the most important aspect of this low carb almond flour waffles recipe. You can actually get them crispy! It’s a nice change of pace from other waffles with almond flour.

The way to make them crispy came from my flourless almond butter waffles recipe. That one has no flour at all – not even gluten-free or low carb flours! It’s still one of my favorites, but I wanted waffles that are a little lighter inside and still crispy on the outside.

This time, the waffles to contain flour (almond flour, that is). But, I still included some almond butter to help get them crisp. I’m pretty sure peanut butter would work too, if that’s what you have and don’t need them to be paleo.

Even with the almond butter, the paleo waffles are somewhat soft when you first open the waffle iron. They crisp up as they go from hot to warm, which is why I suggest turning off the iron and letting the waffle sit in there for a minute or two to cool a little. That makes it easier to remove without tearing.

If you want them extra crisp, you can pop the waffles in the toaster or even the oven for a couple minutes. I’m pretty sure a toaster oven would also work, but don’t have one to test it out. For an extra crispy waffle, try keto chaffles instead!

For those that are impatient like me, you can skip the toaster/oven step to crisp them up. Even without it, the taste and texture of these keto waffles is pretty amazing. They do still get fairly crisp. Perfect for breakfast, brunch, and even breakfast-for-dinner! 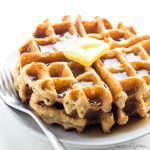 Make almond flour waffles in just 20 minutes! These easy keto waffles with almond flour are quick to make, using natural ingredients. They even get crispy!

These are very filling and the recipe makes large Belgian style almond flour waffles. You can easily have a 1/2 serving (1/2 of the waffle) at a time if you add toppings.

Tap here to jump to the video for this recipe -- it's located directly above the ingredients list. It's the easiest way to learn how to make Almond Flour Waffles!